Trump Versus the Fed

We should back up a bit. A week ago today after returning to work from his heart attack, Kudlow — director of the White House’s National Economic Council — did an interview with Fox Business. He said he hoped the Federal Reserve would proceed “very slowly” when it comes to raising interest rates.

In speaking out, Kudlow violated one of Washington’s “norms” — the one about how the White House shouldn’t tell the Fed what to do.

The Wall Street Journal said Kudlow broke with “a 25-year White House precedent of generally refraining from commenting on monetary policy.” The paper told us this precedent was “set during the Clinton administration and followed by subsequent Republican and Democratic presidents and their advisers.”

The article begged the question of what went on before the Clinton administration.

So let’s explore a little history — because we’re sure Mr. Kudlow is acutely aware of it.

We rewind to the administration of George H.W. Bush, the last one-term president.

And as we recounted last fall, there was immense tension between the Bush White House and the Alan Greenspan Fed over the Fed’s handling of the 1990–1991 recession.

Bush appointed Greenspan to a second term in July 1991, but an Associated Press story at the time said Bush arrived at that decision reluctantly…

Over the past year, as the economy sunk into its first recession in eight years, Bush and his senior advisers have constantly pressured Greenspan and his fellow board members to stimulate an economic recovery by quickly and steeply lowering interest rates.

Central bank officials, however, have resisted loosening credit as forcefully as the administration had wanted, fearing that would lead to resurgent inflation.

Years after Bush lost his 1992 re-election bid, he groused to David Frost: “I think that if the interest rates had been lowered more dramatically that I would have been re-elected president because the [economic] recovery that we were in would have been more visible.”

Speaking of Greenspan specifically, he said, “I reappointed him, and he disappointed me.”

Are you starting to grasp the context of Kudlow’s remarks?

Here’s the thing. Going back to Ronald Reagan, every president except two has had good timing when entering the White House. Reagan… Clinton… Bush 43… Obama… They all came into office either during a recession, going into a recession or coming out of a recession. By the time they were running for a second term, the economy was “good enough” relative to when they took office that they could win re-election.

Bush 41 had the misfortune of coming into office six years and two months into an economic expansion. Trump came into office with an expansion even longer in the tooth — seven years and seven months. 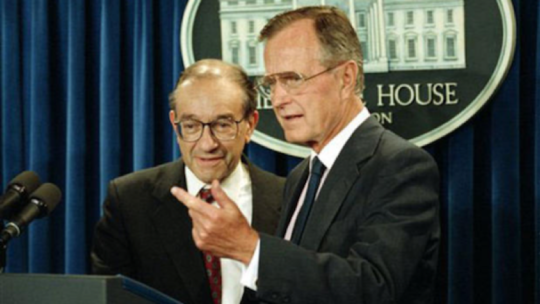 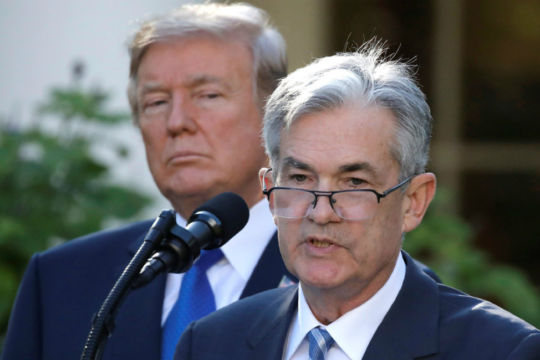 (Dig the expression on Trump’s face…)

Kudlow frets the Fed will raise rates so aggressively that in another year or 18 months it’ll choke off the expansion and slow down the economy at the very moment his boss is campaigning for a second term. That’s why he hopes the Powell Fed will move “very slowly.”

Yesterday, the Fed told Kudlow to go pound sand. That’s when the Fed released the minutes of its June meeting.

At the risk of repeating ourselves, Fed “minutes” aren’t like the minutes of your local zoning commission. They’re not an objective record of who said what. They’re a carefully crafted political document.

In the key paragraph, the minutes said some members of the Fed’s Open Market Committee expressed concern “that a prolonged period in which the economy operated beyond potential could give rise to heightened inflationary pressures or to financial imbalances that could lead eventually to a significant economy downturn.”

Translation: “We’re not going to let inflation run too hot. We’re going to keep raising the fed funds rate from 2% now to 3% by this time next year. Buzz off, Kudlow — we know what we’re doing here.”

In reality, the Fed has no idea what it’s doing, because it’s doing something never attempted before — “normalizing” rates from near-zero levels at the same time it’s trying to shrink its bloated balance sheet. The stakes are enormous and the potential for miscalculation is huge.

Grab the popcorn — it’s going to get interesting.

To the markets — which are shrugging off the formal start of a U.S.-China trade war.

But in a case of “Buy the rumor, sell the news,” the major U.S. indexes are all in the green. At last check the Dow is up a half percent, approaching 24,500. The other major indexes are up even stronger. Gold is steady at $1,250.

[Ed. note: Jim Rickards says the White House is about to unleash a volley in the trade wars that almost no one sees coming. But Jim’s contacts in Washington tell him it’s nearly a sure thing. And it’ll serve up what Jim says could be the “trade of the year” — worth as much as $140,000 to you.

Jim tells you all about it at this link. We suggest you watch it now because for reasons that will become apparent when you watch, the information could be out of date as early as midnight tonight.]

“The S&P 500 has flirted with its 50-day moving average since June 25,” points out trading specialist Greg Guenthner. “The index has now touched or crossed its 50-day line for eight straight trading days. 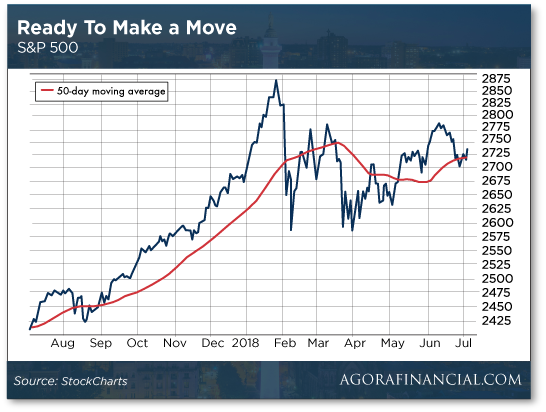 “After blowing off some steam following its spring rally, we’re looking for the major averages to find some direction here. Yesterday’s bounce marked the highest close for the S&P since it first started its dance with its 50-day moving average late last month. But there’s still work to do.”

The takeaway from the June job numbers is that people who’d given up looking for work long ago are starting to look again.

That’s what accounts for the official unemployment rate rising from 3.8% to 4%. “Labor force participation” — the percentage of people either working or looking for work — is up.

The wonks at the Bureau of Labor Statistics conjured 213,000 new jobs for the month. Unfortunately, most of those jobs are part-time and most of the people hired have, at best, a high school diploma. College grads looking for good full-time gigs with which to service their student-loan debt? Still hosed.

The real-world unemployment rate from Shadow Government Statistics inched up to 21.5%.

“There’s something a little different about how many folks celebrated the Fourth of July this year,” says Ray Blanco.

“Without a doubt, many Americans opted to use recreational cannabis legally on the Fourth — after all, in many parts of the country, this year marks the first time cannabis has been legal at the state level for recreational use.”

What’s more, “as the addressable market for pot grows, more mainstream companies are throwing their hats in the ring with cannabis-infused offerings.

“Instead of a cold beer by the grill this summer, it’s possible that some of those legal cannabis users picked up a can of Hi-Fi Hops, a new cannabis-and-hops-infused sparkling water from beer brewing company Lagunitas: 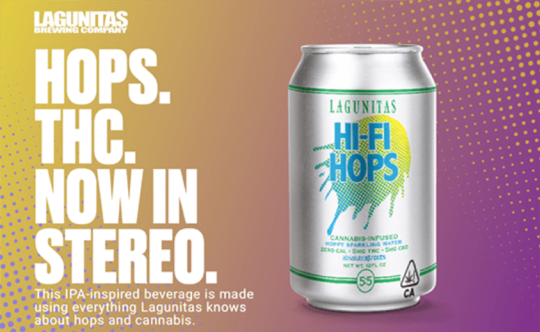 “The company’s new adult beverage features either 5 mg or 10 mg of THC per can,” Ray tells us, “with zero alcohol, zero calories and zero carbs.

“It’ll be interesting to see how Hi-Fi Hops does. It’s likely to appeal to cannabis enthusiasts as well as drinkers looking for a no-calorie alternative to alcohol. The market for these types of products could be huge.”

“That’s yet another reason why federal legalization is such a big deal — if companies can get legal nationwide distribution to states where cannabis is legal, there are going to be some big new opportunities for investors.”

But even now, Ray says opportunity abounds — you just have to know where to look.

With two consecutive years of evidence to cite, we can safely say: It’s getting increasingly dangerous to quote the Declaration of Independence.

Last year, NPR took some heat when tweeting the Declaration’s preamble, breaking it up into its constituent parts. 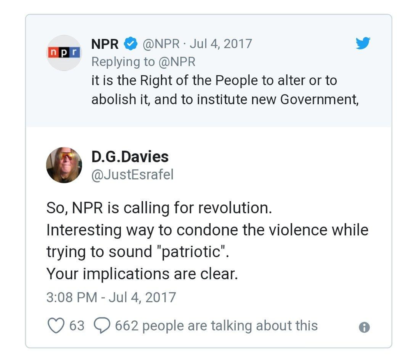 Oh, but the stupid isn’t limited only to the cult of #MAGA. This year, it turns out the #Resistance cultists at Facebook have designed their “hate speech” algorithms to flag the Declaration.

Our story begins when a small-town newspaper in Texas began posting daily excerpts of the Declaration on its Facebook page in late June. All went well for more than a week… until they got to the part laying out all of the colonists’ grievances with the Crown.

Casey Stinnett, managing editor of The Vindicator serving Liberty County, says he can’t be sure… but he’s guessing the problem came with the complaint about the king inciting “domestic insurrections amongst us, and has endeavored to bring on the inhabitants of our frontiers, the merciless Indian Savages.”

Context? No, not in Facebook’s algorithms. It deleted the post. After Mr. Stinnett appealed, Facebook reversed the deletion, sending him the following boilerplate: “It looks like we made a mistake and removed something you posted on Facebook that didn’t go against our Community Standards. We want to apologize and let you know that we’ve restored your content and removed any blocks on your account related to this incorrect action.”

While we still have Independence Day on the brain, we close with our own favorite social media posting from this week… 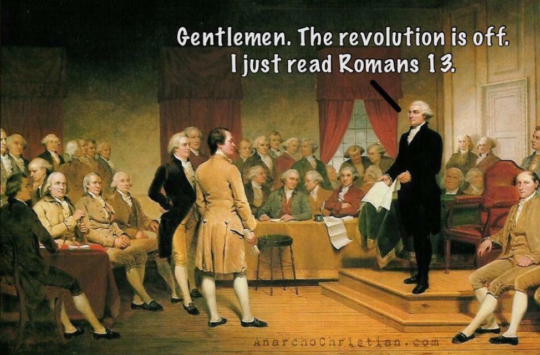 P.S. Trump isn’t the only one who can engage in punchy rhetoric: Chinese state media accuses the White House of acting like a “gang of hoodlums” with the tariffs on Chinese goods that took effect at midnight last night.

But something else might be going down in the trade wars before midnight tonight that would be a real game changer. Jim Rickards says it’s serving up “the trade of the year.”

Will you be in on it? Learn what it’s all about when you click here.