“These are companies that traders are actively betting against, expecting their share prices to fall.”

Of course, sometimes the naysayers are completely off-base and a company’s much healthier than it appears.

In which case, if you buy before traders catch on… you might win big using one of Wall Street’s most powerful and profitable strategies.

First, Zach explains what he means by “hated” stocks.

Seasoned investors don’t let emotions — for instance, hate — get in the way of making solid trades; instead, they live and die by the Dragnet principle — just the facts… heh.

“They buy and sell based on objective facts and analysis,” says Zach.

“Of course, the markets can be unpredictable, and even the smartest traders get things wrong,” he continues. But “they just close the bad trade and move onto the next one.”

“Nothing more than feelings…”

And then there are run-of-the-mill traders who react to the “slings and arrows” of market turbulence, allowing feelings like exuberance and fear to dictate when to buy and sell.

“They create reasons that a business should succeed or fail that have nothing to do with reality,” says Zach. “Then they put money on the line to try to cash in on those feelings.”

Whether motivated by facts or feelings, “when traders want to profit from a falling stock price… there are a few strategies they can use,” says Zach.

“Two of the most common are buying puts and short selling the stock.

“Puts are a type of stock option,” Zach continues. Usually, puts go up in value as a stock’s price falls.

Traders buy puts when they want to bet against a stock — and if correct (shares start to sink), they sell for a profit.

If these traders are wrong, sellers of put options get to pocket the money.

According to Zach, selling put options “is much more straightforward and less risky than the other way to profit from falling stock prices… known as short selling.”

When traders “want to bet a stock’s price will fall without using put options,” Zach says, “they can ‘short’ the stock instead.

“First, they borrow stock shares from a broker,” he says. “Then they immediately sell them on the open market, pocketing the proceeds.

“They’ll eventually have to return the shares they borrowed, though,” Zach says.

“If the trader spends less money to buy back the shares than they received for selling them, they collect a profit.”

If that’s confusing — and it’s a tricky concept — Zach has an analogy that’s up Tiger Woods’ alley (or fairway).

Say you borrow a buddy’s clubs to play a round of golf… and you have a fantastic day on the links. So much so that a fellow golfer — attributing your success to the clubs — offers to buy them from you for $500.

Hmm, you think, I know my friend bought these clubs for less than $500. So you sell the clubs and pocket the cash.

“You’re suddenly $500 richer,” Zach says, “but now you don’t have the clubs you borrowed.”

(Did we mention you’re a good friend? Heh.)

“So as soon as you get home, you head to the store that sold your friend the clubs in the first place.” You buy a new set for $400, hand them over to your buddy with a thanks and a smile… and walk away $100 richer.

“The biggest difference is that the short seller doesn’t actually know they’ll be able to buy the stock back for a lower price.

“They’re really just hoping the share price falls,” Zach says, but “these traders could very well be wrong and their bets could easily go awry.”

Here’s the thing: “If enough people have made bad bets,” Zach says, “you could collect big gains when the [stock’s] turnaround begins.”

“The first step to earning profits from turnaround stocks is to figure out which stocks have the biggest bets against them,” Zach says. “Luckily, that’s very easy to do.” 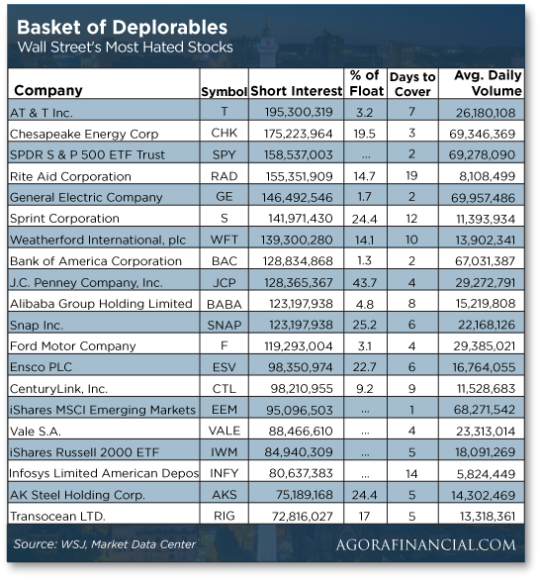 Zach uses Bank of America as an example and says: “With this information, we have a window into how many people expect the stock’s price to fall.”

“That might sound like a lot, but there are about 10.14 billion BAC shares out there. So the 128 million short interest represents just 1.3% of the outstanding shares.”

Zach says, “The bigger the percentage, the stronger the short position.”

“So if every short seller decided to close their position at once — all 129 million shares — it would represent about two days of trading.

“Armed with this information, we can determine which stocks could deliver the biggest returns if the short sellers are wrong,” Zach says, “thanks to something called a short squeeze.

“Remember, to short a stock, traders borrow shares from their broker. They sell the stock and collect the proceeds.”

They also need to return the shares to the broker; to do that, they have to buy shares on the open market.

Not a problem… “if the stock is trading for a lower price than they originally sold it at,” Zach says.

Zach says: “Short sellers can find themselves in the same position,” and “the higher the stock’s price goes, the bigger their losses could be.”

The crux of the problem for a short seller is if the stock’s price rises.

Rising prices lead to investors holding onto their stock, meaning there are fewer shares for sale.

And don’t forget, the trader’s broker can demand an immediate return of the shares — Dude, I want my golf clubs back — forcing the short seller to buy back the stock… at whatever price.

“And the more people rushing to cover their short positions,” says Zach, “the higher the price will go… That’s a short squeeze in a nutshell.”

So how can Main Street investors take advantage of a short-squeeze situation?

“FINRA’s data tell you which stocks are most vulnerable to a short squeeze,” says Zach.

“Just look for stocks with a high percentage of short interest to float and many days to cover.

“Keep in mind, though, that just because a stock is vulnerable to a short squeeze doesn’t mean one will occur.

“Sometimes traders are right and the company is due for a fall. Or the price increase could be gradual, letting traders trickle out of their short positions,” Zach says.

Zach looks at one company on FINRA’s list and thinks a “small” short squeeze might be in order….

“Ford tends to be one of those companies people like to hate,” he says. Now with Trump’s steel tariffs in play, haters are even more down on the company.

Ford’s fundamentals — however — are sound. The company churns out steady profits and pays a worthwhile dividend. 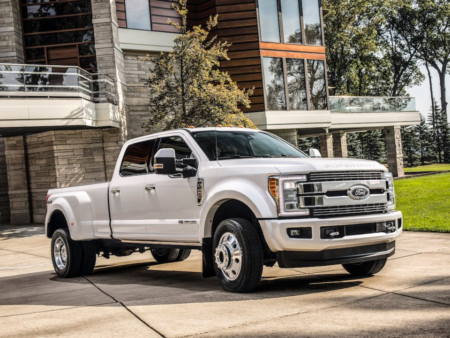 Courtesy of Ford
Ford F-Series: Best-selling vehicle in the U.S. (2017)

In the meantime, he advises to hold Ford shares…and, now that you know how to interpret the FINRA data, keep an eye out for a short squeeze.

Alan’s built a reputation for developing profitable and reliable systems and he’s excited to walk everyday folks like you through this new retirement strategy… week by week.

Imagine if that happened to you: How would that kind of weekly income change your life?]

To the markets, where the tech-laden Nasdaq index hit an all-time high yesterday, rising 1.4%, to 7,823.

Facebook and Amazon had a lot to do with the Nasdaq’s ascent — both stocks reached their high-water marks too — at $206 and $1,796 respectively.

Today the Nasdaq doesn’t appear to be slowing down; the index is up to 7,842.

Last, consumer sentiment’s pulling back so far this month to 97.1, down 1.1 points from June; 38% of those surveyed cited trade wars as a growing concern versus 21% last month.

We’ve been following the comings and (imminent) goings of the feckless subscription service for months now.

And this week, with shares of its parent company Helios & Matheson (HMNY) plummeting to 17 cents… it would seem MoviePass is about to pass. (Our condolences.) 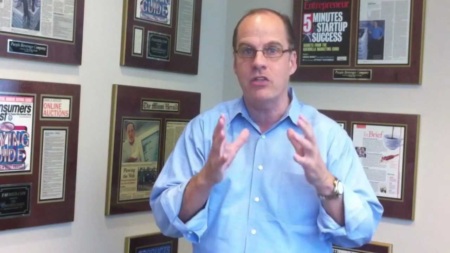 “The money issue on my side has never been an issue,” says MoviePass’ CEO Ted Farnsworth.

“I don’t mean that to be cocky or arrogant, but people see what it is. When you go to a movie theater, half of the people there have MoviePass,” he says.

Just so we’re clear: The “model” Wall Street understands is… not making any money? Because MoviePass’ financials are just awful.

“According to SEC filings, Helios and Matheson burns $21.7 million every month, causing an independent auditor to ‘[raise] substantial doubt about the company’s ability to continue.’”

In a last-ditch effort, “MoviePass introduced surge pricing last week,” which is something that Uber does, this “aimed at preventing price increases, stabilizing the company and reducing fraud.”

That doesn’t touch the fundamental problem — the company’s bleeding out cash!

To staunch the bleeding, Farnsworth expects venture capitalists and “the hedge funds on Wall Street and all that stuff” — as he said in an interview at CNN — to swoop in with their checkbooks.

All we can say is hope springs eternal….

“I hate to bring back the old complaint about how long it really takes to read The 5, but since pot’s been legal here in Vermont it’s taking hours.

“I know that’s not your fault.

The 5: We admit, yesterday’s issue got a little protracted but… sounds like you’ve been a little — heh — distracted.