You Can’t Keep a Good Market Down

Resilient. That’s the only thing we can say about the stock market’s performance in light of the day’s headlines.

Netflix, the darling stock of the year, is down 10% on the day. The company delivered a big fat miss in its quarterly numbers.

When NFLX reported after the closing bell yesterday, it looked as if the bad news was going to drag down the rest of the tech sector today. Not so — at last check the Nasdaq Composite is slightly in the green. At 7,816, it’s only 10 points off its record close last Friday. That’s resilient.

This morning’s Wall Street Journal has a front-page story about BlackRock, the world’s biggest asset manager.

Investors poured $20 billion into the company’s funds and other products during the second quarter. Which sounds massive, and it is — but not compared with $100 billion a year earlier.

These numbers matter because BlackRock runs the hugely popular iShares ETFs. For years, investors have piled into low-cost ETFs that “passively” track an index like the S&P 500 — as opposed to high-cost “actively” managed funds where a human being picks the stocks.

If money flows into ETFs are slowing, that says investors are getting skittish about the market in general. Which makes sense, given the volatility that hit the market starting in early February after a long, steady climb.

“The markets don’t care about the trade war,” said Alan Knuckman in this space yesterday. “All the bad news has already been priced in.”

But the media keep falling back on the trade war as an explanation for everything. Dow down 200 points? Must be the trade war. Interest rates rising? Trade war. Amazon’s site crashes during the first hour of Prime Day? Gotta be the trade war!

And so it goes for the slowdown in ETF investing: “Fears about a global trade war blunted growth across the ETF industry in the first half of 2018,” says the Financial Times — oblivious to the limited impact

Whatever. You can spend the rest of your days tuned into the media noise and never make any money from it.

In contrast, you can spend an hour with the aforementioned Alan Knuckman tomorrow… and it could change your life.

That’s when he’ll walk you through a new three-step system to secure your retirement — starting with an opportunity to collect $6,754 by next week.

We anticipate your objection already: “You’re going to try to sell me on one of your premium services where I don’t have enough money to play the recommendations.”

Yes, we’re going to try to sell you on a premium service. (How’s that for transparency?) But don’t think you lack the resources to execute the trades.

“This strategy is available to all income groups,” says Alan. “No worries if some investors don’t have thousands of dollars available to buy a large lot of dividend-paying stocks in order to collect a 2–5% dividend.

“The majority of the candidates I’m seeing today can be purchased in full for less than $500 — and the upside is massive!”

To learn how to collect that massive upside, we urge you to join Alan for his “Fast Fortunes Summit” tomorrow at 1:00 p.m. EDT. If you have to rearrange your schedule, we promise it’ll be worth the trouble.

Interest in this event has been huge — enough that we’re capping the number of new spots. Only 200 per hour. That’s because he’ll be talking about a specific recommendation — the one that could deliver $6,754 by next week. Sign up right here to guarantee your spot.

“We’re in a special environment with two big catalysts for the market,” says our income specialist Zach Scheidt.

Again, it comes down to the trade war chatter. “Investors are acting as if a full-blown trade war is a foregone conclusion,” Zach explains. “And so prices for most stocks affected by trade war challenges have moved to very low levels. That leaves us with plenty of room for these stocks to rebound and not that much room for them to trade any lower.

“The second catalyst is the strong economy that is helping companies grow earnings.

“Lately we’ve seen some very strong job numbers that indicate corporations are hiring more workers and paying them more money. The only reason these companies would be investing in workers like this is if they’re growing profits and have new opportunities for new employees to work on.

Speaking of economic growth, the nation’s factories are humming again after a springtime hiccup, according to the Fed’s latest figures on industrial production.

Manufacturing activity jumped 0.8% in June — which helped reverse a plunge in May driven by a fire at a parts supplier in Michigan, gumming up the supply chain.

Mining production — a category that includes oil drilling — jumped 1.2% for the month. Combine mining and manufacturing with utilities and the overall industrial production figure rose 0.6%.

The other notable economic number of the day is homebuilder sentiment: The Housing Market Index from the National Association of Home Builders clocks in at 68. The number’s been trending down for seven months now, but it remains at historically high levels.

Back to Netflix — because NFLX is key to a stock market myth Agora Financial contributor Mike Burnick is eager to bust.

“I heard the latest sky-is-falling story a few days ago,” Mike tells us, “when CNBC reported that just three stocks — count ’em, only three — have accounted for over 70% of the stock market’s gains this year.

“Specifically, Amazon, Netflix and Microsoft are together responsible for 71% of the S&P 500 Index returns year to date.

“The implication is that poor market breadth, when just a handful of high-profile companies are propping up the entire stock market, must mean the end is near.”

Just one problem with that assertion — as shown in this chart… 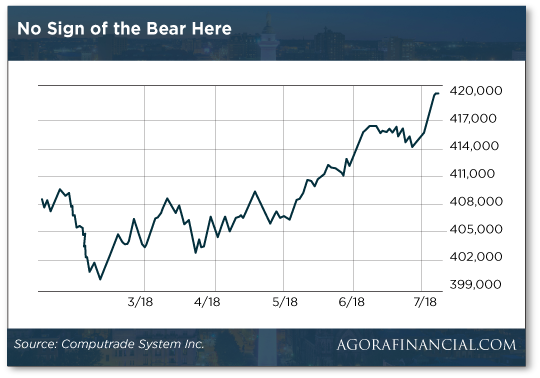 “As you can see above,” Mike explains, “the number of advancing stocks compared with declining shares on the NYSE is clearly making new highs, even though the Dow and S&P 500 aren’t.

“That’s a bullish sign that tells me most of the 1,900 stocks in this broad market index are moving higher, not just a few high-profile stocks.

“Other measures of market breadth are similarly bullish. Take the Nasdaq Composite, with over 3,000 stocks in the index. It recently hit a new all-time high, and it wasn’t thanks only to AMZN and MSFT. Those two stocks account for only 6.5% of this index.”

Conclusion: “It’s no surprise these leading tech stocks have accounted for the majority of the S&P’s feeble gains year to date.” But it’s not a sign the end is near.

Aaaand… gold has decisively cracked through the critical $1,240 level.

The excuse for the selling is Federal Reserve Chairman Jerome Powell — who’s testifying before Congress.

“Incoming data show that, alongside the strong job market, the U.S. economy has grown at a solid pace so far this year,” he says. Thus, the Fed “believes that — for now — the best way forward is to keep gradually raising” interest rates.

That’s not a dramatic shift in policy. But traders hit the “sell” button regardless. As we write, the bid is down to $1,227.

As we said yesterday, chart-watchers say there’s near-term support just above $1,200. But the tumble below $1,240 marks a break with gold’s constructive price action going back its bottom at $1,050 in late 2015. Damage like that will take time to repair, we suspect.

Now for a hard-won victory in a case we’ve been following since 2012.

It was in that year when a 24-year-old Texan named Cody Wilson developed a firearm you could download and make using a 3D printer in your own home. That’s the American spirit of ingenuity.

By 2015, Wilson and his nonprofit called Defense Distributed mustered the legal firepower to sue — along with help from the Second Amendment Foundation. (Why not the NRA? Because the NRA is first and foremost a lobby for gunmakers and 3D-printed guns threaten their business.)

The plaintiffs’ lawyers made a First Amendment argument — “I know people make it about guns, but it’s about free speech,” says attorney Josh Blackman.

Last week, the government decided to settle. The plaintiffs’ lawyers say it was evident the government’s case would go down in flames in federal court. As of Aug. 1, Wilson says his files will again be available to download. He commemorated the decision on his Twitter feed… 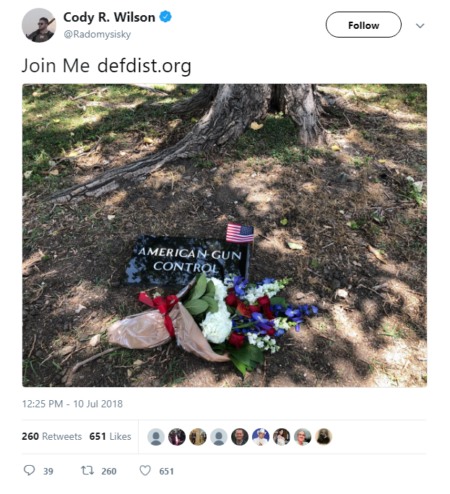 Note well: The settlement does not change the federal law that says you can make a firearm at home only for personal use, not for sale.

[For whatever it’s worth: We were unaware of the Second Amendment Foundation until this week. Seems like an intriguing organization.

Not only was it a party to Wilson’s suit, but it was among several groups that filed a brief last week asking the Supreme Court to reconsider “qualified immunity” — the legal doctrine that literally lets cops get away with murder. (Or as The New York Times put it more mildly, the doctrine “permits the authorities to avoid being sued for misconduct even when they violate the law.”) As we mentioned last fall, the NRA is too beholden to law enforcement to ever take a stand like that.]

A brief foray into the mailbag: “In your comments yesterday about Trump appointing egghead economists to the Federal Reserve I am reminded of Warren Buffett’s comment: ‘Show me a wealthy economist!’”

The 5: In the interest of accuracy we’ll cite Buffett’s actual words from 2016: “You have all these economists with 160 IQs that spend their life studying it. Can you name me one super-wealthy economist that’s ever made money out of securities?” Interesting distinction…

That said… if you play your cards right and get connected with the right people, being an economist can be pretty damn lucrative. Look at former Fed chief Ben Bernanke. The first speech he gave after stepping down in 2014 delivered $250,000. He’s collected speaking fees as high as $400,000.

And the advance he collected on his memoir, the obnoxiously titled The Courage to Act? No one’s confirmed how much it was, but informed speculation in the media ran as high as $12 million. Nice work if you can get it…