What the Media Gets Wrong About Trade Wars

What?! Only 24 hours ago, we were told that “trade war fears” were “easing” and that was the reason the Dow was jumping higher. Life comes at you fast.

So what changed? Last night, Bloomberg posted a story citing anonymous sources saying the Trump administration is looking to raise its planned tariffs on $200 billion in Chinese imports from 10% to 25%.

To be clear, we’re talking about a proposed revision to tariffs that themselves are still just a proposal.

In pre-Trump times, this sort of thing was called a “trial balloon” — a story the White House would plant with friendly reporters to see what sort of reaction it would get.

But in this new era of media silliness, it’s another HAIR–ON–FIRE moment in a 24/7 perpetual motion machine of such moments.

Remarkably, traders are seeing the trial balloon for what it is. They’re applying Knuckman’s law, as proposed by our man in the Chicago options trading pits: Wait 48 hours before reacting to anything Trump or his minions say or do. The Dow is more or less flat as we write at 25,433.

With these most recent developments as a backdrop, let’s turn to another instance of media distortion.

A few days ago, we were treated to headlines like these…

The occasions for these headlines were the Chinese yuan falling to its lowest level against the dollar in a year and a Trump tweet accusing both China and the European Union of “manipulating their currencies and interest rates lower.”

Bloomberg cited an expert who said the president’s rhetoric “is certainly shifting this from a trade war to a currency war.”

But the mainstream has it exactly backward. The trade war is an outgrowth of a currency war that began eight years ago.

As our Jim Rickards has long held, President Obama launched the currency war during his 2010 State of the Union address. Obama announced a goal of doubling U.S. exports in five years.

“The only way to do that was with a cheaper dollar,” Jim reminds us, “so the president’s policy amounted to a declaration to the world that the U.S. wanted other countries to let their currencies go up so the dollar could go down.”

The problem is that other nations can easily play the same game. “The benefits are strictly temporary,” Jim explains, “because trading partners retaliate by devaluing their own currencies. The tit-for-tat devaluations leave everyone worse off because of the uncertainty and transaction costs imposed.”

“Once it becomes clear that currency wars are a failure, nations resort to trade wars,” Jim continues.

“These begin with tariffs imposed by one nation on another to protect domestic industry and reduce trade deficits.”

Donald Trump enacted some early tariffs last year — on Canadian lumber, for instance, which has been one driver of rising prices for new homes — but the real action got going four months ago when he declared plans for 25% tariffs on imported steel and 10% on imported aluminum. “Trade wars are good, and easy to win,” the president tweeted.

Or are they? “As with currency wars,” says Jim, “the problem is retaliation. Victims of tariffs impose their own tariffs and the world is worse off.

“We’ve seen this pattern before in the 1920s and 1930s,” Jim cautions — teeing up an even bigger implication the mainstream won’t tell you.

A currency war broke out in 1921 as nations scrambled to stabilize their economies after World War I. By 1930, it morphed into a trade war as Washington enacted the Smoot-Hawley tariffs and the rest of the world followed suit.

The worrisome thing is that after a few more years, the trade war morphed into a shooting war — Asia in 1936, Europe in 1939 and finally pulling in the United States in 1941.

Jim sums up: “The present currency war began in 2010. The new trade war began in 2018. Let’s hope a new shooting war or even a third world war does not follow in sequence.”

Back to the markets today: While the Dow is stalled, standout earnings from Apple have pushed up the Nasdaq Composite half a percent.

AAPL’s report this quarter bears several similarities to last quarter’s. IPhone shipment numbers disappointed, but the company made up for it by selling more expensive models. Meanwhile, the “services” segment of the business — subscriptions to HBO, Apple Music, etc., that deliver a steady monthly revenue stream — keeps growing like Topsy.

Shares are up more than 5% on the day, pushing AAPL’s market cap to $984.6 billion. Apple is *this* close to becoming the first trillion-dollar company.

Elsewhere, Treasury yields are back on the rise — the 10-year touching 3% for the first time since late May. Crude is taking another tumble; a barrel of West Texas Intermediate is back below $68 — where it was only eight days ago.

The big economic number today is the July ISM manufacturing index. At 58.1 the number rings in well below expectations, but in this case that’s a good thing. The June number was alarmingly high thanks to tariff-driven snags in the supply chain — the worst since the 1973–74 “oil shock.” But now factories have adjusted to the new realities and delivery times are once again falling.

Gold remains mired near one-year lows around $1,220… but if you’re looking for a “contrarian” sign of a gold rebound, we’ve got it.

Last week, Vanguard announced a significant change to its gold miner mutual fund. Basically, it won’t be a gold miner mutual fund anymore. The Vanguard Precious Metals and Mining Fund (VGPMX) is being rebranded as the Vanguard Global Capital Cycles Fund “as part of a restructuring intended to broaden the fund’s mandate and diversify its portfolio.” Telecoms and utilities will be thrown into the mix along with miners. (Huh?)

Hickey points out that a powerful gold rally stalled out in 2016 the moment another fund giant, Schwab, published a “Guide to Investing in Gold.” Heh…

The rising tide of Americans surrendering their citizenship is definitely receding.

Yesterday the Treasury Department published the names of individuals who gave up their U.S. passports during the second quarter of 2018.

For the first half of the year, 2,189 Americans renounced their citizenship. At that pace, the 2018 total will once again register an annual drop… 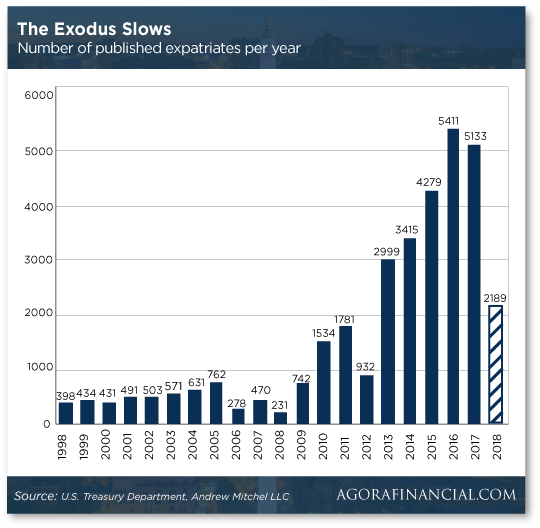 “It seemed like there was exponential growth in the number of expatriates from 2008 until the end of 2016,” says Connecticut tax lawyer Andrew Mitchel — who’s been tracking the numbers on his blog for years. “However, the numbers seem to be leveling off, or even dropping.”

Then again, the numbers might get a fresh boost from the new tax law.

It’s wicked complicated, but here’s the gist: Remember how the law is easing the tax burden for multinational corporations sitting on piles of cash overseas? Well, there is a modest tax on that so-called “repatriated” cash — just to make sure Uncle Sam gets some kind of cut.

The problem is that many small businesses owned by Americans living overseas are also ensnared by this tax. For them, the amount is not so modest. And the killer is that the money isn’t even returning to the United States.

“It’s just gotten so complicated,” Travis Baldwin tells Bloomberg News. Mr. Baldwin hasn’t lived in the states for nearly a decade. He owns an industrial design business in Great Britain employing all of four people and that’s never made more than $100,000 in a year. He figures on forking over an additional $20,000 in taxes and prep costs for next year.

Ain’t this always how it works out? Big corporations get the favors and small business gets the shaft…

Little wonder that the Association of Americans Resident Overseas says the change will drive some of its business-owning members to expatriate.

“Way to go, Dave!” begins today’s mailbag — after your editor put in a good word for the Iran nuclear deal and then zoomed out for a bigger picture.

“You really nailed it re Iran, the Mideast and the U.S. government. Anyone who wants to argue those points is shortsighted and small-pictured. Thanks for that keeper.”

“Excellent retort to the low-information individual about Iran,” writes another. “You did forget we overthrew their duly elected president and installed a carpetbag huckster who terrorized the population for two decades. And we haven’t paid the interest on the funds we froze or the contracts we voided (arms sales for millions) and kept the money.”

“Boy, there are times I hate the logical conclusions to your editorials,” writes a third. “Today is one of those days. Iran is definitely one of the most evil regimes on the planet, but your points are well taken. If I may quote an old friend of mine who also has some editorial expertise, ‘We have met the enemy, and he is us.’”

“Hoo-ah, Dave,” writes a fourth. (We promise this is the last one.)

“Expect you’ll see a lot of blowback on your U.S./Iran stance. While I might respectfully disagree with some of your comparisons and analogies, I’ll stand aside at this point to give you more room to deal with readers who have knee-jerk reactions and similar tropisms.

“Because, you know, the Israelis and particularly the Saudis are our ‘fr-r-riends (ouch).’ (See Stanley G. Weinbaum’s ‘A Martian Odyssey’ if you need the reference. Also the twin towers and the upcoming Aramco IPO.)

Iran had a more-or-less functioning democracy back then… until the United States engineered the overthrow of the elected president. Washington dispatched Kermit Roosevelt (Teddy’s grandson) and Norman Schwarzkopf Sr. (father of “Stormin’ Norman”) to Tehran to wave money around and recruit rent-a-mobs.

With the president gone, the shah did Washington’s bidding and ruled with the proverbial iron fist until simmering resentment boiled over during the 1978–79 revolution.

Americans, on the other hand, know none of this. And even if they do, they don’t seem to think it matters. In 1980, with the hostage crisis then about three months old, President Jimmy Carter dismissed the coup as “ancient history.”

P.S. We didn’t see it, but we understand Tucker Carlson did a commentary about Iran last week on Fox News.

He said, “If President Trump decides to go to war with Iran, it will destroy his presidency, just as the Iraq War destroyed the presidency of his Republican predecessor, George W. Bush.”

Mr. Carlson needs to think through his analogy more.

Bush won a second term in 2004, after all. Yes, the Republicans lost Congress two years later, but Nancy Pelosi promised immediately that impeachment was “off the table.”

Nowadays, #Resistance types look back fondly on the war and the torture and the stepped-up mass surveillance. Hell, they’ve literally embraced Bush as one of their own… 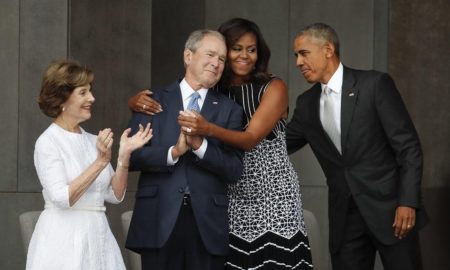 Trump would “destroy” his presidency?

If we didn’t know better, we’d swear Carlson is egging him on…