Yesterday the S&P 500 was about 1% away from reclaiming its all-time high on Jan. 26. Today that margin’s been reduced to less than half a percent. 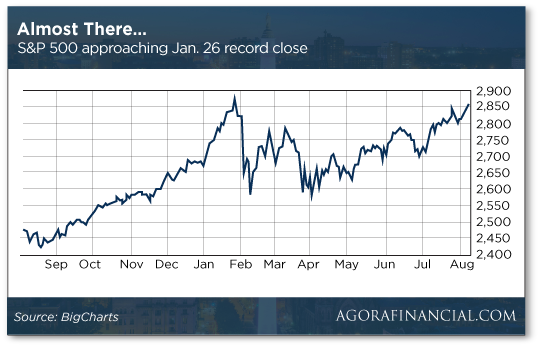 “This recovery rally is just one in a long list of comeback climbs over the last nine years,” Alan Knuckman reminds us from his perch in the Chicago options trading pits.

The catalyst for this latest comeback climb? Earnings.

“Earnings are exceeding even the loftiest expectations!” Alan enthuses. “Eighty percent of S&P 500 stocks have reported, with 80% beating on earnings per share and 74% besting revenue projections.

“The gargantuan growth in S&P earnings is currently 24%. If that number holds, it’ll be the second straight quarter of growth north of 20%.

“This has happened like clockwork since the last major correction,” Alan goes on.

“Nonbelievers get beaten and battered over and over but think this time it is different. But they’re wrong.

“Until interest rates rise where the yield is comparable to stock market returns, there is no question where money flows will go… In short, stocks win!”

Just to underscore the point: “There’s plenty of upside left in stocks as we head into the end of the year!”

And there’s another catalyst Alan sees coming — a plunge in the dollar.

Here’s the backdrop: A couple of weeks ago, Alan explained here why he thinks the U.S.-China trade war will be over relatively soon. Neither side can afford a protracted fight. For its part, the Trump administration doesn’t want to jeopardize the 4% economic growth it’s been crowing about. Forget the public posturing, he says: “The real work is being done behind the scenes to hammer out a deal that works for everyone.”

Meanwhile, the dollar had been declining steadily against other major currencies since Trump took office… until the trade war talk heated up this spring. 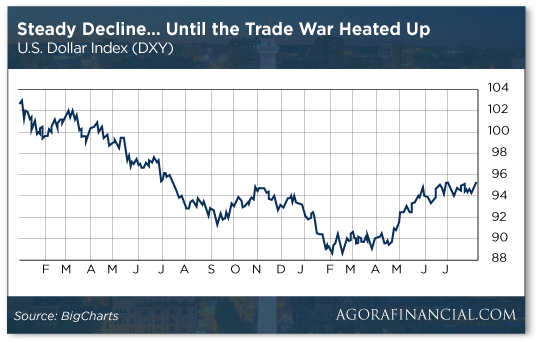 That’s because “scared money” sought a safe haven in the dollar.

What happens when that safety trade is no longer operative?

“When the trade war fighting stops, the dollar will resume its dive,” says Alan.

“The U.S. boasts the world’s largest stock market,” he explains. “And most commodities such as oil and gold are priced in U.S. dollars too.

“So when the value of the dollar falls against other currencies, it makes assets priced in dollars cheaper for investors — foreign and domestic.”

Bottom line: A falling dollar will be a tail wind for U.S. multinationals because their exports will be more affordable to foreigners. In addition, “The stocks that have taken the biggest beating on talk of tariffs — metals and mining companies — stand to soar as the dollar weakens.”

[Ed. note: For only a few more hours, Alan’s publisher is offering access to his “vertical” trading strategy. It could be “the fastest money you’ll ever make,” he says — trades that deliver one-day gains amounting to thousands of dollars. Click here and Alan will walk you through how the strategy works.]

Meanwhile, there’s a critical difference between the rally now and the rally that reversed so violently in early February.

Our Zach Scheidt talked with one of his key contacts over the weekend — an institutional investor we’ll simply identify as “Jim.”

“Do you know what is different about this march to all-time highs than the actual highs set back in January?” said Jim. “It’s not about how we got there. It’s about who got us there.”

A little cryptic, yes, but here’s how Zach explains it: “Back in January, it was all the FANG stocks that accounted for the vast majority of the market’s gains. That’s because the S&P 500 is a market cap-weighted index, meaning that companies with larger market caps have a larger impact on the index’s price.

“And the FANGs — Facebook, Amazon, Netflix and Alphabet — account for 8.5% of the index’s total weight. That’s a lot for an index of 500 different stocks!

“And if you include Apple — that group is known as FAANG — that figure jumps up to a whopping 12.75% of the S&P’s total weight.

“Can you now see why the index was going parabolic earlier this year? It wasn’t as much because of the overall market as because of this small (but popular) group of technology companies going higher.”

But now the rally is more broad-based. Heck, Facebook and Netflix stumbled hard during earnings season, but the S&P 500 kept climbing.

“That means other areas (financials, some industrials, etc.) are taking more leadership within the group. And this gives the market more ability to continue to move higher because our overall economy is growing steadily — not just the profits of a few key stocks.”

That’s the recipe for a healthy bull market, says Zach. “And as we get close to the end of earnings season, the reports from companies continue to reinforce the fact that the economy is growing and supporting a continued bull market.”

The Dow is rising even stronger — up two-thirds of a percent, to 25,666. The Big Board has more work to do to reclaim its Jan. 26 highs, but the index is still at its highest level since late February.

The Nasdaq, meanwhile, has been climbing steadily since the Facebook earnings faceplant late last month. At 7,880 the index is only two-thirds of a percent from reclaiming its all-time high of July 25.

So much for Saudi Arabia’s big promises about boosting oil production.

Six weeks ago, Saudi Arabia — along with the other OPEC nations and Russia — agreed to ease up on their production caps. Saudi Arabia for its part promised a “measurable” increase in supply.

Yeah, not so much: Reuters cites two sources within OPEC as saying Saudi Arabian production for July averaged 10.29 million barrels a day. That’s a decline of 200,000 barrels a day from June.

By the way, a host of U.S. economic sanctions against Iran went back into force today, but that doesn’t yet include sanctions on Iran’s oil exports. Those don’t kick in until early November.

About that 4% economic growth we mentioned a few moments ago: It won’t last, says Jim Rickards.

Several of the factors fueling the GDP figure during the second quarter were one-off events: “Agricultural exports definitely surged in Q2,” Jim explains, “in an effort by Asian importers to take delivery of soybeans before tariffs were imposed. The same can be said of specialized U.S. manufacturing exports.

“U.S. consumers went on a binge, but much of that was funded with credit cards where losses are already skyrocketing and a return to higher savings and less consumption has resulted.

“A lot of the standout components in Q2 have already gone into reverse. Real annualized U.S. GDP growth exceeded 4% four times in the past nine years only to head for near-zero or even negative real growth in the months that followed.

“There’s no compelling reason to conclude that Q2 2018 will be any different. Data indicating performance close to recession levels will emerge in the next few months.”

This morning, the trade in fed funds futures indicates a 96% probability the Fed will raise interest rates in September… and a 68% probability of another increase in December.

In contrast, Jim says if the weak data show up early enough, the Fed will hold off in September — certainly by December.

How to play it? “Expectations should include higher bond prices (based on lower expected yields to maturity) and higher gold prices (based on the perception that the Fed has thrown in the towel against inflation).”

On the legal cannabis beat — oh, no, scratch that — it turns out residents of Massachusetts were jumping the gun when it came to legal marijuana consumption.

Recreational weed became legal in the Bay State on July 1. But a survey commissioned by the state legislature finds 21% of respondents saying they used pot during the month of June.

Remarkably, that’s a higher percentage than in trailblazing Colorado — where recreational use has been legal since 2014! There, state data show only a 15% usage rate. (Granted, the methodology of the surveys might differ — could be an apples-and-oranges thing.)

“I’m not talking decades or years here, either. The wheels are in motion this very moment. Bills are pending in both the House and the Senate that would bring cannabis toward federal legalization if passed.

“Polls show that public support for legalizing cannabis in some form or fashion is overwhelming. Maybe it’s the only thing that Republicans and Democrats can actually agree on right now!

“Elected officials who vote against legal pot are voting against critical therapies for veterans.

They’re voting against an estimated 1 million jobs in the cannabis industry nationwide.

“States like Colorado, where recreational weed has now been legal for four years, have already demonstrated that legalizing marijuana doesn’t cause the fabric of society to unravel.

“My pot industry contacts have been filling me in on some big lobbying efforts they worked on this summer. Legislators in Washington, D.C., are going to be under a lot of pressure to get something done” — maybe as soon as they come back from summer recess after Labor Day.

In the meantime, “lots of investors are still concerned about the legal status of pot at the federal level,” Ray says. “And that uncertainty will continue to provide us with opportunities to score big wins in underfollowed pot plays.”

Behold, an ad for funeral services that was deemed unsuitable for public transportation in London…

The outfit behind the ads — a funeral price comparison site called Beyond — says its intentions are pure. The “taboo” surrounding death “creates an environment where bad actors can operate.”

Having been banned from the Tube and other public transit venues by Transport for London, Beyond took to publicizing its campaign on Facebook: “Here’s our new ad campaign which was banned by TFL for mixing death and humor — what do you think?”

P.S. All it takes is the intersection of three lines on a chart.

How does it happen? When will it happen? And most important, how can you cash in?