Why the Gold Price Doesn’t Matter

Not that we’re surprised. When the Midas metal cracked below $1,240 three weeks ago, we said the move was “technical” damage that would take time to repair.

Then again, maybe we’re thinking about it the wrong way.

Years ago, as gold was climbing from below $1,000 to its 2011 peak at $1,900, we’d point out now and then that gold wasn’t rising as much as the dollar was falling. More recently, the dollar has been rising.

“In short,” Jim tells us, “gold is up, down and sideways depending on your time frame, turning points and numeraire. The examples above are all accurate, yet I could easily produce an even wider distribution of price action by adding currencies (sterling, anyone?) and stretching or condensing the timelines.

“All of which points to a more profound issue. Simply put, there is no anchor in the system. Gold can be shown to produce enormous gains (using $35 per ounce on Aug. 14, 1971), enormous losses (using $1,950 per ounce on Sept. 1, 2011) or meaningless price moves measured in Venezuelan bolivars or Zimbabwe dollars. Take your pick.”

Here’s Jim’s point: “Whether or not you ‘made money’ in gold depends on your entry and exit points, your baseline currency and a host of other factors including taxation, local jurisdiction, etc.

“A more thoughtful analysis would say that since gold is money and we have a globally unanchored system, then you never make or lose money in gold; you just adjust the quantity of your holdings. That’s how I think about it. If I own 100 ounces of gold, that quantity by weight can go up or down (usually up), but the dollar price is irrelevant since that’s an arbitrary benchmark, not a real one.”

We anticipate your objection, especially if your gold holdings measured in dollars are “down.” Even more so if you figure on converting some of that gold back into dollars to pay for living expenses in retirement.

So Jim urges you to look at what some of the world’s major governments are doing.

“Russia,” he reminds us, “has dumped almost all of its U.S. Treasury securities holdings and other dollar-denominated assets. It acquires gold steadily, about 10–20 tons per month.

“Russia, China, Iran and Turkey are the key members of a ‘New Axis of Gold’ that is replacing dollars with gold as the key reserve asset as circumstances permit.

“What all of these moves have in common is they are not carefully timed plays for dollar profit and loss. They are outright shifts from dollars to gold without price sensitivity at the time of substitution.”

It’s all part of the “de-dollarization” process we’ve been describing for more than four years.

It was Russian media that trotted out the term “de-dollarization” in May 2014 amid tightening Western sanctions… which brings us to the news of the last 24 hours.

The Russian ruble has tumbled to two-year lows after the Trump administration announced a new round of sanctions.

Supposedly it’s punishment for the poisoning in Great Britain of a former double agent and his daughter last March — although the British government has yet to produce firm evidence that Moscow did it.

The “Putin’s puppet” rhetoric on CNN and MSNBC notwithstanding, the Trump administration has upheld all of Obama’s existing sanctions and piled on new ones in August 2017, April 2018 and now.

Little wonder Russia has unloaded most of its U.S. Treasury holdings in recent months: If Moscow doesn’t own them, Washington can’t freeze them. Meanwhile, as Jim is fond of reminding us, Russia’s gold holdings relative to the size of its economy are the biggest in the world.

So with all of that as backdrop, what role should gold play in your portfolio?

“The time has come for savvy retail investors to see gold as a simple form of money best measured by weight, not a dollar price,” Jim sums up. “Gold should be acquired in reasonable quantities (I recommend 10% of investible assets) and kept in secure nonbank storage (the banks will be shut when you most want your gold).

“There’s no harm in looking for good entry points and avoiding mini-bubbles in gold prices. Yet accumulating gold by weight without undue regard to the dollar spot price is the goal.

“If the price of gold moves sideways or down a little, you won’t make or lose much money. That’s fine; it’s like another form of cash. If gold soars, you’ll make a dollar-denominated fortune regardless of your particular entry price. That’s fine too.

“The danger is not having the gold in the first place and not being able to acquire it when the demand and price are soaring and there’s no supply. At that point, you’re just a spectator. The gold train has passed you by.”

To the markets, where stocks are steady today… the Dow down slightly… the S&P 500 and Nasdaq up slightly and within striking distance of record highs.

Crude is flat after a big tumble yesterday below $67. The mainstream attributed the drop to [spinning the Magic 8 lBall] trade war jitters. (So why didn’t stocks fall in sympathy? Sorry, we can only pose inconvenient questions in this instance.)

The big economic number of the day delivered a surprise. Wholesale prices were flat in July, compared with an “expert consensus” that expected a 0.3% jump. The big driver, we’re told, is falling energy prices — especially for electricity.

“No matter how you feel about Tesla, Musk’s tweet was stunning,” observes our Greg Guenthner. And now, the subject of a federal inquiry.

“It’s a huge claim that the funding is secured to take the company private. If that’s not true, he could be found guilty of market manipulation. I don’t expect the drama to go away anytime soon.”

Late yesterday brought word the SEC is asking whether Musk had a “factual basis” for making his claim. So far, it’s just a polite inquiry, not a formal investigation.

Behold, a story we’re told is now a sensation on Chinese social media… 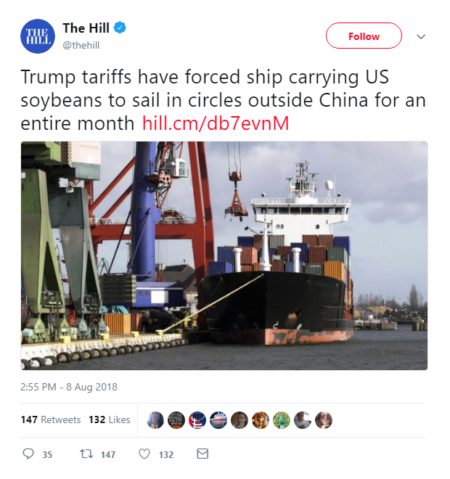 The Peak Pegasus is a bulk carrier owned by JPMorgan Asset Management. It was scheduled to unload 70,000 metric tons of soybeans at Dalian, China, on July 6 — the day Washington and Beijing imposed tariffs on $34 billion of each other’s goods.

Knowing the deadline was looming, the vessel’s crew raced to their destination — but ended up juuust a little too late. The owners of the cargo, the commodity firm Louis Dreyfus, can’t make up their minds what to do.

Thus, “The Amsterdam-based company is thought to be paying about $12,500 a day to continue chartering the ship,” reports The Guardian, “which is idling in the Yellow Sea off the coast of China, indicating extra costs so far of more than $400,000.”

Heh… For some reason we’re reminded of the “garbage barge” that spent two months in 1987 wandering aimlessly around North and Central America, looking for a place to dump 3,100 tons of trash from Long Island…

“That was a surprising, to say the least, 5 Min. Forecast,” a reader writes after yesterday’s episode about Washington, D.C.’s pressure on Silicon Valley to suppress speech the power elite disapproves of.

“Very interesting, though. I liked it a great deal. We live in interesting times, don’t we?”

“Simply excellent,” says another. “Oh, how the edgy tech barons are the masters of intolerance.”

“Thank you,” says a third, “for a very thought-provoking 5 Min. Forecast today. (Not that that is unusual.)

“Whether or not I agree with you, I feel like you guys generally give me and other readers a more accurate, less twisted view of events than the establishment media. Many thanks.”

“I especially enjoyed the P.P.S. quoting Peter Van Buren,” says a fourth. “He should have said, ‘I have successfully graduated from the re-education camp, aka FEMA camp.’ I laughed. But we really shouldn’t laugh because, after all, don’t we all love Big Brother?”

Meanwhile, “I don’t want to hear about how Facebook, YouTube, etc., are ‘private’ sites,” our resident geologist Byron King tells us via email.

Byron and I came aboard at Agora Financial within a few weeks of each other in 2007. You don’t see his name here in The 5 as often as you used to, but we still count on him to keep a pulse on the mining and energy sectors. His Renaissance-man CV includes stints as not only an oil field geologist but also a Navy flight officer and bankruptcy lawyer.

“They all use DARPA-developed operating systems,” he says. “Their signals are carried over public airwaves. They invite the public in and make their money selling data that they collect. (And it’s not just your birthday. It’s far more than nearly anyone suspects. You have to be a serious student of intel and interrogation to comprehend how much of a profile they can build from ‘your’ personal data. And now FB wants your banking data too. If it were FBI instead of FB, the airwaves would explode with Fourth Amendment concerns.)

“Actually, in a just world, these Big Platform guys ought to be public utilities — regulated to behave. Like how the electric company can’t shut you off just because you use their electrons to write things on your computer that somebody doesn’t like. Or how the water company can’t shut you off just because some valve-turner at the chlorination plant doesn’t like your politics, or the yard sign on your lawn.”

At the risk of letting the imagination run wild, the dystopian flip side to all that is the feds punishing you for speech on those platforms… by cutting off your utility service.

We’re already getting a glimpse of that with the “social credit scores” they’re using in China.

The government scrapes data from WeChat and Alibaba to determine whether someone is a “good citizen.”

“Having a low score — because you smoke, are slow to pay bills or criticize a government official — could get you barred from flying, using certain hotels or sending your kids to better schools,” writes John Stossel in his syndicated column.

Hmmm… We know U.S. officials already look rather jealously upon China’s authoritarian capabilities. In 2011 when he was still in the Senate, the unctuous and lugubrious Joe Lieberman waxed enthusiastic about how “Right now, China, the government, can disconnect parts of its internet in a case of war. We need to have that here too.”

By placing a single buy trade on Friday, and a single sell trade on Monday, you can become $9,177 richer — all while enjoying your weekend.

And you can do it every weekend.

But you have to be ready to pull the trigger on Friday afternoon. That’s why it pays to watch this event right now.