Welcome to the fourth quarter of 2018 — along with a string of oddly doom-y mainstream headline stories.

The most “optimistic,” as it were, comes from this morning’s Wall Street Journal: “U.S. stocks are entering the fourth quarter near all-time highs even as risks abound, prompting some investors to question how much farther stocks can run after a nine-year rally.”

Dig into the paper’s Op-Ed pages and the mood gets positively grim. Here’s Martin Feldstein, chairman of the White House Council of Economic Advisers during Reagan’s first term…

“As short- and long-term interest rates normalize, equity prices are also likely to return to historic price-earnings ratios. If the P/E ratio of the S&P 500 regresses to its historical average, 40% below today’s level, $10 trillion of household wealth would be wiped out.”

Here at Agora Financial, we take a back seat to no one when it comes to dire forecasts.

It was in early 2007 when Time lumped in our executive publisher Addison Wiggin with a group the magazine labeled as “the Armageddon Gang.” Mind you, this was at a time when the mainstream was still pooh-poohing the early tremors in subprime mortgages that eventually became the earthquake of 2008.

In the decade since, there’s been an explosion of free websites where you can go to “get your doom on” — where the mother of all crashes is forever just around the corner.

But around here, we don’t have that luxury. You pay our editors good money and we’d have done you a major disservice if we’d told you to avoid the stock market during its epic bull run dating back to March 2009.

That said, the epic bull run is by some measures the longest in history now. And as we’ve been saying all year, we’re definitely in the late boom phase of the boom-bust cycle.

But several of our experts say this bull market still has legs. This morning, we turn to them for supporting evidence.

“The stock market doesn’t appear to be on the brink of a devastating crash,” says chart hound Greg Guenthner. Leave it to Greg to deliver a serving of ham on wry. Heh…

“You might have noticed the Dow Jones industrial average punched through to new all-time highs two weeks ago for the first time since January.

“The 250-point rally that pushed the Dow over the edge marked the 100th record close for the index since Trump’s election. That’s not exactly bearish.” 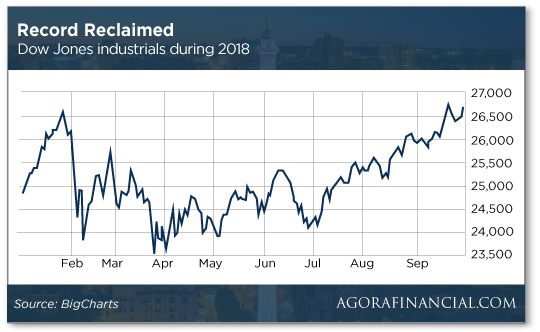 “It seems everyone is talking about how long this bull market is, and how much longer it could last,” says income maven Zach Scheidt.

“It’s a good question to ask, but as counterintuitive as it may sound, the mere fact that everyone is asking this question tells me that the risk of a major pullback is still very low.

“The end of a bull market usually happens when investors aren’t expecting anything bad to happen. I remember during the dot-com period when some of the talking heads on CNBC were predicting we would never have another major bear market because technology and information flow would keep us from getting anywhere close to a major shock ever again.

“But when you have investors who are cautious, who are worried that the bull market has gone on for too long, who are looking around the corner for the next shoe to drop, that’s a time when stock prices will NOT get out of hand.”

“The most bullish of all right now for me is a classic contrarian indicator: sentiment,” adds Infinite Income editor Mike Burnick.

And he’s not talking about just retail investors. The pros have their horns pulled in. A survey of fund managers finds them sitting on huge piles of cash — hesitant to plow it into the market. 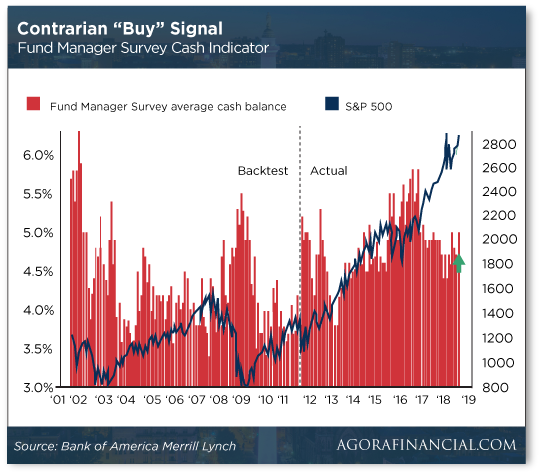 “Fund managers are now sitting about 5% in cash, near the highest levels over the past two years. This is another contrarian bullish signal, because when this stash of institutional cash flows back into stocks it can propel share prices much higher.

“In fact, the highest cash readings among fund managers over the last 20 years have almost always been great buying opportunities for stock investors, as you can see in the chart.”

Meanwhile today, the Dow is soaring more than 250 points on the back of news about a trade deal with Canada.

At last check, the Big Board is up more than 1% at 26,729. That’s still about 15 points shy of the record set 10 days ago, but still spiffy. The other major U.S. indexes are also in the green, though not as strongly, while the small-cap Russell 2000 is losing a bit of ground.

The details of the trade deal are still fuzzy, although it appears more U.S. dairy products will be shipped to Canada, while fewer Canadian-built cars will be shipped to the States. Thus Canada will be included in a new NAFTA, except the White House prefers to call it the United-States-Mexico-Canada Agreement or USMCA. Doesn’t exactly roll off the tongue…

Other developments today are likewise bullish: The big shift among the S&P 500’s 11 sectors — necessitating a boatload of buying and selling for the managers of mutual funds and ETFs — went off without a hitch. And a deal in Washington has averted a “partial government shutdown” that was due to start today. (The can has been kicked to Dec. 7.)

» Tesla is up 16% on news that the SEC’s lawsuit was settled only 48 hours after it was announced. Elon Musk can stay on as CEO, but he has to give up the chairmanship of the board for three years. (If a Musk acolyte currently on the board steps up to chairman, what’s really changed?) TSLA isn’t out of the woods — the Justice Department might still launch a criminal case

» General Electric is up 10% with the sudden removal of John Flannery as CEO after only 14 months on the job. There’s already a permanent replacement — board member Lawrence Culp.

Crude has rallied above $74, approaching its July highs — as it looks more and more as though the new U.S. sanctions on Iran will bite hard.

The Reuters newswire reports that Sinopec — one of China’s Big Three oil firms — will slash its Iranian crude imports in half.

For months, the Chinese government has signaled it won’t go along with the sanctions. But given that Sinopec is listed on the New York Stock Exchange, management presumably figures it needs to keep up appearances for Washington.

Bitcoin rests this morning at $6,600… as the next catalyst for the cryptocurrency market has been put on hold again.

Yesterday was the deadline for the Securities and Exchange Commission to approve or deny plans by the VanEck fund family to launch a bitcoin ETF. But the SEC punted for the second time in two months.

“Technically, the next deadline for a decision is Dec. 29,” says our crypto authority James Altucher. “But the government could choose to delay a final decision until February 2019.”

The stakes are huge: “The hotly anticipated bitcoin ETF would allow investors to buy a stake in bitcoin without having to set up an account on a crypto exchange,” James explains, “or deal with the paperwork and compliance headaches required for investment by major financial institutions.”

Earlier this year, the SEC denied an application by the Winklevoss twins to launch a bitcoin ETF. But VanEck has a decades-long track record running mutual funds and ETFs. And to assuage the SEC’s concerns about everyday investors taking undue risks in crypto… VanEck set the minimum investment at $200,000.

James figures the SEC will ultimately give the go-ahead: “With a final deadline approaching early next year, I believe bitcoin will rally as investors attempt to capitalize on growing interest and demand generated by an ETF.”

Applications to American MBA programs have fallen four straight years now, totaling 140,860 according to the outfit that administers the GMAT exams. Even elite programs like those at Harvard and Stanford are no longer immune from the decline.

“Americans are saddled with more college debt than ever,” explains The Wall Street Journal,
“and they have grown increasingly reluctant to leave behind jobs for a year or more to pursue one of the nation’s most expensive degrees.”

About damn time, we say.

We defy anyone to demonstrate that American business or the economy is better off for this proliferation of paper. Indeed, there might be an inverse relationship…

The path is now clear for the first legal sale of cannabis-derived medicine in the United States.

Back in June we told you how the FDA signed off on Epidiolex — a treatment for seizures in children suffering from two types of epilepsy. But a huge hurdle remained with the Drug Enforcement Administration — which also has jurisdiction because cannabis is still a Schedule I drug deemed to have “no currently accepted medical use.”

As we write, Epidiolex maker GW Pharmaceuticals is juuust below Ray Blanco’s buy-up-to price in Technology Profits Confidential. Ray’s readers have traded in and out of GWPH for 2½ years now, when the share price was less than half of current levels.

For access to his favorite picks that are still bargain priced (for the moment), look here.

We told you last month about the young woman from Fort Smith, Arkansas. In December 2017, alone at home and 11 weeks pregnant, she used her husband’s .40-caliber pistol to shoot and kill an intruder.

Prosecutors found the shooting was justified… but because earlier that year she’d pleaded guilty to a felony pot possession charge, she was forbidden from possessing or using firearms. So they charged her with being a convicted felon in possession of a gun.

Noble faced up to 24 years in prison. But last week a judge sentenced her to six years probation and a $2,500 fine. Hooray for small favors?

P.S. We take note of cases like Ms. Noble’s as a sort of cultural signpost for acceptance of cannabis — which ultimately impacts on penny pot stocks.

A year ago, we observed a huge disconnect among some advocates of the Second Amendment — not all, to be sure, but definitely those who think of themselves as “law and order” types. And because the National Rifle Association is joined at the hip with the law enforcement lobby, the NRA has been weirdly hostile to the Second Amendment rights of cannabis users.

We think now what we thought then — that the tide will turn eventually. But given how the NRA was mute about Krissy Noble’s case, the tide is taking longer than we might have expected or hoped.