Wall Street Is Worried — Should You?

“Dow falls 100 points, heads for three-day losing streak amid fears of rising rates,” said a CNBC alert moments after the open this morning.

The jump in interest rates began on Wednesday — the 10-year Treasury note vaulting from 3.05% to 3.23% by day’s end Friday. That’s a huge move in a short time… and would likely be continuing today were it not for the fact the bond market is closed for Columbus Day.

The stock market, however, is up and running today. The Dow industrials notched a record close on Wednesday at 26,834… and as we write this morning are down nearly 500 points since then.

Here’s the thing: We might be in the early stages of a decades-long rise in interest rates. Certainly that’s the opinion of Jeffrey Gundlach, the CEO of DoubleLine Capital.

In recent years, the financial media have taken to calling Gundlach “the bond king.” They used to give that title to Bill Gross, until his legendary performance began faltering a few years ago and he was forced out of Pimco, the firm he co-founded. 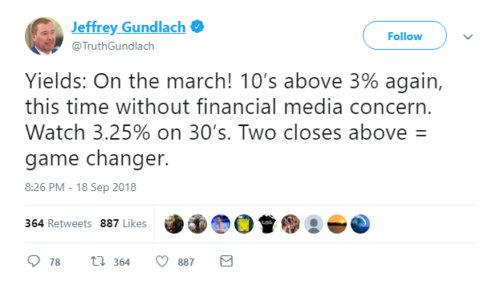 To elaborate a bit: According to Gundlach’s long-term chart work, if the yield on a 30-year Treasury bond registered 3.25% or higher at the close of trading on two consecutive days… then a decades-long downtrend in interest rates would be over.

That’s exactly what happened on Wednesday and Thursday last week. As Gundlach sees it, interest rates bottomed in the summer of 2016, and they’re now on a loooong march upward. 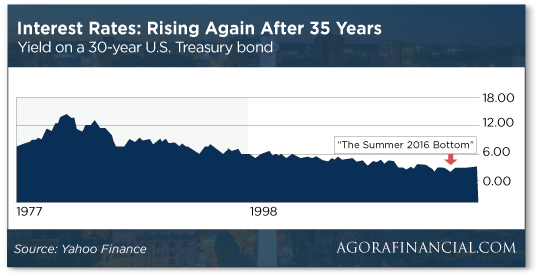 Thirty-year yields have “definitively broken above a multiyear base that should over time carry us to significantly higher yields,” Gundlach tells Reuters now.

No, it won’t be a straight line up. While interest rate peaks are short and sharp — the peak on that chart is 1981, when you could get 17% on a CD at the bank! — interest rate “valleys” like now can take as long as 14 years.

What’s more, Gundlach says the bottom in interest rates coincides, more or less, with a peak in stocks.

Global stock markets peaked on Jan. 26. While the major U.S. indexes have squeezed out new records since then, that’s not the case in most of the rest of the world. From where Gundlach sits, last January “will go down in history as the peak for the global stock market for this cycle.”

And it’s a safe bet another record run is in store over the next six weeks.

That’s because in a few more days, traders will set aside “macro” factors like interest rates, Federal Reserve policy and political uncertainty… and focus once more on corporate earnings.

Quarterly earnings season starts Friday when JPMorgan Chase and a couple of the other big banks report.

Alan Knuckman, our eyes and ears in the Chicago options trading pits, is expecting another stellar earnings season throughout Corporate America.

“As of right now, the S&P 500 earnings are expected to grow 19.3%, according to FactSet. And if that forecast holds, it’ll be one of the strongest quarters on record since 2011.

“Heck, earnings for the energy sector alone are expected to rise 94% for the period.”

But again… it’s late days for this bull market, which began in March 2009. If you feel as if you’ve missed out, this could be your final opportunity to bag the big gains that would make up for lost time.

Only a small amount of that drop can be attributed to a strengthening dollar. Mostly it’s just traders hitting the “sell” button.

Well, he didn’t put it in quite those terms, but Crown Prince Mohammed bin Salman says his kingdom has fulfilled its pledge to make up for global oil supply lost to U.S. sanctions against Iran.

As he explained it in a Bloomberg interview, “Iran reduced their exports by 700,000 barrels a day, if I’m not mistaken. And Saudi Arabia and OPEC and non-OPEC countries, they’ve produced 1.5 million barrels a day. So we export as much as two barrels for any barrel that disappeared from Iran recently. So we did our job and more.”

“MBS,” as he’s known, says if prices oil prices are near seven-year highs, that’s because of other issues, like the ongoing economic collapse in oil-producing Venezuela.

The prince had some other things to say in his Bloomberg interview — things that make us wonder how much longer the House of Saud will hang onto power. More about that as the week goes on…

We might be onto something with our theory, suggested here last week, that Donald Trump doesn’t really want a “deal” on trade with China.

From this morning’s Financial Times: “The Trump administration is seeking to stop the EU, U.K. and Japan from striking separate trade deals with China as it tries to impose economic isolation on its Asian rival.”

It turns out the new trade agreement with Canada and Mexico has a clause requiring those two countries to give Washington notice of any trade talks it has with any “nonmarket economy.”

The salmon-colored newspaper quotes an anonymous “senior White House official” as saying the administration will aim to insert a similar clause during its talks with other trading partners. “Will this be a precedent for the future?” said this individual. “Absolutely.” (Again, we have to ask, why the anonymity?)

Bush 43 trade adviser Dan Price tells the FT under this arrangement, the new rules are: “If you wish to have preferential access to the U.S. market, you may not conclude [trade agreements] with countries we don’t like.”

We suspect those new rules will only push China further along the road to “de-dollarization.” And we have new developments on that front this morning, as well…

“The Russian Finance Ministry has announced a plan to wean the country of dollar dependence,” says a story at the website of the state-run news channel RT.

The government has set a deadline to be rid of the dollar by 2024. Under the plan, Russian exporters who transact in rubles instead of dollars would get substantial tax breaks.

Hmmm… If Russian exporters demand payment in rubles, their business partners will have to go out and buy rubles on the foreign exchange markets — or even hold cash balances in rubles.

We have no idea whether it’ll work, but our Jim Rickards passes along word this morning about an early effort to get the ball rolling: The Russian oil firm Surgutneftegaz is already encouraging its customers to pay in euros and not dollars.

OK, it’s euros and not rubles, but that’s not the point: “Such efforts tend to have a snowball effect,” Jim explains. “The effort can start out on a small scale, but as more customers agree to pay euros, there’s a tipping point where the euro becomes as important as the dollar in international energy transactions.

“One company will not change the dollar payments system overnight, but it is a straw in the wind that may have important effects sooner rather than later.”

Lesson from the news this weekend: You can’t recover a shredded painting… but you can recover shredded U.S. currency.

Maybe you saw the item about how the street artist Banksy secretly built a shredder into the frame of his painting Girl With Balloon. As soon as it sold at auction on Friday for $1.4 million at Sotheby’s in London, it went into self-destruct mode… 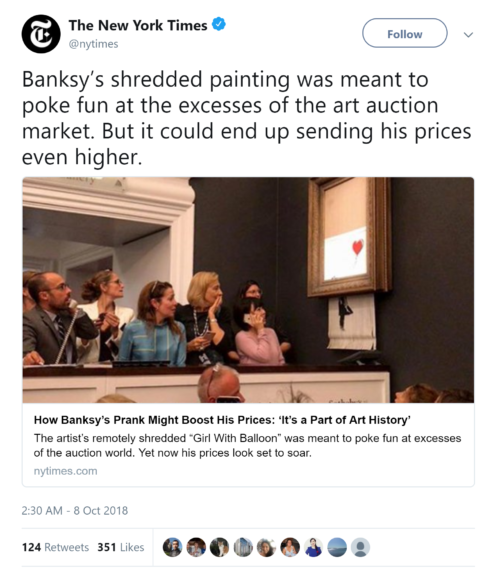 Worthless? Hardly. The website MyArtBroker, which resells Banksy pieces, now estimates the work’s value at up to $2.6 million.

“It’s become worth more as a conceptual moment than as a work of art itself,” explains dealer Offer Waterman, who was in attendance Friday.

Sotheby’s says it had no knowledge of what was about to happen, and Waterman says that’s believable. “There was no reason for them to know,” he tells The New York Times.

And then there’s the story of the toddler from Utah who put more than $1,000 cash through a shredder at home.

Ben and Jackee Belnap of Salt Lake City had tucked away $1,060 in an envelope to pay for season tickets to University of Utah football games.

Their 2-year-old son Leo contributes to the upkeep of the household by helping mom shred the junk mail.

Seeing the envelope on the kitchen counter, he knew he had a duty to perform… and did so with gusto.

His panicked parents looked all around for the missing envelope… and then realized the most likely place.

But… It turns out the U.S. Treasury Department has a Mutilated Currency Division — promising “a redemption at full value” as long as you send the mangled scrip to Washington for evaluation by “trained experts.”

Yes, you’ll have to wait as much as two years. That’s because the Treasury processes about 30,000 claims each year for an average of about $1,000 each — or $30 million total.

P.S. “Rising Yields Could Be a Big Problem for Booming Corporate Profits,” says a story at CNBC.

Well, that’s true — at least to the extent that a company is carrying a sizeable debt load and has to pay a higher interest rate on that debt. Rising debt service eats into corporate profits.

But that’s a next-year story. This year, corporate profits still look to be gangbusters.

It’s why Alan Knuckman says this upcoming earnings season — starting Friday — could be your last best chance to pull down big gains from the epic bull market that began 9½ years ago.

In other words, this Friday opens a six-week window that could be your final opportunity to cash in big.

Will you be ready? Follow this link and learn how to seize the moment.