“My prediction is that we’re going to see quite a few wild swings (both higher and lower) over the next few months,” says our income specialist Zach Scheidt.

After an ugly Wednesday and Thursday, and a Friday that barely began to make up for those losses, the major U.S. stock indexes are back in the red as a new week begins.

Not helping matters: The September retail figure out this morning laid an egg.

The “expert consensus” among dozens of economists polled by Bloomberg called for a jump of 0.6%. Even the most pessimistic guess was for a 0.3% increase.

Even if you factor out auto sales (because they’re volatile from month to month) and gasoline sales (because the rise and fall of gas prices can make the overall figure look misleading)… the number was still a huge disappointment — pancake-flat versus expectations of 0.4% growth.

Numbers like that are sure to put a hurt on the third-quarter GDP figure due at the end of this month.

“Wild swings” are what Zach lives for. Ditto for many of his premium subscribers who are hip to the opening of a “double your income” window.

You can see it on this chart of the CBOE Volatility Index — the VIX. Perhaps you’re familiar with it already. It measures the “implied volatility” in the market via S&P 500 index options. It’s sometimes called the market’s “fear gauge.”

During the peak of the fright last week, the VIX reached levels last seen during the stock market’s downdraft earlier in 2018… 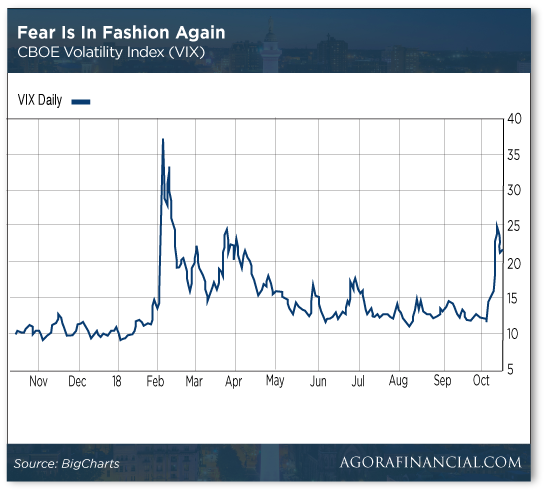 So why does Zach welcome a seemingly “bad” event like this?

It all comes back to the “perpetual income strategy” he’s evangelized about for years now.

“Every time the market becomes a little more volatile, we get to collect a bigger income payment,” Zach explains.

“Because our perpetual income strategy thrives on volatility and pulls even more cash out of the market during these periods.

“You see, our perpetual income strategy is a very reliable way to collect cash from the market week in and week out. And while that steady income is certainly helpful, there are a few time windows each year when our payments get much larger and we have an opportunity to potentially double our income.”

While the market was quiet over the summer, Zach’s recommendations were netting readers instant payouts in the range of $340–380.

Yes, the strategy involves selling options. But it’s nowhere near as intimidating as you might think. Our publisher Joe Schriefer’s been doing it in his own account for years. And he’s such a believer, he recruited grade-school kids to demonstrate how easy it is. See for yourself at this link.

The market sell-off isn’t deterring what Zach has labeled “the year of the takeover.”

This time it’s in the defense sector — a merger between L3 (LLL) and Harris Corp. (HRS). The combined company will be worth about $37 billion — not enough to vault it into the sector’s “Big Five” companies like Raytheon and Lockheed Martin — but the news is giving a lift to defense stocks in general today.

Gold is powering ahead to levels last seen in midsummer.

Crude is up slightly to $71.56… and we’re not impressed by the $400 threat coming from Saudi Arabia.

Donald Trump has sent Secretary of State Mike Pompeo to Riyadh for the proverbial “urgent talks” in light of the disappearance of Saudi Arabian journalist Jamal Khashoggi. Over the weekend, the president threatened Saudi Arabia with “severe punishment” if it turns out the regime killed and dismembered Khashoggi inside the Saudi consulate in Istanbul, Turkey.

In a headline-grabbing unofficial response from the kingdom, the chief of the Saudi-owned Al Arabiya news channel has posted an Op-Ed on his network’s website.

Writes Turki Aldakhil: “If U.S. sanctions are imposed on Saudi Arabia, we will be facing an economic disaster that would rock the entire world… If the price of oil reaching $80 angered President Trump, no one should rule out the price jumping to $100, or $200, or even double that figure.”

Whatever. If a 1973-style Arab oil boycott is in the offing, the resulting jump in oil prices will only make it economic for American firms to exploit shale deposits that aren’t economic now… and prices will climb back down, if not necessarily to present levels.

But while a boycott is an empty threat… pricing crude in yuan instead of dollars is not.

For whatever reason, that part of Aldakhil’s opinion piece was overlooked in the most-popular “$400 Oil!” stories.

“An oil barrel may be priced in a different currency, Chinese yuan, perhaps, instead of the dollar,” he writes. “And oil is the most important commodity traded by the dollar today.”

All true. The “petrodollar” arrangement emerged after the 1973 boycott, the brainchild of Secretary of State Henry Kissinger. Under this system, Saudi Arabia prices oil in U.S. dollars and uses its clout to get other OPEC nations to do the same. In return, the U.S. government protects Saudi Arabia and its allies against foreign invaders and domestic rebellions.

As long ago as 2013, we’ve been seeing signs that this arrangement is slowly coming apart. By last year, the Chinese launched an oil futures contract priced in yuan.

In his opinion piece, Aldakhil didn’t overtly threaten an end to the dollar’s status as the globe’s reserve currency. But he didn’t have to…

Meanwhile, we’re starting to see early affirmation of our thesis that the Trump administration isn’t seeking a “better deal” with China… but rather constant confrontation.

On the front page of its weekend edition, The Wall Street Journal had a long story, with four reporters contributing, headlined “U.S. Edges Toward New Cold-War Era With China.”

It describes “an emphatic shift from a ‘constructive engagement’ strategy that dates to the establishment of diplomatic ties in 1979.”

And there’s growing evidence Big Business is slowly signing on to the agenda. “There is a souring on China across Washington, even in groups that have long promoted stronger U.S.-China relations,” the story says — pointing toward complaints by the U.S. Chamber of Commerce about Beijing’s theft of “intellectual property” from U.S. businesses.

The story reminds us Trump’s ambassador to China is former Iowa Gov. Terry Branstad. He’s been an advocate of engagement with Beijing, not least because of his state’s massive grain exports to China.

The article doesn’t say so… but if Branstad is cashiered in some sort of administration shake-up… that’s a sure sign the constant-confrontation policy is on. And deepening.

On the road to greater marijuana legalization, there are bound to be setbacks… and this is one of them.

In August we told you how Wells Fargo shut down the campaign account of a candidate for statewide office in Florida because she takes donations from players in the cannabis industry. Near as we could tell, it was a first. But it also wasn’t a surprise, given how cannabis remains illegal on the federal level and banks are federally regulated.

Since then, candidate Nikki Fried won the Democrats’ nomination for agriculture commissioner. But another bank, BB&T, has denied her campaign banking services.

Understand, we take no sides in the contest for Florida agriculture commissioner. But the more headlines Fried makes for her medical-marijuana advocacy… the more likely it is Congress will move to finally clear up any ambiguity about cannabusiness’ access to banks.

Meanwhile, we’re only three weeks away from what could be groundbreaking ballot measures for recreational cannabis legalization. Our penny pot stock authority Ray Blanco says it will open up exciting new trade possibilities. Watch this space…

“Your correspondent Friday made a point of how tariffs and taxes are different,” begins a new week’s mailbag.

“I would add to your response that beyond limiting the choices of items you purchase (no U.S. alternative), there is also a cost impact on other substitute goods.

“Suppose I produce a widget here in the U.S. that is also produced in China. I have to keep my prices competitive with the imports or compete on quality. However, if the imported item goes up 25%, that lessens the pricing pressure on me. I will raise my price as much as I can to stay competitive and may even make additional profit.

“The end result is higher cost to the U.S. consumer even if he deliberately ‘buys American’ (my product). I would at least call that an indirect tax. Besides, the feds are pocketing more money through both the tariffs and taxes on my higher profit.

“Piggybacking the other readers’ comments last week, why can’t we just purchase The 5 Min. Forecast directly as a subscription itself?

“I like The 5 and look forward to reading it every day. Meanwhile, the premium service that I signed up for not only cost a solid chunk of change but following the advice given in that service has also cost my brokerage account just as much if not more than the service itself.

“My point is I find value in The 5 Min. Forecast and would rather pay for that than pay for a premium service that’s not only not bringing me any value but actually costing me value.

Any one of our entry-level newsletters — of which I count 10 now! — also gets you access.

P.S. A developing story in pharma has just come to our attention… and it’s a stunner.

It has to do with a fellow Forbes once called “the luckiest guy in the drug business”… but this is a story flying way under the mainstream’s radar.