“As corporate buying is at least taking a breather,” TrimTabs reports, “corporate insiders are ramping up share selling as the major U.S. stock market averages are at or near record highs.”

Corporate insiders sell company stock for a number of reasons — not least of which is to diversify a lopsided portfolio.

It’s the volume of selling that should set off alarms…

In August, corporate insiders sold $450 million of stock every day markets were open, totalling $10 billion for that month. That’s the largest amount this year… and close to setting a record.

So Mike’s got our attention…

And the sell-off didn’t stop there. In September, $5.7 billion of company stock sold every day of the first three weeks of the month. That’s the largest September sell-off in a decade.

“Also interesting is the fact insiders are selling the shares they purchased with their own money, i.e., their personal stock holdings,” Mike says, “while conversely buying back stocks like there’s no tomorrow with shareholders’ money.

“Corporations have authorized a record $827.4 billion of stock buybacks in 2018,” Mike continues. “What’s wrong with this picture?”

Corporations aren’t spending much on capital investment — things like new equipment, factories and technology; instead they’re spending 2.5 times the amount on buybacks.

“I find it odd, almost wrong, that insiders are using shareholder money to keep their stock propped up in order to line their pockets while they sell shares hand over fist,” Mike says.

“If I owned a stock with a massive amount of insider selling,” he says, “I’d at least have my finger sitting on the sell button ready to bail at any given moment.”

“If you want to see if the stocks you own have insider rats running to jump ship, go here.”

Here’s another shortcut: The top five companies with the most insider selling?

“As always,” says Mike, “timing is everything.”

“Rising interest rates may have been the immediate trigger for [Wednesday’s] sell-off,” Mike says, “but the reality is that the stock market has been struggling with a case of ‘bad breadth’ for several weeks now.”

(No, Mike’s not talking about halitosis… heh.) 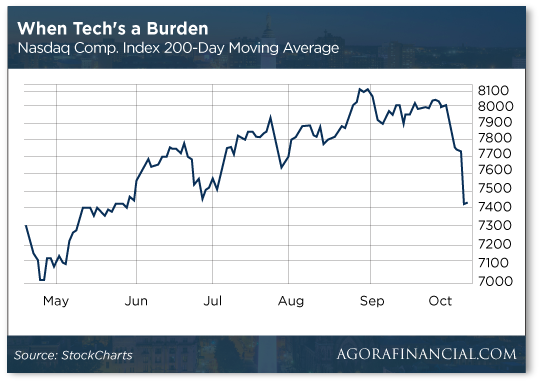 The Nasdaq was experiencing all-time highs… until the bottom dropped out of tech stocks last week.

And there’s the rub. “The trouble is fewer and fewer stocks in the index are participating in the march to new highs,” says Mike.

“For technical analysts, the 200-day moving average marks the dividing line between a bull and bear market.”

In short, over 50% of stocks were already in their own bear market bubble before what talking heads are already calling Bloody Wednesday. (Hysterical much?)

“New highs in the Dow and Nasdaq while the majority of stocks [were] rolling over to the downside” — should have hit market wonks upside the head.

“What to do?” says Mike. “I’m not ready to hit the panic button just yet.

“One bad day on Wall Street does not make it a downtrend,” he continues.

“I’ll keep you posted… but in the meantime, it makes sense to take some defensive measures.”

Mike says: “You should certainly keep a watchful eye on market breadth indicators for a signal of more trouble ahead.”

[Editor’s note: For a limited time, you can get your FREE copy of Mike’s book The Little Black Book of Income Secrets.

Born after 1943? You could collect an extra $890.07 per month from Social Security. Full instructions on Page 7.

How you can become a self-made real-estate mogul with just $500 in startup money. Page 21.

PLUS, 43 other life-changing ways to easily build your income and wealth. But you have to claim your free copy immediately. Supplies are limited. Click here for the details.

To the markets, where the Dow’s gained almost 350 points today…In fact, the market’s heading toward its best day since April.

“The U.S. federal budget deficit rose in fiscal 2018 to the highest level in six years,” says an article at CNBC.

“A spike in defense spending, as well as increases for Medicaid, Social Security and disaster relief, contributed to the increase,” the article continues.

Not to mention the GOP tax code that sliced and diced revenue. Plus, Trump’s profligate defense spending.

Of course, these numbers are always accounting fiction. We went over the real numbers at The 5 on Oct. 2.

By the way, Clinton and the Republican Congress claimed balanced budgets in the late ’90s but the national debt still grew every year.

“Positive numbers can spark double-digit moves within a single trading session,” he continues. “Heck, a well-placed trade around this time can make a trader’s year.”

“But earnings don’t have to be a high-stress trading scenario for you. If you apply the right strategy, this time of the year can be very lucrative.”

To that end, Jonas offers some timely advice…

Here are “three simple tricks that will help you take home bigger gains this earnings season.”

“The best way to avoid stepping on an earnings land mine is by not anticipating a stock’s earnings in the first place,” Jonas says.

Jonas says trying to read the tea leaves on stocks leads investors into dangerous territory. “Ninety-nine percent of the time people bet on companies ahead of earnings, they’re gambling.

“As a gambler, you’re counting on random chance to make money,” says Jonas. On the other hand, “trading is about exploiting advantages you can wring out of the market.”

“After waiting for a firm to announce its earnings numbers,” Jonas says, “you want to pay attention to how Wall Street reacts to the numbers.”

And give it some time…

“Most investors don’t realize it, but research shows that there’s an anomaly where stocks tend to move in the direction of an earnings surprise several weeks after the fact,” Jonas says.

“This is called post-earnings-announcement drift.”

Jonas says: “Stocks can continue to rally for months after posting a positive earnings surprise.”

Don’t just look for market beats, either. “A firm that misses earnings and either holds its ground or moves higher is a different story,” Jonas says. “That sort of unexpectedly positive reaction means that there’s significant exploitable strength in shares.”

“After waiting for earnings and gauging reactions,” Jonas says, “it pays to put the puzzle together by rethinking your analysis.

“Let’s say that you’re thinking about buying a stock because it was on the verge of breaking higher,” says Jonas. “But you followed my first earnings trick and waited for the numbers to come out before buying shares.

“Then, using trick two, you noticed that even though earnings were a miss, shares moved up a few points in the next session — that’s a very good sign.

“Trick three involves looking back at the original reason you wanted to buy shares and making sure that the bullish earnings clues still jive with the stock’s setup.

“If they do, you’ve got an especially strong buy signal on your hands,” Jonas says.

“Earnings can turbocharge gains on a good name, but they can’t turn garbage into gold,” he says. “That’s why it’s essential to rethink your analysis before buying.”

To be the first to know all the latest earnings guidance at Seven Figure Formula — including one bank stock recommendation that’s already popped 14% — check it out right here.

The Tom Cruise blockbuster that hit theaters in 2002 is about a futuristic task force that fights crime before it happens, based on the premonitions of a trio of “Precogs.”

While we’re not endorsing the predictive power of, say, the Psychic Network, predictive analytics is something different.

“Data is the world’s most potent, flourishing… resource,” says a blogpost at Scientific American. “Accumulated in large part as the byproduct of routine tasks, it is the… residue” that proves to be “inherently predictive.”

The article continues: “A frenzy of number crunching churns out a bonanza of colorful, valuable and sometimes surprising insights.”

For example, Walmart’s found that people stock up on Pop-Tarts in preparation for a natural disaster. In fact, Walmart sales of strawberry Pop-Tarts increase sevenfold before a smackdown from Mother Nature.

Researchers gathered data in the U.S. over the past 60 years and found the death toll’s almost three times greater when a hurricane has a feminine name.

(So… why not just assign male names to hurricanes? Duh…)

Here’s another for you: “Typing with proper capitalization indicates creditworthiness,” the article says. “Online loan applicants who complete the application form with the correct case are more dependable debtors.”

The credit-scoring agency FICO is even developing an “opt-in” feature that would allow creditors to look at “alternative data” in addition to credit scores. 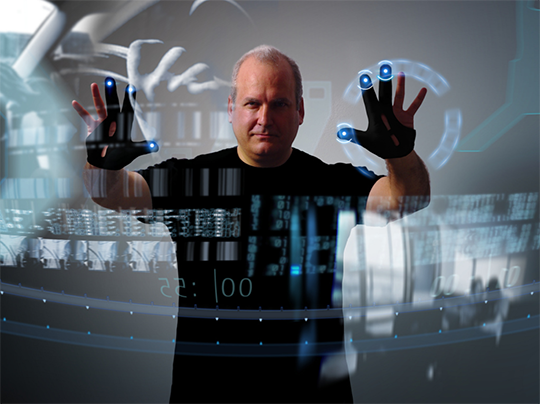 Loan denied. You didn’t dot your i’s and cross your t’s… literally.

Creditworthiness — for example — can be predicted by the cellphone you use; for the record, people with iPhones are less likely to default on loans than Android users. But if your email address contains numbers? You’re a credit risk.

The last frontier for gathering predictive data is social media… but creditors — so far — are hesitant to go there.

“No bank wants to be tagged with ‘they denied me because of my Twitter feed’ regardless of how predictive it may be,” says credit expert John Ulzheimer at MarketWatch.

While the three-digit credit score remains the gold standard, it probably won’t be long before banks look at everything from the cellphone you carry to correct grammar to determine creditworthiness.

In it, you’ll learn ways to transform your income and wealth… but you have to claim your free copy immediately.

There’s a copy with your name on it… Click here for the details.