“After decades of dealing with the war on drugs and its failures,” says an article at Vox,“Americans appear increasingly willing to try something else.”

Combating marijuana, in particular, has cost billions of dollars — paid by U.S. taxpayers — and contributed to the largest prison system in the world.

“And despite those costs, millions of people still use marijuana — a drug that most Americans view as relatively safe,” the article says. 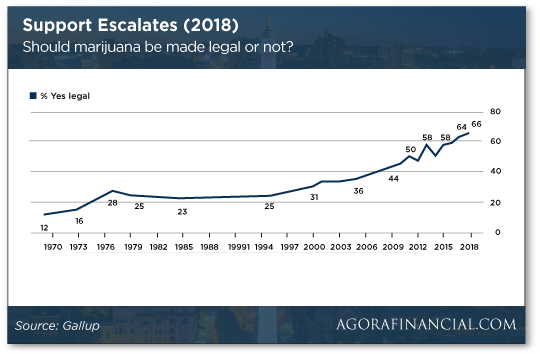 Considering majority support — over 50% — happened for the first time in 2013, that’s a lot of ground covered in just five years.

“The change in public opinion is part of a broader pushback against punitive criminal justice policies,” Vox continues.

It’s not only about the freedom to legally use cannabis — something six in 10 Americans believe is generally safer than alcohol — it’s also about moving away from stiff mandatory sentences for nonviolent drug offenses.

To go along with that, a 2014 Pew study shows 67% of Americans say drug policy should concentrate more on treatment for illicit drug users instead of prosecution.

Which leads us to decriminalization…

“Thirteen states have moved toward decriminalizing marijuana but not legalizing it,” says Vox.

In these states, “possession of small amounts of pot no longer carries criminal penalties like prison time, but possession of larger amounts and trafficking, including sales for recreational purposes, remain criminally illegal.” 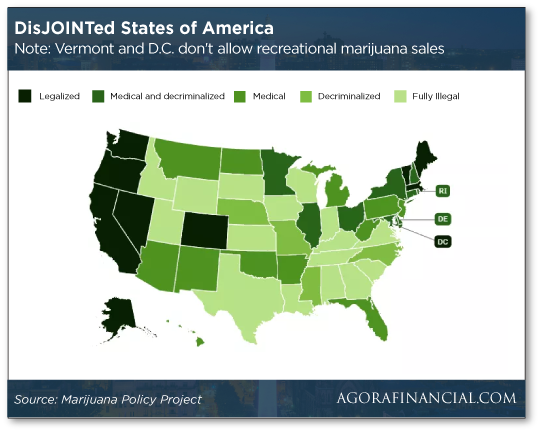 Of course, laws vary among decriminalized states; some states impose fines for small amounts of marijuana while others include a brief stint in jail. By the way, what’s considered a “small amount” varies by state, too.

“The concern… is that decriminalization keeps the ban on selling marijuana, which means users wouldn’t have a legal source for the drug,” Vox says.

To that point: “When Canada began discussing the possibility of ending marijuana prohibition nationwide,” says an article at Forbes, “Prime Minister Justin Trudeau said the move would be less about the economic benefits of legalization and more about bringing down organized crime.”

For the record, we think that’s probably a touch Pollyanna-ish…

“Criminal organizations make billions of dollars a year in profits on the sale of marijuana,” Trudeau told the Canadian Press this year. “We need to move forward on a system that controls and regulates while protecting our kids and our communities.”

(The black market’s not going to be closing shop in Canada anytime soon. The 5’s followed legal weed shortages there reported as early as one week after legalization. Chalk it up to growing pains — heh — something seen in Nevada and California.)

Regardless of snafus along the way, Canada’s a guiding light for marijuana legalization in North America… and we’re not just talking about the U.S.

“There is faith that Canada’s move to treat marijuana as part of ordinary commerce will eventually achieve its objective,” Forbes says. “So much, that Mexico’s new administration is considering a similar move to combat the drug cartels.

Incoming foreign minister Marcelo Ebrard says Mexico could “absolutely” follow in Canada’s footsteps when it comes to marijuana legalization. “We think it is a very interesting option… for Mexico.”

And Mexico’s Supreme Court handed down a ruling Wednesday that effectively legalizes recreational cannabis for adult use. No word on legalized sales, however.

So will the U.S. be sandwiched between two countries that have already legalized marijuana?

That might change in 2019 — depending on the outcome of Election Day next week.

While it’s important for states to vote on marijuana referenda, real progress — at least according to two-thirds of Americans — needs to be made at the federal level.

To that end: “U.S. Rep. Earl Blumenauer of Oregon recently introduced his ‘Blueprint’ for federal marijuana legalization,” Forbes continues. “His goal is to get started once Congress returns from the holiday break in January, fixing issues on cannabis and banking and medical marijuana access for veterans.

“Once these items are in the right spot, [Blumenauer] believes the House could be looking at a bill aimed at eliminating marijuana prohibition nationwide by September.”

And it’s not just Democrats who’re expecting change in the near future.

Former House Speaker John Boehner, who’s now on the board of cannabis investment firm Acreage Holdings, says, “Some of the most conservative politicians around [, their] views are evolving on cannabis,” he says, “just like the American people.”

[Ed. note: Because midterm elections are so critical and the opportunity is so big, our penny pot stock authority Ray Blanco’s arranged a special election night event you can watch live — where he’ll be joined by TV host and cannabis activist Montel Williams.

If you watch, you’ll be positioned to take advantage of three marijuana companies with the best potential upside right now.

The event’s scheduled for next Tuesday at 8:00 p.m. EST. You can watch FREE. Drop us your email address at this link and we’ll send you a reminder as Tuesday approaches.]

To the markets, which are getting whipsawed with every new trade war headline.

Overnight, Dow futures jumped big on rumors Donald Trump is keen to cut a deal with the Chinese this month. Then all those gains evaporated when an anonymous official threw cold water on the rumors.

At last check, the Dow is up just under 100 points.

But the Nasdaq is in the red, thanks to the quarterly numbers from Apple. Nothing wrong with the numbers, really — record sales and record earnings, thanks again to continued price increases for iPhones. But AAPL “guided lower” for the current quarter and also said it would stop reporting unit sales of iPhones on the theory that price increases have rendered the figure irrelevant.

Traders are not amused. AAPL is down nearly 7% on the day and on the verge of surrendering its lofty trillion-dollar market cap.

“There’s a mysterious spot about 20 miles off South Carolina where centuries-old gold coins have been found strewn across the ocean floor for decades,” says an article at The Charlotte Observer.

The cache of “hundreds of highly prized gold and silver coins” are believed to have gone down with the SS North Carolina, a steamship that sank in 1840 in an unusual turn of events.

“The SS North Carolina was sailing from Wilmington to Charleston when it collided with the Steamship Governor Dudley.”

“The North Carolina seemingly sank itself by heading straight into the path of [the Dudley],” the article says.

According to a blogpost at North Carolina Shipwrecks: “The Dudley’s bow… cut the Carolina almost in two” and “within 10 minutes, the North Carolina settled to her decks and soon disappeared.”

All 56 passengers on board — “including about a dozen senators and congressmen” — were rescued by the Dudley.

(Aaaand we might have just solved a maritime mystery, folks. With politicians aboard, no wonder the captain pulled into oncoming traffic so to speak… heh.)

At any rate, affluent passengers had to disembark before they had a chance to collect their valuables. One passenger alone is said to have been travelling with $20,000 worth of gold pieces. 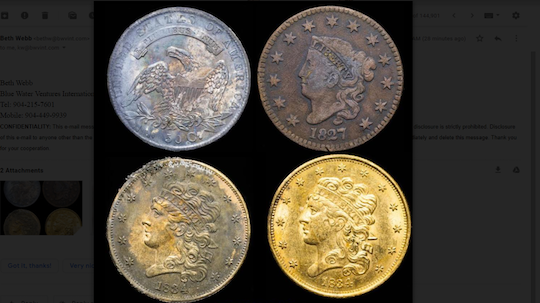 “You can imagine what they would be worth now,” says Keith Webb of Blue Water Ventures that’s partnering with Endurance Exploration Group in the shipwreck’s search.

“Some of these coins are extremely rare and would help fill in gaps when it comes to the history of American coins,” Webb says.

“Artifacts could start coming up in the next few weeks,” the article continues, “as divers map the site and do an archaeological survey… However, the bulk of the discoveries will likely be in May or June, the traditional diving season.”

“I think it’s rather unfair to hang the Ontario cannabis debacle on Doug Ford,” a reader says. “The plan for marketing cannabis in Ontario was in place before he was elected.

“The responsibility for this and many other fiascos has to lay with the previous New Democratic Party government in general and former Premier Kathleen Wynne in particular.

“A tremendous amount of damage has been done over the years. It will take the new government a long time to ‘right’ the ship.

“Always find The 5 interesting and appreciate the dry wit.”

And this from a longtime reader: “I was in the LA and San Diego areas recently and decided to compare California pot shops versus my home state of Washington.

“The comparison was stunning!

“In California, each city appears to have different requirements for buying weed. Some require seeing a doctor and getting a card.

“Others you just walk in, show ID, sign a quick sheet and circle what your ‘ailment’ is and you’re set.

“The six shops I visited were all skanky and dirty.

“At one location, only one person at a time is allowed in the buy area at a time. You must leave all of your possessions outside or with the front desk.

“I noticed that the pre-rolls are three–four times as expensive as they are in Washington.

“Upon questioning, I found out that all of their rolled product is cut with 50% tobacco, which is not listed. They said this was required by state law. So in reality the joints are six–eight times as expensive as in Washington!

“Horrible customer service and any purchases were required to be put in a thick plastic opaque black security bag before leaving the store. Sure didn’t feel like a legal product.

“Most of the stores had limited selection and what they did have appeared to be displayed and packaged similar to what you might see at a garage sale.

“The pot stores in Washington are well stocked in Class A buildings next to banks and real estate offices, at least in the southwest Washington area where I live. The employees seem to understand customer service better than almost any other business I frequent.

“They all seem to love what they do and are very friendly and helpful and are incredibly knowledgeable about the various products. They also have the ability to discuss the various strains and genetic attributes much like a sommelier for the perfect pairing.

“Of course, they keep re-electing Pelosi, so how bright can they be?”

The 5: We’ve said it before — and we’ll say it again — we treat all politicians equally… with contempt.

Don’t believe us? We just wisecracked about politicians causing a maritime disaster….

P.S. On election night —Nov.6 — the last round of marijuana millionaires could be made. And you could be one of them.

That’s why Ray Blanco has teamed up with Emmy Award-winning TV host Montel Williams to host a first-ever live broadcastshowing you everything you need to know.

Attendance is COMPLETELY free. But spots are limited…