To the best of our knowledge… George H.W. Bush is going to his grave blaming the Federal Reserve for the fact he was a one-term president.

The stock market is closed today to coincide with Bush’s funeral. That’s customary with all presidents, by the way. The last time it happened was when Gerald Ford died in 2006.

After yesterday’s losses — more than 3% on all the major indexes — a breather is welcome.

So today, we’ll revisit some history and return to a theme we first explored in the autumn of last year — the possibility Donald Trump could face the same fate as Bush 41.

There’s a good reason Trump’s is the first administration since that of Poppy Bush to publicly take on the Fed.

As for the threat Fed policy poses to his economic agenda — and by implication, his reelection prospects — he said, “I think the Fed is a much bigger problem than China.”

Bush, like Trump, regretted his choice for Fed chairman: In July 1991, Bush made the fateful decision to reappoint Alan Greenspan. 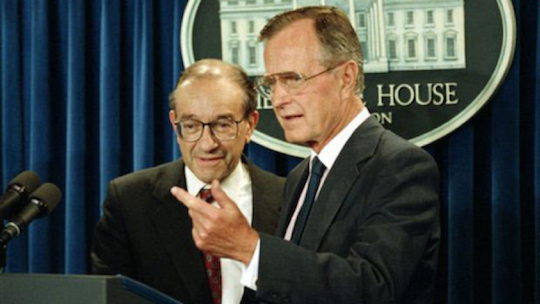 For Bush, “Stay the course” turned out to be the wrong call…

The economy was barely beginning to climb out of the 1990–91 recession. There’d been tension within Bush’s inner circle about whether Greenspan deserved another term.

From an Associated Press story at the time: “Over the past year, as the economy sunk into its first recession in eight years, Bush and his senior advisers have constantly pressured Greenspan and his fellow board members to stimulate an economic recovery by quickly and steeply lowering interest rates.

“Central bank officials, however, have resisted loosening credit as forcefully as the administration had wanted, fearing that would lead to resurgent inflation.”

At that time, the Fed was nine months into the process of lowering the fed funds rate to goose the economy.

They feared the recovery was too sluggish to ensure Bush’s re-election — a fear borne out 16 months later on Election Day 1992.

In a 1998 interview with the late David Frost, Bush pointed the finger right at Greenspan. “I think that if the interest rates had been lowered more dramatically that I would have been re-elected president because the recovery that we were in would have been more visible.”

And then the coup de grâce: “I reappointed him, and he disappointed me.”

Trump faces the same basic problem Poppy did: Both took office many years into the boom phase of the boom-bust cycle.

Of the six men elected president since 1980, Trump and Bush 41 were the only ones dealt that fate.

The others had the good fortune of entering office during a recession (Obama, Reagan)… going into a recession (Bush 43)… or coming out of a recession (Clinton). By the time those four were running for a second term, the economy was “good enough” relative to when they came in that they could win re-election.

One critical difference between Bush 41 and Trump: The Fed is raising rates. Indeed, the Fed is engaged in monetary tightening of a sort that’s never been tried in the Fed’s 105-year history.

“Don’t ever think for a minute that the central bankers know what they’re doing,” Jim Rickards told me during one of our earliest discussions in 2014. “They don’t.

“And that’s my own view, but I’ve heard that recently from a couple central bankers,” he added. “I recently spent some time with one member of the Federal Open Market Committee and another member of the Monetary Policy Committee of the Bank of England, which is their equivalent of the FOMC — both policymakers, both central bankers.

“And they said the same thing: ‘We don’t know what we’re doing. This is a massive experiment. We’ve never done this before. We try something. If it works, maybe we do a little more; if it doesn’t work, we pull it away and we’ll try something else.’”

Again, this was 2014. Back then, the experiment was near-zero interest rates and Fed purchases of Treasury debt and mortgage-backed securities.

Now the Fed is engaged in the equally unprecedented experiment of dialing all that back.

The Fed israising rates from the “zero bound” at the same time it’s selling some of that Treasury and mortgage-backed debt to reduce its bloated balance sheet. All that selling has the effect of amplifying the interest rate increases.

What are the odds they’ll pull it off without crashing the economy, the markets or both?

The Fed’s track record from plain-vanilla rate-raising cycles isn’t good: There’ve been a dozen or so of them since World War II, and the only one that ended in a “soft landing” for the economy was under Greenspan during Clinton’s first term.

How soon does it all start to fly apart?

Wall Street has settled into a consensus that says late 2019 or 2020 — right on schedule for Trump’s re-election campaign.

But as we said last week, so many people have come to believe it… that we’ll take the other side of the trade. That means either we get a shock event early next year, some out-of-the-blue thing on the scale of the 1973 oil crisis… or, less likely, the Powell Fed actually pulls off a soft landing and the economy expands for several more years. (Hey, you never know.)

While stocks and bonds aren’t trading today, it’s business as usual in the commodities pits… and oil continues to rebound sharply from its late-November drubbing.

At last check, a barrel of West Texas Intermediate is a penny away from $54 — a level last seen when crude was in free fall the day after Thanksgiving.

Gold is pulling back a bit after the big gains of yesterday and the day before, the bid at $1,237.

Effective tomorrow, recreational marijuana will be legal in Michigan.

Voters approved a ballot measure last month; it takes effect tomorrow, although the bureaucracy is such that functioning cannabusiness storefronts probably won’t be up and running till 2020.

It’s the latest development in a legalization wave both nationwide and worldwide, says our penny pot stock authority Ray Blanco.

“New Jersey lawmakers have advanced a measure to legalize recreational marijuana this week that could see a vote before the end of 2018,” he tells us.

Overseas, “South Korea’s legislators have passed an amendment to the country’s drug laws to allow medical cannabis. That puts South Korea on a path to become the first country in East Asia to make medical cannabis legal.”

The pot sector is in a momentary lull… which, if recent history holds, only means a good buying opportunity.

Cannabis stocks have been dragged down of late with the rest of the market. But they’re liable to revive, and soon. Check out a chart of our proprietary Penny Pot Index going back three years… 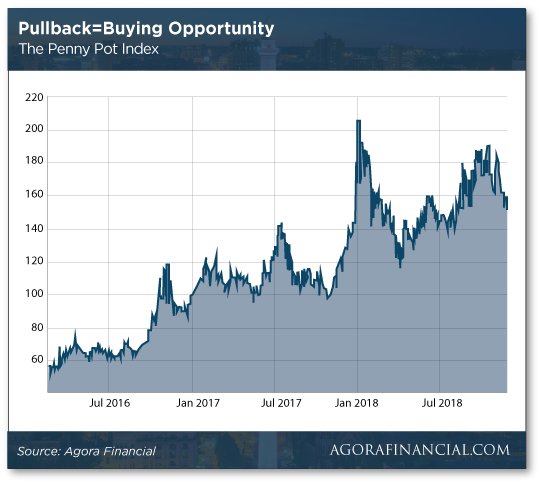 “Pot stocks keep on moving up and to the right in a major bull trend,” says Ray. “No, it hasn’t been a straight shot. There are surges and corrections. Zoom in to some of the shorter time frames and investors have repeatedly swung from exuberant to pessimistic.

“But for cannabis investors who’ve ignored the noise and simply ridden the trend higher, the results have been unbelievably lucrative.

“This is the definition of a ‘buy-the-dips market.’”

Indeed, Ray says this buying window is likely to last only a few more days — for reasons you’ll see when you click here.

Meanwhile, it’s the 85th anniversary of Prohibition’s repeal… but there’s still a keg-sized quantity of silly alcohol legislation on the books.

Or so we’re reminded in a report called “America’s Dumbest Drinking Laws” put out by the R Street Institute in Washington.

“While Prohibition has indeed been relegated to the dustbin of history, we’re still far from free when it comes to drinking,” write the report’s authors, who’ve compiled a Top 12 list of the worst laws across the land. Among our favorites… 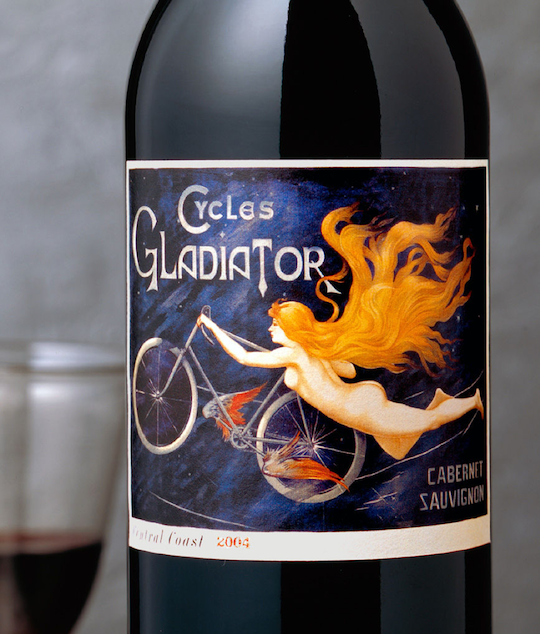 Hmmm… Can they even sell St. Pauli Girl in the Heart of Dixie?

Maybe the most outrageous of all is the ban on distilleries in Native American tribal lands — talk about perpetuating the stereotype of the “drunken Indian.”

“One of my friends in the military during the Vietnam era was a chess player who had learned Russian to study their chess books. He was turned into a military translator and given the ability to classify documents he translated.

“If the workload became too heavy, instead of translating, he would put a ‘top secret’ classification on it so his boss could not tell if he had translated it or not, as his boss was not cleared for top secret.”

The 5: Wait a minute, are you saying the military is subject to the same bureaucracy, inefficiencies and farcical fubars you find in any other arm of government?

Follow that link and you’ll learn about “Buyout Zone” trades — a system with demonstrated 95.2% accuracy and the potential to turn every $500 invested into $24,829.