OK, here’s the good news: As we write this morning, the Dow is still 1,000 points higher than it was on Christmas Eve, when it closed at a 17-month low.

The bad news is that the Dow is down about 600 points on the day. In large part that’s because after the close yesterday, Apple delivered a shock announcement — anticipating a year-over-year drop in quarterly sales for the first time in 16 years. AAPL is down about 9%.

But there’s another headline that’s got our attention this morning… the one about a massive pharma takeover.

Bristol-Myers Squibb is buying Celgene for $74 billion. If it goes through, it’ll be the biggest pharma deal ever.

Both companies are in a world of hurt right now. BMY has an immunotherapy drug called Opdivo that’s a cash cow… but its sales trail those of a rival drug made by Merck. CELG, for its part, has no obvious follow-up to its blockbuster blood-cancer therapy called Revlimid.

“The proposed union of the two companies,” says Bloomberg, “represents a big bet that combined mass will help overcome the obstacles confronting their respective cornerstone products.”

Maybe, maybe not. Regardless, CELG is up 28% at last check — roughly $85 a share. It would probably be up much more were it not for the broader sell-off on Wall Street.

Still, you wouldn’t turn up your nose at a one-day payout like that, would you?

If today is any indication, 2019 figures to be an excellent follow-up to the “year of the takeover deal”— as our Zach Scheidt said 2018 would be.

The final 2018 figures aren’t in yet… but global merger-and-acquisition activity in the first three quarters of the year totaled $3.3 trillion… up 39% from the year before.

Why would 2019 be just as strong, if not stronger?

“If you know anything about negotiations, you know that you always want to enter the discussion from a place of strength,” Zach explains.

“If a buyer needs to get a deal done, he’s going to have a hard time getting a fair price. But if a buyer can walk away from a potential deal and the seller is more desperate to reach an agreement, there’s a much better chance a deal will get done.

“Today, we’ve got a market where buyers have a lot of strength,” Zach goes on. “And that means there’s a much higher chance that buyout deals are going to happen in very short order.

“Think about it: Big corporations have a lot of cash. After all, corporate profits are on the rise, new tax schedules for 2018 allow these companies to keep more of what they earn and international companies have repatriated hundreds of billions in cash. So there’s plenty of money available to spend on buyouts.

“On the other hand, the recent decline in the market has investors on their heels. Executive teams are worried about how declining stock prices could affect their jobs. And these executives are now much more willing to entertain a buyout offer.”

Which brings us back to Celgene: Shares sank 39% in 2018 as investors fretted CELG didn’t have a “next big thing” in the pipeline. BMY’s offer was heaven-sent.

Over the last few weeks, Zach has been refining a proprietary indicator to identify the most likely takeover candidates — and we’re talking candidates with payout potential much higher than Celgene’s.

“We have four key positions in play that are tied to this indicator,” Zach says. “Best of all, we’ve been able to enter these opportunities at exceptionally low price points, giving us room for big returns once new buyout deals are announced.”

Only this morning, he recommended a play with 3,400% profit potential. And the whole story could unfold over the next two weeks.

For access to this “million-dollar moonshot” and other plays just like it, give this presentation a look right away. It’s available to watch only through midnight tonight.

Back to the sell-off today: The worry about Apple is that “As Apple goes, so goes the economy.” After all, it’s the biggest publicly held company in the world.

AAPL anticipates fourth-quarter 2018 sales of $84 billion — down from its previous forecast of $89 billion. If those numbers pan out, it would be a 5% drop from the same period a year earlier. That would amount to a big lump of coal in the holiday-sales stocking.

Blame it on disappointing iPhone sales. Yes, Americans and folks in other developed countries aren’t upgrading as often as they used to.

But the bigger concern is that Apple’s share of the still-growing Chinese market is slipping. As we pointed out last fall in the midst of a radical trade-war thought experiment, 18% of Apple’s iPhone revenues come from China. 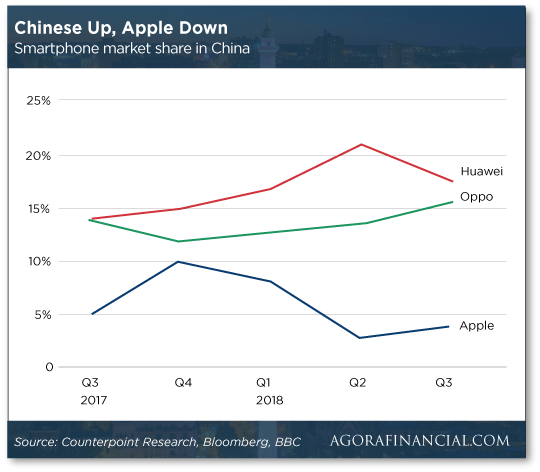 AAPL shares are now down about 38% from their peak exactly three months ago.

If Apple’s forecast pans out, it would be the first year-over-year sales drop since the first quarter of 2003.

Hmmm… Back then, AAPL was at a crossroads much as it is now. The iPod had come out two years earlier, and it was a hit, albeit a slow-burning one. And Apple was close to swinging a deal with the record companies to open the iTunes store — making legal music downloads available to the masses.

But the real turnaround didn’t happen till later that year — when Steve Jobs’ underlings wore him down and finally convinced him to release iTunes on the Windows platform and not just for Apple’s Macs. Result: Apple sold nearly as many iPods during the 2003 holiday season as it had in the preceding 2 1/2 years.

“Opening up the iPod and iTunes to Windows was the turning point that set Apple on the path to becoming the biggest, most profitable company in the world,” author Brian McCullough writes in his breezy 2018 book How the Internet Happened: From Netscape to the iPhone.

We don’t see a similar breakthrough on the horizon now. As we’ve been saying for more than three years, Apple’s been transitioning from a go-go growth company to a mature stalwart. That’s not a bad thing; it’s just different. If Tim Cook plays it right and amps up the share buybacks and dividend increases — something Steve Jobs abhorred — it will be a very good thing for AAPL shareholders.

One more caveat about Apple: This isn’t the first time the company has forecast “the first sales decline since 2003.”

AAPL issued a similar warning right around this time three years ago… and it didn’t pan out. Granted, this time Apple has revised an existing forecast downward, and that’s new.

Not helping the market today — a huge disappointment in a major economic number.

The privately issued ISM manufacturing index is out for the month of December. At 54.1, the number still signals growth in the factory sector — but the slowest growth since Donald Trump was elected president. Among dozens of economists surveyed by Econoday, no one guessed the number would be this low.

More concerning: The new orders component of the index plummeted 10 points, to 51.1 — dangerously close to the 50 level that indicates contraction, not growth.

Granted, the ISM is a survey — “soft data” as opposed to sales and shipments. But hard data will be hard to come by this month, with most of the Commerce Department closed under the “partial government shutdown.”

Strangely, the Labor Department will still issue the monthly job numbers tomorrow. We say “strangely” because those numbers were delayed during the last protracted shutdown, in October 2013.

It’s looking grim for leveraged loans — the debt instruments we warned you about in late November.

Leveraged loans are issued by banks to companies that already have a heavy debt load or a lousy credit rating.

“Loans posted a 2.5% loss in December,” Bloomberg reports, “the worst since August 2011 when S&P downgraded the U.S. AAA credit rating and loans lost 4.4% in the month.”

Bloomberg is quick to point out this year could be better: “Returns following down years were the best in the index history, which goes back to 1997, and Wall Street prognosticators expect gains of as much as 6% in 2019.”

We’re not so sure — for reasons our Nomi Prins helped us flesh out a few weeks ago. In fact, leveraged loans are the niche within the vast world of corporate debt that seems most likely to trigger a recession or bear market. (You can revisit our analysis here.)

For once, sanity prevails: A federal judge has ruled in favor of a man who ran afoul of a powerful bureaucracy simply by challenging a traffic ticket his wife got.

We told you about the case of Mats Järlström nearly two years ago. His wife had been caught by a red-light camera in Beaverton, Oregon, in 2013. For the next year or so, he drew on his engineering background to investigate the timing of yellow lights at intersections where the cameras were installed.

His conclusion: The 1950s-era timing of yellow lights didn’t account for the advent of turning lanes in the decades since. After all, you slow down for turning lanes. Many drivers were getting nabbed by red-light cameras just for making safe turns.

Järlström presented his findings to the Oregon State Board of Examiners for Engineering and Land Surveying.

The agency’s response — a $500 fine for “practicing engineering without being registered.” 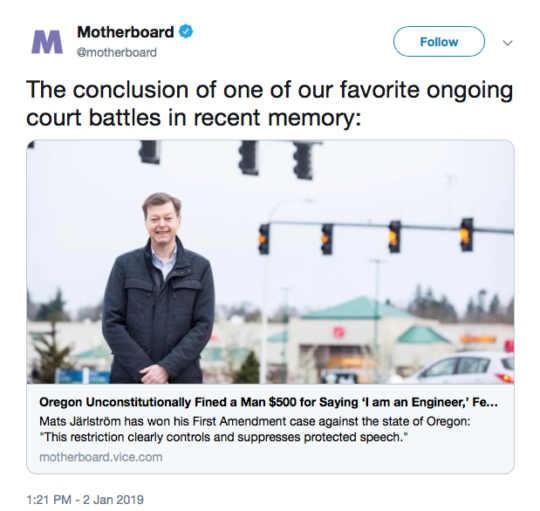 Thus, going forward, “Thousands of Oregon engineers are now free to describe themselves — truthfully — as ‘engineers,’ without fear of government punishment,” says Sam Gedge of the Institute for Justice, the heroic nonprofit that represented Järlström in court.

For the record: As of today, Paul Ryan’s 20-year career in Congress is over.

Around noontime, Democrat Nancy Pelosi took over as House speaker; Republican Ryan opted not to run for re-election last year.

Goodness knows we have no love for Pelosi, but we’re proud to say we were years ahead of the curve in calling out Ryan as a phony fiscal conservative.

In fact, we did so as soon as Mitt Romney put him on the 2012 GOP ticket — much to the chagrin of true-believer readers at the time. (You can see how much we were on the cutting edge right here. It’s probably the last time we’ll ever link to that episode of The 5. Fun while it lasted…)

Now Ryan skitters out of D.C. just in time for Uncle Sam to return to trillion-dollar deficits that he made possible as speaker. Good riddance.

P.S. Earlier in today’s episode of The 5, we showed you how lucrative it can be to own a stock that becomes a takeover target — as long as you already own that stock.

But how do you know which stocks are the most likely “buyout bait”?

Zach Scheidt has spent the last year refining a system to identify those names in advance — so you can cash in once the takeover becomes headline news.

Just this morning, Zach recommended an M&A play with 3,400% profit potential that he expects to develop over the next two weeks.

For access to this “million-dollar moonshot” — and other plays like it — take a look at the details right here. Don’t wait… it’s only available through midnight tonight.