The Recession Has Been Postponed

“Will there be recession in 2019? Definitely not!” declares James Altucher — in defiance of the early-morning headlines.

Before the market open, there was no shortage of hand-wringing over a global slowdown — fueled by Apple’s China-driven sales warning discussed here yesterday. All the chatter in 2018 about the Federal Reserve raising rates a couple of times this year turned to speculation the Fed would actually cut rates to stave off a new recession.

As we said a few times late last year, it’s become conventional wisdom on Wall Street that a recession was looming in 2019 — 2020 at the latest.

Because we’re always questioning the conventional wisdom, we turn to James — with his wealth of hedge fund and venture capital experience — for a different perspective.

In analyzing the risk of recession, he says we have to come back to first principles…

“A recession in the U.S. occurs when there is ravenous financial innovation run amok,” says James.

“First someone on Wall Street comes up with a new way to make money. Then a ton of money is made (sending the market to highs), then Wall Street goes ravenous with greed, then it comes crashing down and recession results.”

That’s how James says it’s played out with all three recessions of the last 30 years.

In the “Great Recession” of 2007–09, the “innovation” was collateralized mortgage debt.

That is, Wall Street “bundled” people’s mortgages into fancy-schmancy securities and sold them to deep-pocketed investors who didn’t know any better.

“This was like an ATM for hedge funds and banks in the mid-’00s,” James reminds us. “Banks took on so much debt that even a 1% downturn would cause them to go bankrupt (which they did).”

In the mild 2001 recession, it was… well, James says it’s too simple to call it the dot-com bust.

Specifically, it was an IPO bust, magnified by the blowup of Enron. “Wall Street suddenly saw two new ways to make money: IPOs of internet companies with no earnings. And energy deregulation and derivatives selling energy.

“There has NEVER been a greater year since 1999 for IPOs. Over $70 BILLION was raised on IPOs for companies with almost zero earnings.”

James recalls it well. “I remember starting a mobile software company in February of 2000 and within two months I had visits from Goldman Sachs, Morgan Stanley, Merrill Lynch and CS First Boston trying to get my company to IPO. On the back of their pitches was my potential net worth. Over a billion! On a company with zero revenues. Heck, I didn’t even know what we did for a living.”

As for Enron, “I won’t explain what electricity deregulation is and how it almost brought down the financial system and the electric grid in the early ’00s (look at California as an example). Suffice it to say, Wall Street made a lot of money before people figured out how to regulate the excesses.”

When it was all over, the firm Fortune declared “America’s most innovative company” for five years running turned out to be an enormous fraud.

In the mild 1990–1991 recession, there was an oil shock with Iraq’s invasion of Kuwait… but it was junk bonds that James says proved fatal to the 1980s expansion.

Junk bonds, James reminds us, were “a new financial innovation on Wall Street where Michael Milken figured that lending to companies with miserable credit ratings was a lucrative strategy.

“So banks (and corrupt savings and loans institutions) went ‘crazy with greed’ lending to companies with the WORST credit ratings and this all fell to pieces when corruption mixed with poor lending caused junk bonds to collapse.”

“Other than cryptocurrency, which has been mostly a Silicon Valley innovation and not a Wall Street one, there hasn’t been any financial innovation affecting Wall Street banks,” James says.

What’s more, at its peak a year ago, the total market cap of all cryptocurrencies was barely $800 billion. That compares with a market cap of the Dow 30 stocks totaling nearly $6.9 trillion. Even at its most dizzying heights, crypto was a pimple on the financial world’s backside. (James is still keen on crypto long term, by the way.)

James’ takeaway: “The recent market sell-off is barely a blip in the huge run we have had.

“A lot of the sell-off was tax-loss selling after years of profits. This is a good sign for January. There is no reason to think we are even close to a recession.”

Which means there’s no time like the present to jump on James’ instant-income plays. Do it right, and he says it could be worth as much as $36,000 this year. Check it out for yourself right here — James’ presentation is available to watch now through Sunday night at midnight.

Meanwhile, those early-morning concerns about a global slowdown have been put to rest (if only for today).

Among the factors in play…

Unlike during the October 2013 “partial government shutdown,” the wonks at the Bureau of Labor Statistics are still beavering away on the job figures… and they surpassed expectations.

The statisticians conjured 312,000 new jobs for December — the highest in nearly a year. And wage growth is ticking up, now 3.2% higher than a year ago.

The official unemployment rate rose from 3.7% to 3.9%. But that’s because 276,000 Americans who’d given up looking for work in recent years started looking again — so they’re once again counted as part of the workforce.

The unofficial jobless rate from Shadow Government Statistics — accounting for all the people who’ve not returned to the workforce, along with part-timers who’d like full-time work — held steady at 21.4%.

By the way, if you were wondering… yes, the shutdown will delay income tax refunds should it drag out much longer.

Last year, the IRS paid out $12.6 billion in refunds to 32 million households by mid-February. But the IRS is running a skeleton staff right now. Under those circumstances, “the IRS generally doesn’t conduct audits, respond to taxpayer questions outside the filing season or — brace yourself — pay refunds,” per The Wall Street Journal.

But if you owe… the agency still expects you to pay up. So if you’re self-employed or you get a fair amount of investment or rental income, your quarterly estimated taxes are still due in 11 more days.

Isn’t that special? Someone ought to try suing the feds on 14th Amendment grounds. Clearly, not everyone is getting “equal protection of the laws.”

Philadelphia’s soda tax is the gift that keeps on giving.

It was nearly two years ago we first mentioned how do-gooder city leaders imposed a 1.5 cent perounce tax on both sugary and sugar-free beverages. That works out to about $1 for a two-liter bottle. Among the developments we’ve chronicled since…

And now the latest development… 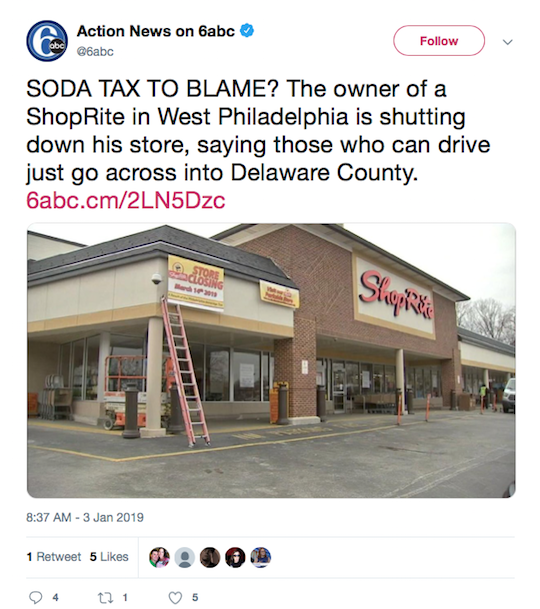 Grocery store owner Jeff Brown says his ShopRite location in West Philly has seen a 23% drop in sales since the tax came into effect. So it’s shutting down in March.

“This store is closed because of [Mayor] Jim Kenney’s beverage tax,” says Brown, “and he’s locked in, and he’s been a bully, and he’s causing harm to the people of Philadelphia.”

As it happens, the store is fairly close to city limits. It’s also in an impoverished neighborhood. So the store’s departure will surely create one of those urban “food deserts” that do-gooder liberals complain about, no?

“Full of BS,” says the subject line of a newbie reader’s email.

“I would just like to say, I receive so many worthless emails constantly wanting thousands of dollars! I think it’s all just a huge scam.

“Please stop emailing these worthless emails to me! I have already unsubscribed, however, they keep coming.

“This is my feedback for you. However, I know you will not read this and/or respond, but I am sending it anyway. Have a nice day while you scam everyone!”

The 5: Our customer care team has accommodated your request and cancelled your automatic renewal to Mike Burnick’s entry-level newsletter, Infinite Income. And you’ve been removed from The 5’s list.

Too bad you’re already gone and missing out on the fun we often have in The 5 when readers do some variation on “I dare you to print this!” It’s provided years of quality entertainment in these daily missives.

More feedback from new readers, in this case one who’s still with us: “As I am new to investing I want to be sure I understand what I am supposed to be looking for in the emails Zach sends in his Weekly Squawk Box service.

“Will he give the stock he recommends in The 5 Min. Forecast? I already see that you can make money by using his recommendations and just want stock to buy and see what will happen. I   already have made some money on the one I bought.”

What the hey, one more: “Does The 5 Min. Forecast actually send useable content?

“So far I’ve yet to read any usable/valuable content. I’m not being a smartass or facetious. I really would like to know. I can’t be the only person who thinks this.”

The 5: If by “useable content,” you mean buy and sell recommendations, no.

The recommendations are reserved for paying readers. In your case, you ponied up for a subscription to James Altucher’s entry-level Altucher Report newsletter. Again, The 5 is a free premium.

Nearly a year ago, we did an entire issue explaining who we are and what we’re all about. You can read it in full right here. Maybe we’ll rerun it in a couple of weeks on Martin Luther King Jr. Day while the markets are closed…

Kudlow has a checkered history on this score. In December 2007, at the start of the “Great Recession,” he thundered, “The recession debate is over. It’s not gonna happen. Time to move on… The Bush boom is alive and well.”

But this time, at least for the moment, we think he’s right. Reliable recession indicators we follow — like the Chicago Fed National Activity Index and the Philadelphia Fed State Coincident Index — are not flashing red or even yellow right now.

So Kudlow’s arm-waving notwithstanding, we’ll stick with James’ outlook — no recession this year, barring some bolt from the blue.

That means it’s an outstanding time to take James’ “$36,000 income pledge.” Take the pledge this weekend and it could mean an extra $750 in your pocket come Monday.

How does it work? James walks you through it when you follow this link.