$22 Trillion and Nobody Cares

Not that anyone cares, but as of yesterday the national debt exceeds $22 trillion.

“The Treasury Department reported the debt hit $22.012 trillion,” says USA Today, “a jump of more than $30 billion in just this month.”

Gee, imagine how much higher the one-month total would be if the government had been open! 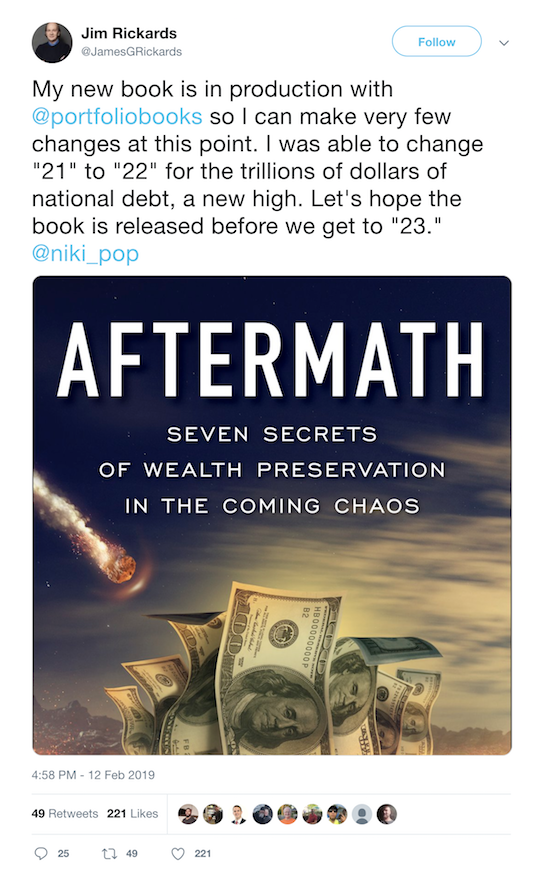 Hmmm… The book’s release is set for July 23.

But as we said, no one cares about the national debt. We know this because White House chief of staff Mick Mulvaney says so.

As we noted last week… a few hours before the State of the Union address, someone asked him whether there’d be any mention of the national debt. His reply? “Nobody cares.”

Quite the turnabout from when Donald Trump said he’d eliminate the national debt “over a period of eight years.”

That was during an interview with The Washington Post in April 2016 — when the national debt was still “only” $19.22 trillion.

By the time of his inauguration the total was $19.95 trillion. So the national debt has grown 10.3% over his first two years.

Uh, the number’s going in the wrong direction, and now he’s got only six years left to fulfill his promise.

In fairness, that 10.3% increase in the first two years is the least worst of any president since Richard Nixon.

Assuming that growth trajectory does not change and Trump serves two full terms, the national debt will grow 48% on his watch. That’s not as good as Bill Clinton, but it’s better than Bush 43 or Obama or especially Ronald Reagan. 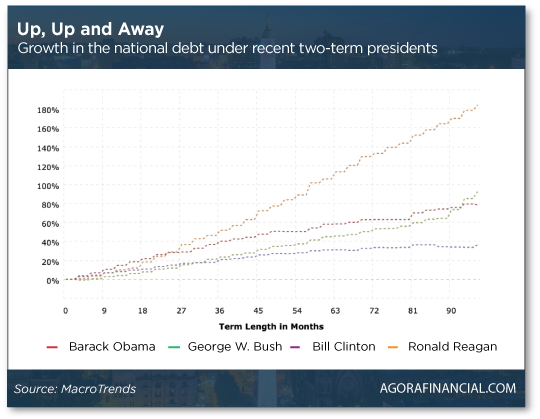 But that’s assuming 1) interest rates don’t rise in the next six years, adding that much more to the debt burden (maybe, but don’t bet on it)… and 2) we avoid a recession in the next six years (nearly impossible). The first two years rarely tell how the rest of a president’s tenure will go.

Even the current $22 trillion figure “is another sad reminder of the inexcusable tab our nation’s leaders continue to run up and will leave for the next generation,” say former Gov. Ed Rendell (D-Pennsylvania) and former Sen. Judd Gregg (R-New Hampshire), co-chairs of the Campaign to Fix the Debt.

Mulvaney entered Congress on the tea party wave in 2010 and quickly made a name for himself as a deficit hawk. He was on the front lines of the debt-ceiling battles through most of the Obama years, often defying House GOP leadership who were all too eager to cut budget-busting deals with Obama.

When Trump nominated Mulvaney to be White House budget director, Mulvaney held fast to his hawk cred during Senate confirmation hearings: “We can turn this economy and this country around… but it will take tough decisions today in order to avoid impossible ones tomorrow.”

That was January 2017. By October of that year, he was confronted by Fox News’ Chris Wallace about his support for a big tax cut without any offsetting spending cuts. His actual words: “We need to have new deficits…

“If we simply look at this as being deficit-neutral, you’re never going to get the type of tax reform and tax reductions that you need to get to sustain 3% economic growth. We really do believe that the tax code is what’s holding back the American economy.” 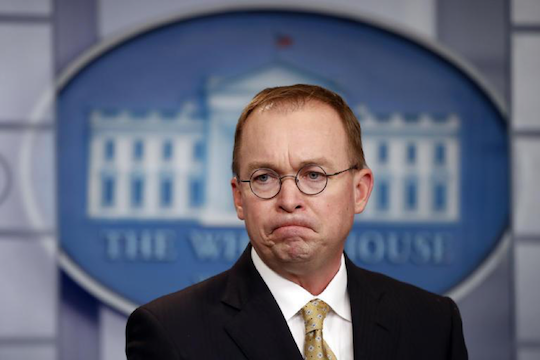 Mulvaney with a severe case of indigestion after swallowing his principles…

Fast-forward to now and Mulvaney can’t even bring himself to end one of the most egregious boondoggles in the entire federal budget. Instead, he’s expanding it.

It’s called “overseas contingency operations.” In theory, OCO is the amount of money the Pentagon spends on fighting wars, above and beyond the regular Pentagon budget.

Back in Obamatime, Mulvaney rightly denounced it as a “slush fund” to get around mandatory spending limits. During his confirmation hearings, he said he wanted to eliminate OCO.

But according to Foreign Policy, the Pentagon’s 2020 budget request will include a doubling of the OCO account, to a size last seen more than a decade ago when 170,000 U.S. troops were still deployed in Iraq.

The Pentagon’s budget is capped by law for fiscal 2020 at $576 billion. To end-run that limit, OCO would soar as high as $174 billion. “Entire programs, such as the U.S. Army’s accounts for ammunition and training, will be moved to this war account, according to multiple sources,” says the magazine.

Oy. We could go on, but let’s turn to other matters…

The stock market is adding to yesterday’s gains as it appears more likely that 1) a new government shutdown will be averted come Friday and 2) the March 1 trade war deadline might slide.

The Labor Department reports the consumer price index for January was flat. Year over year, that works out to an inflation rate of 1.6%, the lowest since June 2017.

As always, any resemblance to your own cost of living is purely coincidental. The real-world inflation rate from Shadow Government Statistics clocks in at 9.3%. But that too is the lowest since June 2017.

Either way, there’s no pressure for the Federal Reserve to change course and start raising interest rates again…

Gold remains steady in the low $1,310s — an impressive performance in light of recent dollar strength.

The dollar index is up more than 1.5% the last two weeks, but gold has managed to hold on above that $1,300 handle.

Elsewhere in the commodity complex, crude is soaring after the latest inventory numbers from the Energy Department — up more than a buck past $54.

Don’t hold your breath, but there’s a move in Congress to exempt gold and silver from income tax.

For many years, the tax code has treated precious metals as “collectibles.” That means if you sell coins or bullion in exchange for Federal Reserve Notes, any increase in the dollar value is subject to a capital gains tax of 28%.

“My view, which is backed up by language in the U.S. Constitution, is that gold and silver coins are money and are legal tender,” Rep. Alex Mooney (R-West Virginia).

Thus Rep. Mooney has introduced the Monetary Metals Tax Neutrality Act. “If they’re indeed U.S. money, it seems there should be no taxes on them at all. So why are we taxing these coins as collectibles?”

Alas, prospects for passage appear somewhere between slim and none, and Slim just departed for his bug-out retreat with a roll of new-issue Silver Eagles. Several days after Mooney submitted his bill, it has yet to pick up a single co-sponsor. 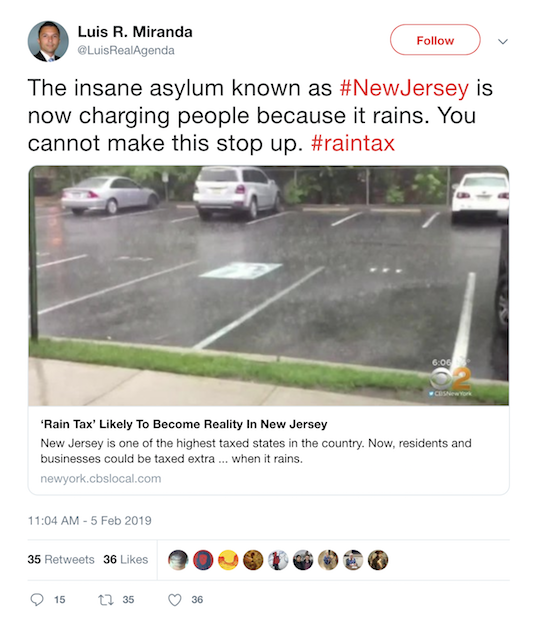 If you’re a longtime reader, you might remember this one: In 2012, Maryland enacted a “rain tax” or “flush fee” — a surtax to water and sewer bills, amounting to about $30 a year for a typical homeowner. Allegedly the purpose was to lessen stormwater runoff and thus help clean up Chesapeake Bay.

The tax was so unpopular it was sort of repealed in 2015. That is, county governments were no longer required to collect the rain tax, but they still had to demonstrate progress to the state on controlling runoff.

That object lesson is clearly lost on New Jersey’s new governor, Phil Murphy. (What is it about Goldman Sachs executives like Murphy and Jon Corzine becoming governor of the Garden State?)

“A new bill calls for the creation of local or regional stormwater utilities, giving local counties and municipalities the power to collect a tax from properties with large paved surfaces such as parking lots,” reports New York’s WCBS-TV. Both homes and businesses would be subject to the tax. It’s already passed both houses of the legislature and Murphy is set to sign it.

Bonus points: Not all the money would stay on the local level; the state would collect a 5% cut.

We’ve said nothing about border walls this year, but a Platinum Reserve member feels compelled to weigh in regardless today, and as long as we’ve got the government’s dollars and cents on the brain…

“If $1.4 billion is only good for 55 miles of fence (excuse me, ‘barrier’), there must be some government contractors collecting a big payoff. That comes to about $25 million per mile, or $5,000 per foot of barrier.

“I have a hard time visualizing what kind of barrier that much money might buy, but I can’t help but believe that some contractors will be able to retire on the proceeds from this one job. Talk about transferring tax dollars back to the private sector!”

After recounting the history of JPMorgan Chase’s “rescue ” of Bear Stearns in 2008 yesterday, a reader writes…

“And what guarantees did JPM get for agreeing to take on Bear’s short silver book that was hemorrhaging money?

“Indemnity from prosecution for violating securities law for lo these many years… a pledge to ignore their periodic bear raids and daily market rigging?

“Yeah. No mention of how much THAT’S been worth to them. It’s nice to have the ‘regulator’ in your pocket.”

The 5: You inspired us to dig into The 5’s voluminous archives, where we find a nearly $1 billion settlement JPM made with the feds in 2015 for rigging currency trades.

It was one of those cost-of-doing-business fines the feds have imposed on the banks in the decade since 2008 to make it look as if they’re being tough.

In announcing the settlement to clients, JPM included this lawyerly boilerplate that still makes the jaw drop…

As a market maker that manages a portfolio of positions for multiple counterparties’ competing interests, as well as JPMorgan’s own interests, JPMorgan acts as principal and may trade prior to or alongside a counterparty’s transaction to execute transactions for JPMorgan… [Emphasis added.]

But hey, JPM CEO Jamie Dimon is one of the few bankers to ever attain billionaire status, so it’s all good, right?

We’ve credited your account because one of our leading editors has discovered how you can collect one-day “bonuses” of up to $42,333.

Hundreds of your fellow readers have claimed this credit already.

But it comes off the table tomorrow.