Ah, the jokes almost write themselves… 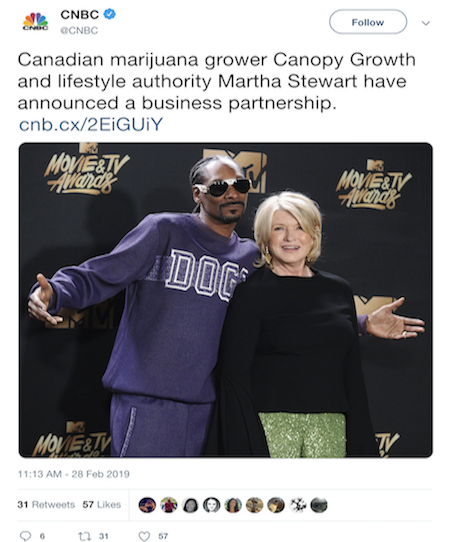 The hostess with the mostest is becoming an adviser to the Canadian cannabis giant Canopy Growth, developing a line of CBD products.

“That’s not as strange of a combination as it may sound,” says our penny pot stock authority Ray Blanco.

“Stewart, after all, is friends with rapper and noted cannabis ‘enthusiast’ Snoop Dogg, who has his own business partnership with Canopy. She’s also a consumer products maven whose brand can be found on a mountain of products at more than a dozen retailers.

“The partnership will kick off with CBD products for pets. While much of the attention on CBD has been focused on human health benefits, using cannabis for animal health is a growing area of research — and a booming business.”

“The deal is notable because of Martha Stewart’s demographic,” Ray adds.

“According to a retail survey, more than 20 million women said that they would go to a store specifically because it carries Martha Stewart products.

“The prototypical reader of Martha Stewart Living is a 53-year-old, married, college-educated woman. You don’t need to do a whole lot of research to realize that that is not the typical cannabis industry target demographic.

“Simply put, Martha Stewart’s new cannabis partnership has the potential to open up pot products to a whole new category of consumers. That’s pretty exciting for the whole industry.”

[Ed. note: Canopy is one of three names in the sector Ray classifies right now as “avoid.”

To learn why… to see the other two names to steer clear of… and to discover the under-the-radar cannabis companies he says could deliver epic levels of wealth… you’ll want to check out his up-to-the-minute research at this link. No long video to watch.]

On the cannabis legalization watch, an interesting fight is shaping up in New Hampshire.

Yesterday the state House voted 209-147 in favor of a bill legalizing possession up to one ounce and setting up a commission to license and regulate a recreational cannabis industry. That’s a comfortable margin, but not enough to override a veto promised by Republican Gov. Chris Sununu.

Longer term, the bill’s sponsor, Rep. Renny Cushing (D-Hampton), says, “I’m confident that the force of history is with us.” Already the ‘Live Free or Die’ state is surrounded by states where recreational pot is legal — Vermont to the west, Massachusetts to the south and Maine to the east.

[For whatever it’s worth: Get a load of that vote again. We’re struck by the sheer number of people casting a vote. And a couple dozen others weren’t around or voted “present.”

“each legislator represents about 3,300 residents,”

Hmmm… Inflation is creeping back toward the Federal Reserve’s 2% target.

The Commerce Department is still playing catch-up from the partial government shutdown, but this morning it’s out with the “core PCE” number for December. This is the Fed’s preferred measure of inflation… and after a summer-fall drop, it’s back to 1.9%. 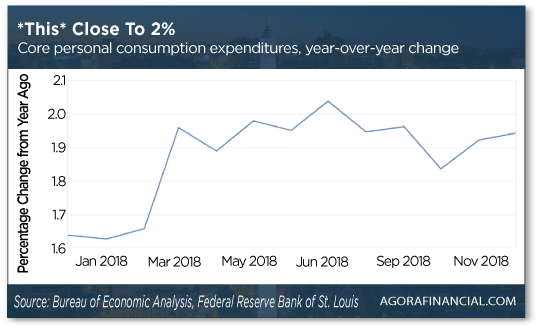 If this keeps up, and if the stock market keeps rising, it’s conceivable the Fed might start chattering again about raising interest rates later this year — an option it decisively took off the table only last month.

Meanwhile, it being the first of the month, the Institute for Supply Management is out with its ISM manufacturing index for February. At 54.2, the number is less than expected and down from January… but it still points to a factory sector that’s growing. (Any number above 50 indicates growth.)

Stocks are rallying on this Friday, but overall it’s still shaping up to be a down week.

After a two-day smackdown, gold is holding onto the $1,300 level barely… but the real excitement in precious metals is a hostile takeover bid.

“Newmont CEO Gary Goldberg isn’t on board. He prefers not to relinquish his control of his company. In fact, he plans to pursue his own acquisition of another miner, Goldcorp (GG).

“As CEO, Goldberg is in charge of managing Newmont’s day-to-day operations. But he’s obviously not the sole owner of the company. It is also owned by the shareholders, who can ultimately choose whether to accept Barrick’s takeover offer or not.”

And that’s where things get interesting.

“You see,” Zach explains, “NEM shareholders have to vote on whether they want to accept Barrick Gold’s offer. It’s possible $17.8 billion won’t be enough, though. The easiest way for Barrick to ensure that enough shareholders get on board is to throw more money at them.

“That’s why I expect Barrick Gold to increase its offer price at least once — if not several times — over the coming weeks and months.

“It’s a classic negotiating tactic. You start with the lowest price you think might be accepted, then work your way up until you have a deal. And as my old economics teacher used to say, there’s always a deal to be made if the price is high enough.”

In the meantime, “It’s an epic battle of corporate egos,” says our resident geologist Byron King of Rickards’ Gold Speculator.

Here’s Barrick CEO Mark Bristow, describing the Newmont-Goldcorp deal and the 17% premium to Goldcorp shareholders for mining assets Bristow says are inferior to Barrick’s: “It strikes me as desperate and bizarre.”

Goldberg has a point. Newmont’s been a far better performer in recent years, although Barrick is under new leadership these days.

Still, make no mistake: Barrick’s offer is unprecedented in the gold mining sector, according to Byron’s contacts at the top of the mining biz.

“It’s the first time I’ve ever seen a hostile [takeover attempt] at a discount to the stock price,” says Pierre Lassonde, chairman of the royalty giant Franco-Nevada (FNV). Barrick is “throwing smoke bombs, left, right and center… to get the Newmont share price to underperform,” Lassonde tells Kitco News.

“I think if we could see more of that happening, you’d see consolidation happening in the industry and the shareholders would be treated better.”

Byron helpfully translates for us: “In the case of most acquisitions, investment bankers and lawyers foster ‘a poker game’ mentality. There’s typically a ‘nominal premium’ for a takeover, perhaps 20% or 30% above some already beaten-down share price.

“Then, according to Rob, the acquiring company loses share price ‘as soon as it makes the bid, so the real premium is much smaller.”

Barrick is just skipping over the whole charade. Far better in his view is — again, Byron’s words here — “to combine companies in a way that works in terms of geology and operations, and then let markets sort out an appropriate value of a combined entity.”

That said, McEwen does not see the industry consolidating into a handful of giants. Once a gold miner reaches a certain size, “The management issues are pretty daunting.”

“In the most New Orleans story ever,” writes a wag at Fark.com, “the Bourbon Street battle between Huge Ass Beers and Giant Ass Beer is headed to court.”

“Huge Ass Beers,” explains the Louisiana newspaper The Advocate, “is the trademarked name for a plus-sized pour of draft beer sold at a trio of related Bourbon Street businesses. With the term printed on their plastic cups and containers, on employees’ T-shirts, doormats and huge signs brandished by street barkers, Bourbon Street is plastered with Huge Ass Beers marketing.” 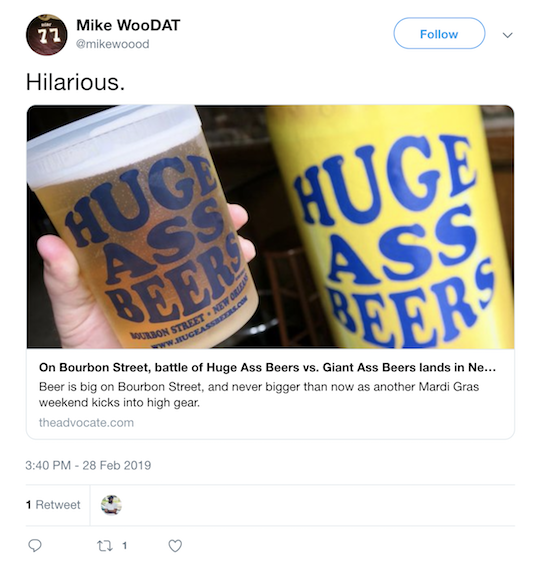 The owner of those establishments filed suit this week against another string of Bourbon Street bars (and a strip joint!) for marketing a rival called Giant Ass Beer.

“In the suit, the Huge Ass Beers creator alleges trademark infringement and seeks a restraining order barring the sale of Giant Ass Beer, as well as damages.”

As of yesterday afternoon, “Giant Ass Beer was nowhere to be seen in at least one of the businesses named in the suit.” And at another, “where 72 draft beer taps line the wall, a bartender had only conventional 16-ounce plastic cups available.”

As it happens, Huge Ass Beers creator Billie Karno is also the landlord for several of the establishments marketing Giant Ass Beer — which, as it turns out, have sued Karno for what they call unfair business practices. Imagine that…

“Look back in history to October 2002,” a reader writes after we noted yesterday that National Security Adviser John Bolton appears to be the one who tanked the Trump-Kim summit with new demands out of the blue.

“In 2002, there was some preliminary intelligence that North Korea had restarted a clandestine nuclear program, which North Korea denied. The Bush administration lacked commitment to the 1994 Agreed Framework. At this point, Undersecretary of State for Arms Control and International Security Affairs John Bolton called that intelligence ‘the hammer I had been looking for to shatter the Agreed Framework.’ And that was that.

“So it’s no surprise that Bolton sabotaged yesterday’s talks. He’s been anti-North Korea forever. I don’t expect any positive action on North Korea until the U.S. gets rid of Bolton.”

The 5: Thank you for that recovered history. We were going to mention it yesterday, but we didn’t have time to properly research it before deadline.

Meanwhile, it turns out exactly one year before the summit and before Bolton took his post last summer, he published an Op-Ed in The Wall Street Journal… 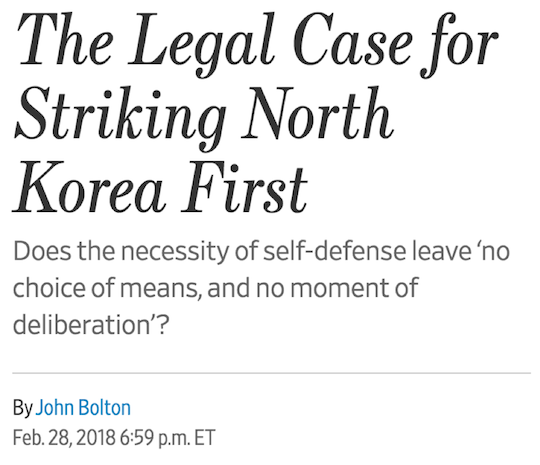 “Dave, I support your rant against big-shot CEOs. I find it fully justified,” a reader writes, “but I do also support the president’s actions.

“If it takes tariffs to correct the errors of the past, so be it. Taxpayers would be well advised to look at the big picture, i.e., without jobs low prices mean bupkis.

“You could turn the rant around: Nobody forces you to buy the China-made stuff, tariffs or not.

But waiting for either CEOs or buyers to cut back voluntarily is but a dream. Go Trump!”

“I hope the rant isn’t over,” says another. “In fact, I hope you’re just getting warmed up.

“I too am sick unto death of big-shot CEOs complaining about the consequences of choices they’ve made. Anything that props up their near-term results and stock options is good to go, regardless of the damage it might inflict three-plus months down the road.

“So what if they harm their customers or violate the rule of law — or both — in the process? Fines and lawsuits are just the cost of doing business profitably. Besides, they’re just one bailout or bail-in away from being flush with cash again (and paying themselves obscene bonuses).

“That’s the problem with socialized corporatism! They can all get bent.”

The 5: Yeah. The problem now is that the left has found its voice in denouncing crony capitalism, but it focuses almost exclusively on the capitalism part and not the cronyism. That’s a topic for another time…

What should you do instead? Answers here.

Rebel Capitalist George Gammon says: “With the Government Put there is already a huge tailwind for gold.” Read More

“There is some highly persuasive scientific research on polling that says Trump will win,” says Jim Rickards Read More

In our yield-starved economy, gold’s turning the heads of professional investors. Read More

“There’s a way to sell your gold and silver, take profits and not pay a dime in taxes,” says our founding editor Addison Wiggin. Read More

By most measures, the dollar is having its worst month in nearly a decade. Gold, meanwhile, is now in record territory… Read More

AT&T issued a mishmash of second-quarter earnings last week… signaling the demise of satellite TV. Is another satellite technology waiting in the wings? Read More

Way back in 2011 we anticipated how a funding crisis in the federal government would cascade down to the state and local levels. Well, we’re here now. Read More

The confrontation between Washington and Beijing is quickly reaching the danger zone — not that you’d know it by reading U.S. corporate media. Read More

If you want to protect your wealth from pandemic pandemonium, the best course of action? Search out anti-bubbles… Read More