There’s a $695 billion pile of money out there, just waiting for you to claim a piece of it.

This money is controlled by some of the world’s smartest and most well-heeled investors. If you knew in advance where they might put that money to work, you could hitch a ride on their success for gains well north of $10,000.

“When we talk about takeover opportunities, we usually think of larger companies buying out rivals,” explains our Zach Scheidt.

Zach keeps a keen eye on takeover targets… buyout bait… companies that are ripe for a big jump in share price when they’re acquired by a bigger company.

“But there’s another category of buyouts that is often just as powerful,” Zach says — “private equity acquisitions.

“The private equity industry is made up of funds that are only available to the most affluent investors in the world. Talented managers take capital from these wealthy investors and put it to work in the markets.

“You’ve probably heard of some of the most famous private equity managers. People like Stephen Schwarzman, who founded The Blackstone Group… David Einhorn from Greenlight Capital… and Howard Marks, who manages Oaktree Capital Management.

“Some of the most successful private equity funds are focused specifically on buyout transactions.

“When a private equity company offers to buy out a business, it’s a little different from when a company buys out a competitor,” Zach goes on.

“Instead of merging two companies together, the company being bought out typically just gets a new management team, along with financial support from the private equity group.

“The hope is that over time, the buyout will grow in value and can eventually be sold to other investors for a profit.”

Here in early 2019, the amount of private equity money earmarked for buyouts has swelled to its highest level in the 21st century. 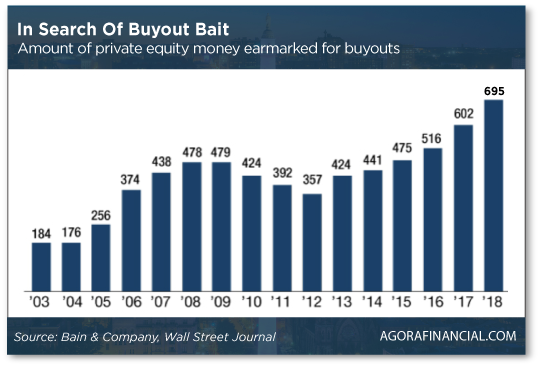 “Private equity firms focused exclusively on buyouts are now sitting on $695 billion in cold, hard cash just waiting to be put to work,” Zach says. “And that stockpile continues to grow month after month!

“Keep in mind, private equity managers charge their wealthy clients fees for buying and selling investments. They also earn a percentage of the investment gains they deliver. So they aren’t making any money by keeping that cash idle on the sidelines.

“That’s a powerful incentive for them to start looking for deals… which is why I expect us to see a surge in announcements over the next few months.”

Late last year, Zach obtained access to a proprietary system that spots takeover targets before they get an offer. This system has a 95.2% accuracy rate.

Only yesterday it delivered a quick 89% gain on a recommendation he made on Feb. 7. That’s right — readers who followed Zach’s guidance nearly doubled their money in 34 days.

Through midnight tomorrow night, you can gain access to these trade recommendations. And we’ll even apply a $557 credit to your account, so you can get started right away.

Find details on this exclusive offer when you click here. Again, time is of the essence: The deal comes off the table at midnight tomorrow.

Traders are donning their rally caps as we approach the midpoint of the week. At last check the Dow was knocking on the door of 25,700.

More significant, the S&P 500 just punched through the 2,800 level. Chart watchers say if that level can hold by week’s end, that’s a bullish sign indeed.

The Brexit drama is throwing currency markets into a blender… and as such the dollar has weakened sharply in the last 24 hours. A weaker dollar translates to stronger gold, and the Midas metal is back above $1,300.

Crude is knocking on the door of $58 a barrel after the weekly inventory numbers from the Energy Department revealed a drawdown in oil inventories.

Among the day’s noteworthy economic numbers: Durable goods orders jumped 0.4% in January — way better than the “expert consensus” of economists polled by Econoday were expecting. And if you back out orders for aircraft and military gear, which fluctuate big-time from month to month, the number is even better: Orders for “core capital goods” jumped 0.8% — which almost makes up for a 0.9% collapse the month before. Heh…

So much for the pullback in biotech.

Biotech shares cratered last week after news that FDA Commissioner Scott Gottlieb is stepping down. As we mentioned at the time, Gottlieb did much to clear away regulatory barriers for biotech… and as a result, new drug approvals set records in 2017 and 2018.

“But the sharp pullback gave way to a new rally this week,” chart hound Greg Guenthner tells us, “lifting shares back above their 200-day moving average and November–December highs.” Greg has highlighted the 200-day and the snapback rally on this chart… 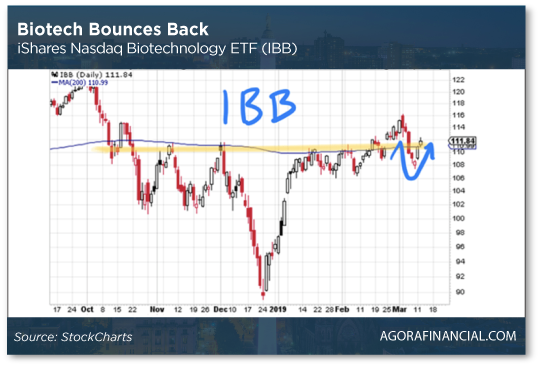 “Funny,” Greg muses, “no one’s uttered a word about Gottlieb now that biotechs are snapping back to life.”

For a few days, Greg’s been hoping that sharp sell-off would shake out the proverbial “weak hands” before biotech could resume the breakout that began last month. He’s not ready to pull the trigger yet, but for now “biotech is out of the danger zone.”

Wait a minute — Washington’s regime-change gambit in Venezuela isn’t about Nicolás Maduro, but rather about “socialism”?

Secretary of State Mike Pompeo gave an odd speech on Monday, hours before he ordered U.S. diplomats to leave the country. “Nicolás Maduro promised Venezuelans a better life in a socialist paradise,” he said. “And he delivered on the socialism part, which has proved time and time again is a recipe for economic ruin.”

No argument here. The 5 has chronicled the follies of Venezuela’s socialist misrule for years under both Maduro and his predecessor Hugo Chávez. (Chávez, however, was more politically savvy and much more entertaining.)

But what happened to all the talk about how Maduro had to go because he’s a “gangster”? And if the real problem is socialism, why not just wait it out until the system collapses under its own weight — as happened in the Soviet bloc three decades ago?

The answer appears in a New York Times story bylined by David Sanger, who channels Washington’s war hawks whether the target is Iran or China or now Venezuela, and Edward Wong. “The United States,” the article laments, “has just about run out of options to achieve its goal in Caracas: a peaceful change of power.”

Because of course, letting the socialist system collapse on its own isn’t good enough for the Trump administration. (Or most Democrats, who cheered on the president’s regime-change rhetoric during the State of the Union.)

Not for lack of trying: At this time we can’t rule out the possibility that Maduro is right when he accuses Washington of engineering the blackouts that have swept the country.

In a memo written way back in 2010, CANVAS founder Srdja Popovic was talking up a collapse of the Venezuelan power grid as “a watershed event” for “galvanizing public unrest.”

“Flash-forward to March 2019 and the scenario outlined by Popovic is playing out almost exactly as he had imagined,” writes Max Blumenthal at the Grayzone Project. “The Venezuelan government has placed the blame squarely on Washington, accusing it of sabotage through a cyberattack on its electrical infrastructure. Key players in the U.S.-directed coup attempt have done little to dispel the accusation.”

Sounds outlandish… but for supporting evidence, we offer the following…

We can only hope Trump’s efforts in Venezuela wreak less havoc than Obama’s in Syria — half a million dead and 11 million refugees, nearly half of whom fled the country.

On the subject of daylight saving time, a reader writes: “Not to beat a dead horse (or a feral pig), but I lived in Arizona and enjoyed not monkeying with clocks twice a year. [Arizona and Hawaii are on year-round standard time.]

“I’ve since moved elsewhere, and the total absurdity of DST is even more self-evident. Stop it. Now.”

The 5: For decades, much of Indiana was on year-round standard time — until 2006 when spineless state lawmakers fell in line with most of the rest of the country.

It provided an excellent case study for the claim DST reduces energy usage, and researchers from Yale and the University of California, Santa Barbara went to work.

Their conclusion: Whatever savings were had from less indoor light during the summer were more than offset by an increase in the use of air conditioning. Electricity use grew 1%. Oops.

“Energy savings may have justified the hassle of resetting clocks in March before air conditioning became widespread,” writes Utah State economist William Shughart, “but cranking up the AC when the sun is at 5 p.m., but your clock’s hands point to 6 p.m. has caused more power being consumed ever since.”

“I live in northern Alberta, Canada. At the end of June it is still daylight at 11 p.m.

I think it starts getting light at about 2 a.m. again. (I haven’t been up that late, or early, in a while.)

“Daylight saving time for us is so ridiculous. I hate it. My wife moved here from Asia recently. She couldn’t understand why we change the time.”

The 5: Yes, DST is mostly a North American and European thing.

Meanwhile, we’re a couple of days late taking note of this…

So wait — does that mean he’s not OK with year-round standard time? Or is this another case of how he should be taken “seriously but not literally”?

P.S. Just to reinforce what we said earlier: We’ve applied a $557 credit to your account. And you can claim it anytime… as long as it’s anytime before midnight tomorrow night.

Follow this link to learn how you can claim this credit.