Volatility’s Not a Four-Letter Word

“You hear a lot these days about volatility,” says penny stock trading whiz Tim Sykes. “But even during uncertain times in the market, someone is making money.”

To Tim’s way of thinking, volatility’s not the four-letter word it is for so many investors. And maybe that’s the difference: Tim would call himself a trader rather than an investor.

For a trader, volatility’s key. “It is simply how fast a stock moves,” Tim says. “The biggest problem I see with investors is actually trading nonvolatile stocks.

“There simply isn’t that much money to be made…

“I actually started my trading career with blue chip stocks,” says Tim. “But these stocks don’t move much.”

If your retirement accounts are chock-a-block with blue chip stocks, you’re well aware of this fact: It’s virtually out of the question to make quick cash from these ponderous stocks.

“That’s why I started trading penny stocks,” Tim says. “And once I started making thousands of dollars in a matter of days, I was hooked!”

And why wouldn’t he be?

Tim says: “Why wait decades to see any big gains if you could make them in a matter of days with penny stocks?

“The beauty of these stocks that trade for less than $5 is that they are really explosive,” he continues.

When combined with Tim’s proprietary penny stock trading system — that he’s shared with thousands of students — you can get a real edge on the markets.

It’s a system so straightforward… it’s all based on something Tim calls a “money line.”

“Simply put, I only buy penny stocks when they cross the money line,” Tim says. “Let me show you what I mean with one of my actual trades.”

Tim did his homework on a small biotech, 22nd Century Group, that offers products for smoking cessation.

Here’s what Tim saw on his computer screen… 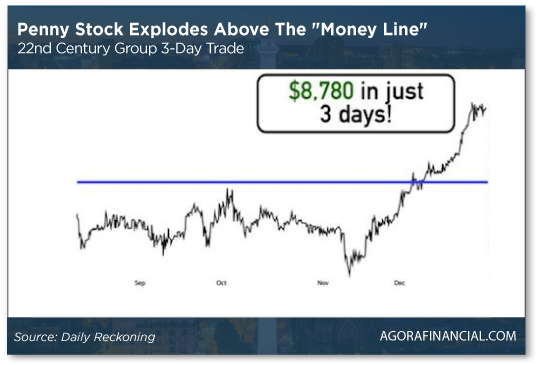 “I was watching the stock for months when it was trading for around $1,” says Tim. “It was trading below the ‘money line.’ And as long as it remained below the line, I would just keep watching.

“One day, the stock finally crossed above the line. And that’s when I got in,” he continues. “Sure enough, the stock exploded.

Then there’s this one-day trade… 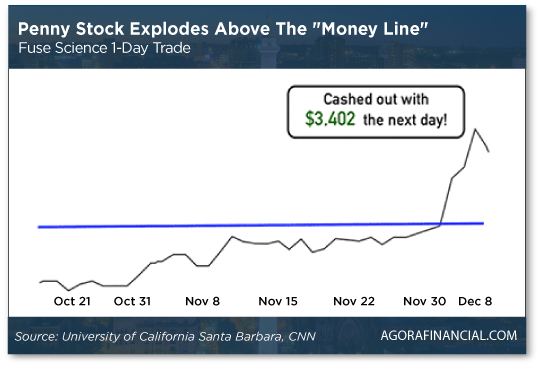 “If you have a small account and want to learn how to grow it exponentially,” says Tim, “you can definitely do it.”

Tim knows anyone who adopts his penny stock strategy can make thousands every week — regardless of what the broader market’s doing.

“I made nearly $5,000 one morning when markets were crashing,” Tim says. “I’ve also helped keep my students safe in dangerous times.”

While Wall Street’s mainstream investment strategy might yield returns of 10% a year — or 20% in a remarkable year — “I’m focused on helping my students generate ridiculous annual returns in the realm of 200%, 500%, even 1,000%,” says Tim.

“And there’s nothing preventing you from making the same kind of money,” says Tim. “Of course, you have to know where the ‘money line’ is and how to use it properly.”

Fortunately, Tim does the heavy lifting for you — he does the homework on the right penny stocks that are set to explode.

To learn more about how the “money line” can make you rich… you must act quickly; this information comes down Sunday at midnight.

How would making that kind of money every week change your retirement, for example?

You might grow your money exponentially using Tim’s proven niche strategy. Most people know nothing about this remarkable strategy. But you can use it to grow wealthy too.

The Chinese stock market surged more than 23% during the first two months of 2019. But investors are still skeptical, especially in light of trade war back-and-forth…

“Could this big rally completely reverse if a trade deal falls through?” asks our income specialist Mike Burnick. “In short, no.

“Trade alone isn’t the only reason why Chinese stocks are performing so well, or even the main reason,” Mike says. “Yes, no deal on trade would take plenty of steam out of the rally, but it wouldn’t end it.”

There’s more to this rally’s story…

“There are trillions of dollars in global wealth tied to this index,” says Mike, “so when MSCI makes a move, index-tracking investors must buy, and buy they did!”

Just in the past month, for example, investors have piled into Xtrackers Harvest CSI China A-shares ETF (ASHR) — to the tune of $523.7 million.

There’ve been five times over the past seven years when Chinese stock have been as cheap as they are now; “after each of those five times,” Mike continues, “China’s stock market surged by an average of 41% within the next year.”

But perhaps most compelling: The increasing weight of Chinese A-shares in the indexes this year will put a floor under the Shanghai market no matter what happens with the trade war or even China’s credit bubble.

With that in mind, “For easiest access to these highflying stocks,” Mike says, “consider the Xtrackers Harvest CSI China A-shares ETF (ASHR).”

The difference being the social media platform had 150 million users in 2008. Now? Monthly users are estimated at 2.3 billion.

Zuckerberg’s brainchild — not known for its transparency — made a statement on Twitter (now that’s funny… heh) saying: “We’re aware that some people are currently having trouble accessing the Facebook family of apps.

“We’re working to resolve the issue as soon as possible.” And with that, Facebook and Instagram were back up Thursday morning. No further explanation. The company did, however, deny the outage was due to a cyberattack.

Apparently, Zero Hedge content violated Facebook’s “Community Standards” — which are sufficiently (purposefully?) vague for the platform to shut down any user or shared content at any time. (For the record, Zero Hedge doesn’t have a Facebook account.)

The ban wouldn’t have anything to do with Zero Hedge’s criticism of the social media giant, would it?

The 5’s take on Zero Hedge — while the website’s good for a chuckle — it sometimes plays fast and loose with the facts. That being said, we still advocate free speech… 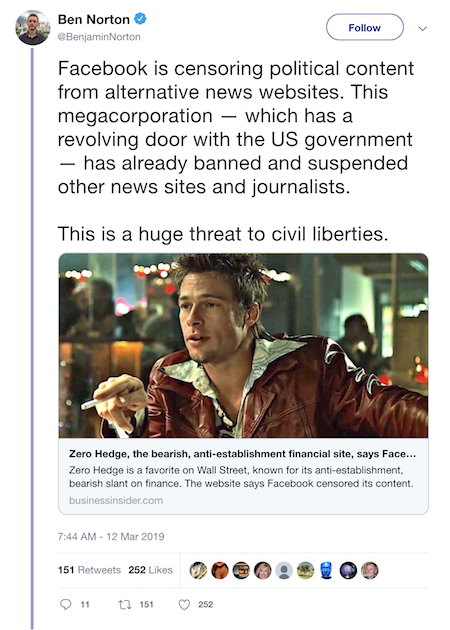 After Facebook re-friended the website Tuesday, Zero Hedge said: “We can and will continue as before, with zero adjustments to our writing style, and we will certainly continue with our highly critical coverage of all things Facebook.

“And best of all,” Zero Hedge says, “it will be read on Facebook, allowing users of the world’s biggest media company to escape an informational echo chamber, and be presented with contrasting opinions….”

The Dow, too, seems to be largely unaffected by the president’s decision yesterday to ground Boeing 737 Max 8 and 9 planes in the U.S.

“By advocating minimum wage hikes, people get to signal their own political virtue,” writes Hans Bader at Liberty Unyielding, “at the expense of other people’s jobs.”

This is a story The 5’s watched unfold for years… 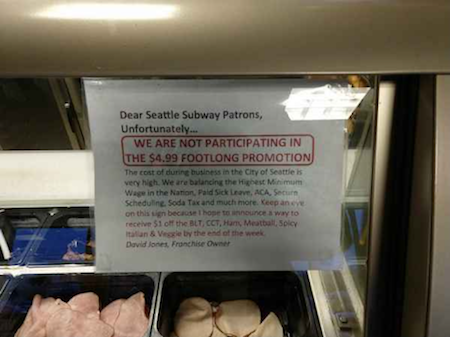 This was posted by the owner of a Seattle Subway restaurant last year; in case you can’t read the fine print, one of the reasons he gives for not being able to afford the Subway sandwich promotion is: “We are balancing the highest minimum wage in the nation.”

Now Illinois and New York have joined the melee. “Illinois recently enacted a $15 minimum wage, a large increase in the minimum wage that will be phased in over several years. And businesses are already announcing plans to close up, move out of the state or curb their expansion in the state.”

As for New York, since the state enacted the same minimum wage hike, “New York City experienced its worst decline in restaurant jobs since 9/11.” And according to a New York City Hospitality Alliance survey, 75% of respondents said they’d be cutting employee hours while 50% said there’d be layoffs.

“The abstract idea of a ‘living wage’ is so powerful that politicians and even voters are willing to sacrifice real people in the pursuit of it.”

Perhaps California’s Jerry Brown said it best when he signed the $15 minimum wage into law: “Economically, minimum wages may not make sense. But [wait for it…] morally, socially and politically they make every sense.”

The good news is that it’s not that complicated if you follow Tim’s rules.

The next step is yours. Click here now to learn more.