“But as its roadshow gets underway,” he says, “demand might not be as high as initially hoped.”

Pinterest (ticker: PINS) is scaling back expectations: “The company is seeking a $9 billion valuation as it looks to sell shares between $15–17.” 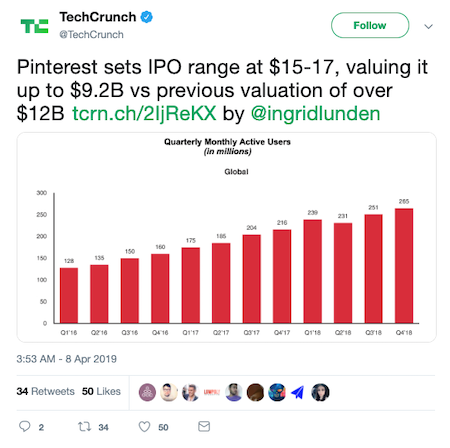 This in contrast to the company’s valuation — $12 billion — two years ago. “You don’t have to be a financial whiz to figure out these numbers are trending in the wrong direction,” Greg says.

“Pinterest’s price range dampens some of the fervor over a wave of tech offerings this year,” The New York Times says, “which had promised to generate piles of new wealth in Silicon Valley.”

“Before Lyft first began mulling over its IPO price,” says our venture capital maven James Altucher, “the company… thought to offer shares to the general public for between $62 and $68 a share.”

Here’s the rub: According to the company’s books, Lyft generated $2.2 billion in revenue in 2018. “But in generating all those sales,” James says, “the company managed to lose more than $911 million!”

“I don’t care if Lyft is ‘laser-focused on revolutionizing transportation’ as the company claims in its S-1 document filed with the Securities and Exchange Commission (SEC),” says James.

Rather, James looks for companies with “wide moats” — a competitive advantage — along with a reasonable expectation the company will turn a profit.

“And aside from a cool app — which Uber also has — and an early-mover advantage in the sharing economy,” James continues, “I don’t see the need or the logic in owning shares of Lyft at its current valuation.”

“How a company and its investment bankers manage the pricing of an IPO can go a long way in determining whether that IPO is successful,” James says.

“While a banker never likes to price an IPO near the low end of a range — because that suggests weak demand for shares — my gut feeling [about Lyft] was anything north of $68 ran the risk of being quickly sold.

So when Lyft offered shares to the general public at $72 per share — “and then preopening demand drove that price into the upper $80 range” — James said a prayer to the investment gods for the retail investors getting fleeced.

“You see,” James says, “when Lyft opened for trading around $87, it made absolutely no sense for anyone with the ability to sell their shares not to do so.”

Aaand… that’s exactly what happened, sending shares off a cliff, well below the official $72 IPO. Shares today are in the upper $60s — a far cry from the IPO-day high of $88.60.

So James is right to question if Lyft’s ruined the IPO landscape for other tech unicorns… and investors.

“While Lyft’s abysmal IPO showing is bound to frustrate late-stage and IPO-day investors,” he says, “tech investors have a bigger problem on their hands.”

Red-letter unicorns Uber, Airbnb, Slack — as well as Pinterest — are all expected to premiere at the NYSE this year. And Lyft’s meh IPO complicates matters… 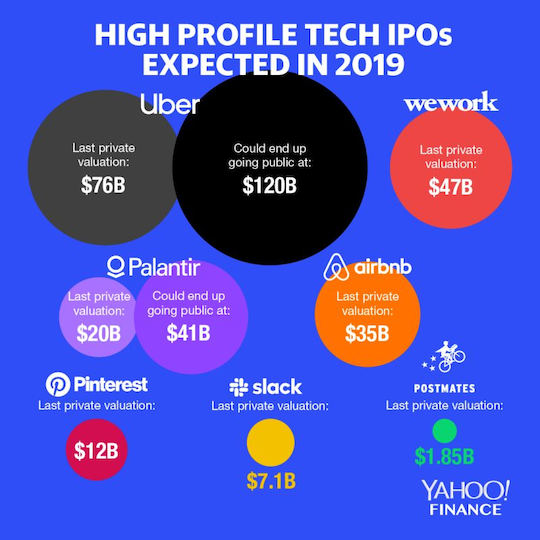 “The fact that Lyft has failed to generate strong demand from investors following its IPO pricing creates a problem for bankers,” James says.

“Remember, investment bankers want to make as much money as possible,” he continues. “Not for you! But for themselves and their clients.

“If a bank dramatically underprices an IPO, the company that’s becoming public can miss out on a massive cash infusion.” And gain a bad reputation for failing to predict the public’s demand for shares.

“In the end,” James says, “it’s better to underprice shares and see them surge higher… than price shares too high only to see them careen off a cliff.”

[Ed. note: Former hedge fund manager James Altucher is on a mission to tear down the barrier between Wall Street and Main Street…

If you haven’t saved enough for retirement…

If you have money worries…

Or if you just want to generate some extra cash…

You could make $3,000 in extra income each month… without any hard work.

Check it out: This MASTERCLASS is perfect for you.]

The official government CPI numbers show that prices rose by 1.9% year over year through March.

However, if we use the old Federal Reserve methodology (as ShadowStats does), the rate of inflation increases to 9.6%.

Think ShadowStats overstates the case for inflation? More like the Fed continues to bury its head (in the sand… or wherever) when it comes to inflationary pressures.

Commodities are also in the green: A barrel of WTI is going for $64.51. As for gold…

Six weeks ago, gold scrambled to year-to-date highs, closing in on $1,350 per ounce. And we do mean scrambled.

“The resilient gold trade is perking up again this week, jumping back above $1,300 after finding support near its March lows,” says Greg.

He’s counting on gold’s giant base — raised from the ashes of bearish lows in 2015 — to provide support for a bounce. Greg says: “A five-month rally is setting the Midas metal up for what could be its most important breakout in more than a decade.”

“If you’re looking for more income,” says our wealth and income specialist Zach Scheidt, “I suggest turning to America’s casinos.”

No, Zach’s not suggesting you try your luck in Vegas — remember, the house always wins.

Instead, he says: “Our nation’s gambling palaces can really be a great source of cash… In fact, I know a strategy you can use that practically guarantees regular, reliable payouts.”

Though final numbers for 2018 aren’t in yet, in 2017, casinos cleaned up to the tune of $40 billion — the highest revenue for a single year.

And “it all starts with the buildings [casinos] use,” says Zach. “The property needs to scream luxury and excitement.”

To take advantage of their property’s skyrocketing equity, more casinos are selling their facilities to real estate investment trusts (REITs).

Zach continues: “REITs allow people to buy a stake in a portfolio of real estate assets. Most of the money the REIT earns by renting or selling that real estate is then sent back to shareholders as dividends.

“By law, a REIT must pay out at least 90% of its taxable income each year — making them among the highest-yield investments you can buy on the stock market.

And there’s a new trend happening in the industry: Casinos are selling their properties to REITs for a fresh injection of cash. The casino then turns around and rents the property back from the REIT in a structured deal wherein the casino assumes the cost of any repairs, taxes and insurance.

“For the most part,” says Zach, “all the REIT does is collect rent checks and look for new casinos to do business with.”

“Throw in the wealth effect driving more people to seek the kind of unforgettable experiences these REITs’ properties can provide and you might find yourself proudly telling friends and relatives how much money you’re bringing in thanks to casinos!” 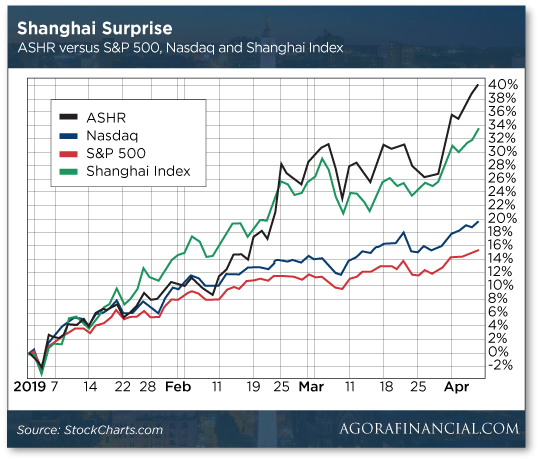 Compare ASHR with other major indexes:

Might seem counterintuitive — ahem… trade war — but “Chinese stocks are on fire in 2019,” Mike says. “Why?

“There are trillions of dollars in global wealth tied to this index, so when MSCI makes a move, index-tracking investors must buy,” says Mike, “and buy they did!

“The best news is this could only be the tip of the iceberg for Chinese stocks.”

And watch out when a trade deal is struck…

Ms. Smith went to local joint Blaze Pizza for a pie last Saturday… and walked out with the restaurant’s flame logo tattooed on her ankle.

In a truly inspired marketing stunt, Des Moines’ own Blaze Pizza invited guests to get a tattoo of the company’s brand for $40. (Tattooists were standing at the ready in the parking lot, guns in hand. Tattoo guns.) 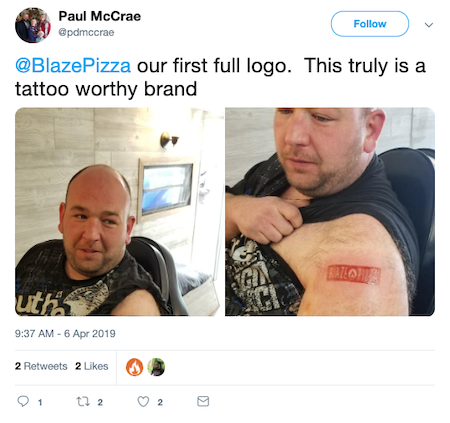 “Tattoo-worthy”? If you say so…

In return for the body branding, a $40 flame tattoo gets customers 24 free pizzas. Got a hankering for more extra-cheesy goodness? A full-on store logo tattoo for $65 comes with 48 free pizzas.

As for Ms. Smith, she said: “If it was Domino’s or Pizza Hut, I probably wouldn’t do it.”

Because — of course — Blaze’s pizza is artisanal, made by bearded, beanied craftsmen, right?

As much as we hate to disabuse Ms. Smith of Blaze Pizza’s hipster cred — the company’s website says: “Franchises available.”

Franchise? A… chain restaurant? Say it ain’t so!

And chain or not, Domino’s hands-down had the better deal: up to 100 free pizzas per year for a century.

P.S. James reveals what he calls the “2-Minute Retirement Rescue”…

A simple retirement “catch-up” plan any American can use.

And you don’t need any experience, expertise or financial knowledge to get started.

If you have two minutes to spare…

James has hit upon a technique to pocket instant cash. Click here and see for yourself.