“Are Meat Substitutes Meat?” reads a headline at Pacific Standard.

That’s a hard no from us. We think the word “substitutes” cracks that particular code, Copernicus.

But once again — as in the case of cauliflower rice — lawmakers are flexing on Americans, making it clear: *condescending tone* Father knows best.

Pacific Standard says: “Citing protections for the beef industry and consumers, a wave of new laws require that food products claiming to be ‘meat’ come from an animal carcass.”

In March, North Dakota fell in step with Missouri, Montana and South Dakota — restricting the word “meat” from food labels of plant-based products. “North Dakota’s bill imposes a penalty for companies that misrepresent their products as ‘meat’….”

The U.S. Cattlemen’s Association has taken it a step further, asking “federal regulators last year to reserve the terms ‘beef’ and ‘meat’ for products derived only from slaughtered animals.” 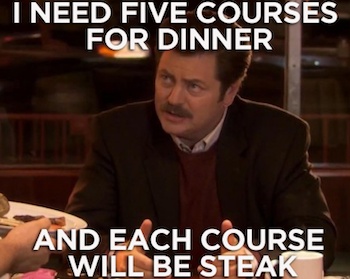 Because… “Meat is meat,” says Mike Deering, executive vice president of the Missouri Cattlemen’s Association. He’s got a way with words… heh.

Federal regulations, of course, would override states; as of yet, no decision’s forthcoming. Regarding use of the word “meat,” in Montana at least, the ACLU argues a bill banning the word violates First Amendment rights.

Which brings us to an IPO that made its market debut yesterday: “Beyond Meat, a purveyor of faux-meat products that claim to be ‘the future of protein,’” says our penny stock maven Tim Sykes.

We know you’re curious: The “faux-meat” in question is soy- and gluten-free and made from peas and fava beans. (We’ll spare you the Chianti reference… ) 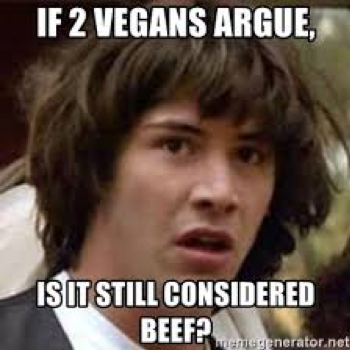 Tim says: “With mounting interest in vegetarian and vegan lifestyles, the company’s products hit it big in the mass market in a relatively short period of time and can be found in retailers and restaurants worldwide.”

Here’s the thing: “Can Beyond Meat bring home the bacon,” Tim asks, “or is it just a flash in the [frying] pan? (Heh… Why resist?)

“The company is growing,” Tim notes. “Beyond Meat products have been adopted by more and more retailers and markets since the company’s founding in 2009.

“While their first big customer was Whole Foods,” he says. “Now you can find them in all sorts of mass retailers and restaurants. Case in point: TGI Fridays now offers a branded Beyond Meat cheeseburger.” 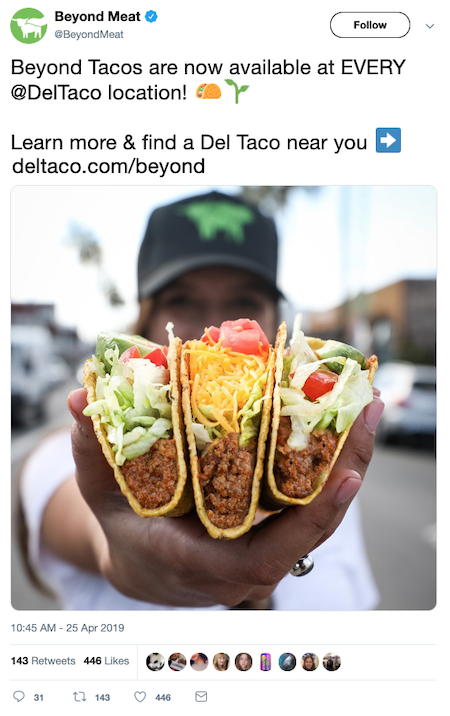 And as of April 15, Del Taco’s getting in on the beefy substitute’s chuck wagon… along with Carl’s Jr. and a slew of other restaurants, hotels, stadiums, amusement parks and more.

“OK,” Tim cedes, “so it sure seems like Beyond Meat has a lot going for it. But this is key… The company is not currently profitable.

“Beyond Meat’s revenue has grown in recent years,” he says. “But it still hasn’t turned a profit. And its losses aren’t improving much.

“While an IPO might drum up capital to help Beyond Meat rake in some profits,” Tim says, “I like to see cold, hard evidence, and this company doesn’t have a profitable track record … yet.”

So is Beyond Meat worth your hard-earned cheddar? (Don’t fight it… )

“Some traders will rush to buy Beyond Meat stock the moment the market opens its IPO,” Tim says.

That’s precisely what happened yesterday when Beyond Meat (BYND) started trading on the Nasdaq exchange a little after noon. Even though the company had priced IPO shares at $25, the opening trade came it at $46. And hastily bounced from there — by the close of trading yesterday, shares were up 163%.

But the thing about IPOs is “the lack of history makes it very hard to make calculated decisions about how the stock price might perform,” Tim says.

“Sure, it’s possible that the stock will leap to incredible new highs within minutes of the market open.” (Check.) “But then again, it could spike up briefly and then start a downward descent that just won’t let up.”

Lyft, anyone? Down almost 19% since IPO.

Tim’s takeaway: “Beyond Meat is a cool company that seems poised for growth. But my suggestion is to proceed with caution.”

As for the company’s “cool” factor, we failed to mention The Wolf of Wall Street himself (no, not Jordan Belfort) — Leonardo DiCaprio — is an early investor. Not that that’s a reason to invest…

“With any IPO,” Tim says, “it’s generally smarter to wait a little bit before jumping in. That can give you a better opportunity to get a read on the stock’s direction.

“Amateurs rush in,” Tim says. “Separate yourself from the novices by waiting for some chart action. If it’s a worthwhile stock, you’ll have your chance to get in on the trade.”

He’s mentored hundreds of students and — along the way — developed a proven strategy for drawing money out of the penny stock market…while staying away from Wall Street’s BS.

Get the details about his groundbreaking system right here… before it goes offline Sunday.]

“What’s going on with gold?” says Agora analyst Greg Guenthner. “Gold was perking up again, jumping back above $1,300 after finding support near its March lows.

“Last month,” Greg says, “it looked as if a five-month rally was setting the Midas metal up for its most important breakout in more than a decade.”

That includes gold-related investments, too: “The VanEck Vectors Gold Miners ETF (NYSE: GDX) was bouncing off its March lows,” says Greg, “confirming a major change in character in GDX compared with last fall when the miners found new lows as gold stabilized in the $1,200 range.”

Unfortunately for gold bugs, the prices of gold and mining stocks haven’t been able to claw back up to the $1,300 level. No traction’s the name of the game — particularly this week when gold’s price sunk to new lows for the year near $1,270 per ounce. 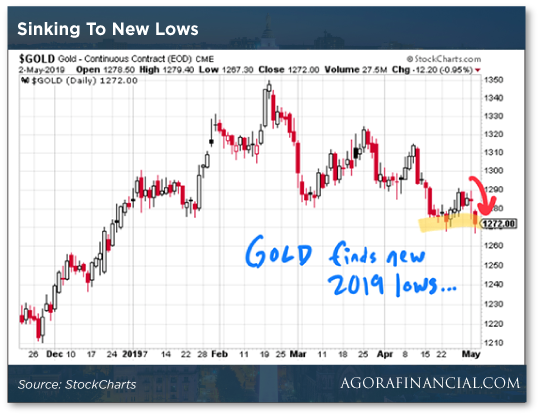 “An ugly trading week for the miners has also pushed GDX back below its 200-day moving average for the first time since January.”

The Labor Department released the official U-3 unemployment rate of 3.6% — the lowest figure of the post-2008 expansion…

Might be because BLS wonks waved a magic wand, conjuring up 263,000 new jobs — way more than expected.

What’s not included in the official calculations is 490,000 people left the labor force — uh, did they all retire with a full pension and a gold watch?

More nuggets from the April data:

Meanwhile, ShadowStats pegs the unemployment rate at 21.2% — same as the last two months — the best since September 2009.

Nearly a year ago The 5 cited figures from Bloomberg columnist Stephen Mihm. He studied the 10 recessions since 1950 and found — on average — a recession sets in four months after the unemployment rate hits bottom. (It’s never more than 10 months.) 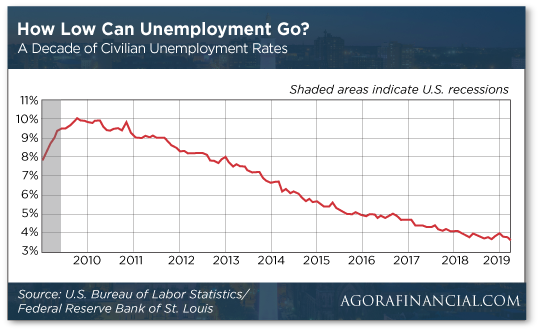 “There’s a ton of demand and subsequently a lot of opportunity in the gaming space,” say our tech expert Ray Blanco. It was a “$137 billion industry in 2018,” he says.

“Since 2012 the industry has grown significantly year over year. Projections for the industry this year are topping $151 billion. It’s an industry with incredible growth. 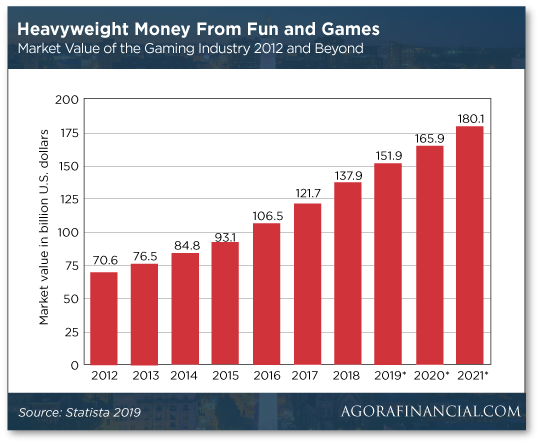 “Gaming opportunities can be broken down into three subsectors,” Ray says.

First, there’s mobile gaming; essentially, these are games made for mobile devices like smartphones. A big name in this space is Google Play.

Last, the console market — think PS4 and Xbox — “topped $38 billion in 2018, according to GamesIndustry.biz.

“The largest sector by far however is mobile gaming,” Ray says, “which accounts for 47% of all gaming revenue and topped a whopping $63 billion in revenue.”

And — in terms of investment opportunity — the champ of mobile gaming? Tencent Holdings (OTCBB: TCEHY).

“Mobile gamers are fully aware of the vast footprint Tencent is garnering,” Ray continues. “They produce some of the most popular mobile games around.”

Late last year, however, Tencent suffered from oppressive regulations handed down by the Chinese government. In a move that smacked of outright censorship, the government put a freeze on approval of any new Tencent games.

As a result, shares plummeted in November to all-time lows; since then, shares have rallied 52%. And that rally’s about to get even more momentum…

Ray believes that’ll be a “great new catalyst that could power Tencent stock to new highs.”

His takeaway? “This could open up a huge new market for Tencent. One that could pay off big-time now and in the long run for the company and its stakeholders.”

“As follow-on to my comment published yesterday,” says a longtime reader, “what if China doesn’t blink?

“If it comes down to kissing the China trade deal goodbye to isolate Iran or relenting on the Iran oil sanctions to sign a deal with China, which way does Trump go? With the oil sanctions going into effect today, we may not have long to wait to find out.

“My guess is that a failure to sign a deal with China would pop the stock market bubble, which he seems desperate to avoid, while backing down on Iran would infuriate a lot of the neocons who, for the moment, support him.

“Personally, I think Trump’s between a rock and a hard place, but perhaps he has some way to finesse it. Could get interesting!”

The 5: Y’know, this might be a good weekend to watch the movie Wag the Dog… It’s free on Amazon Prime Video now.

P.S. We hope you’re seeing this in time.

That’s why we’re urging you to drop what you’re doing and watch this BRIEF CLIP while you still can.

This could affect your week… as early as when markets open Tuesday morning.

** Due to the private nature of the content, this message will be removed from the web just 48 HOURS from now **