A Massive Threat To the Markets (NOT Trade)

There’s a reason this e-letter downplayed the incessant chatter about “progress in U.S.-China trade talks” these last few weeks — in contrast to the mainstream drumbeat.

We just didn’t buy it. And the president affirmed our skepticism in spades yesterday.

In the midst of incessant tweeting about the outcome of the Kentucky Derby — dude, we don’t care about your horse-racing opinions any more than we cared about Obama’s NCAA brackets — he let this drop… 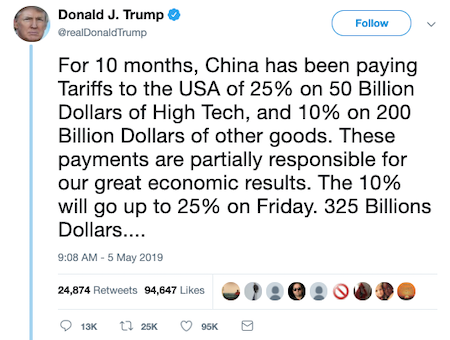 And while we weren’t especially surprised, global traders were. The Chinese stock market tumbled 5.5% today. The contagion spread steadily westward, the Euro Stoxx 50 index slipping 1% and the Dow shedding 450 points on the open, more than 1.5%.

More about the market reaction later. Today, however, we put our main focus on a threat to the markets that — at least compared with trade tensions — no one is talking about.

Buried in a financial trade journal two weeks ago was a chilling omen for the next financial crisis.

We started warning you late last year about the gargantuan amounts of debt racked up by corporate America in the decade after the 2008 crisis. Since 2010, U.S. companies have been growing their debts twice as fast as their profits have been growing.

Which might have been OK when interest rates were next to nothing… but now interest rates are, if not exactly “normal,” at least closer to normal than they were three or four years ago.

Result: Only about a third of the corporate debt out there can be described as “quality.” Another third is rated BBB — investment grade, yes, but really only one notch above junk. And the final third is, in fact, junk.

Unlike during the housing/credit crisis of 2007–08… central bankers and lawmakers actually do recognize there’s a problem.

But only now, in these last two weeks, are they becoming aware of the scope… and like a fast-growing brushfire, the problem might already have spread beyond their control.

That’s because Wall Street is now doing with corporate debt the same thing it was doing with mortgage debt back around 2004–06.

Remember what Wall Street did with poor-quality, high-risk mortgages? They’d bundle up a bunch of them into allegedly “investment-grade” securities. Then they’d palm those securities off onto unsuspecting pension funds, insurance companies and other institutional investors. Then they’d brag over email to their colleagues about the “s***ty deal” they just made. (That was at Goldman Sachs, as we learned during congressional hearings in 2010.)

Those were synthetic CDOs. If you want a slightly more in-depth and more entertaining explanation, the actress Margot Robbie delivered it from a bubble bath in the movie adaptation of Michael Lewis’ book The Big Short… 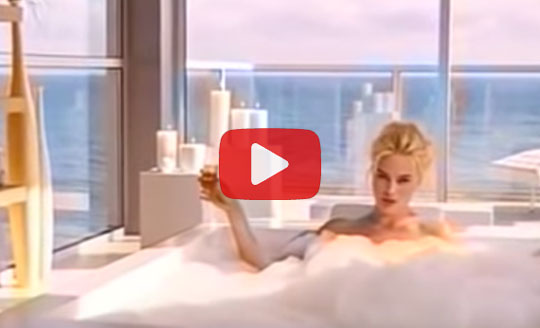 When CDOs started blowing up in 2007, they set off a domino reaction throughout the financial system… leading ultimately to a market panic and taxpayer bailouts in the fall of 2008.

Now the same “s***ty deals” are going down with corporate debt, according to an article in International Financing Review.

“Trading volumes in synthetic collateralized debt obligations linked to credit indexes are up 40% this year, according to JP Morgan, after topping US$200 billion in 2018 on the back of three years of double-digit growth. Meanwhile, analysts predict more than US$100 billion in sales of bespoke synthetic CDOs in 2019 following an estimated US$80 billion of issuance last year.”

The article identifies Citigroup as a major player in these CDOs. You know, the same Citigroup that got a $45 billion bailout in 2008, plus $2.5 trillion in low-interest loans from the Federal Reserve.

“It’s almost beyond belief that the very same people that claimed to be expert risk managers, who almost blew up the world in 2008, are back with the very same products,” says Dennis Kelleher to the Financial Times.

Mr. Kelleher runs a nonprofit advocacy group called Better Markets. He doesn’t buy the conventional wisdom that shrugs off the risk from these CDOs backed by corporate debt. Corporate debt circa 2019 is not necessarily safer than mortgage debt circa 2005.

Again, two-thirds of corporate debt is either junk or *this* close to becoming junk — not unlike a mortgage borrower who took out a “NINJA” loan back in the day (no income, no job, no assets).

But for now, just as mortgage lenders were furiously writing loans to “anyone with a pulse” back in 2005… U.S. corporations are still taking on debt.

According to JPMorgan, U.S. buybacks will total $850 billion this year — breaking last year’s record. The only saving grace is that debt will finance about 14% of 2019’s buybacks… Two years ago, debt financed a third of the buybacks.

Perhaps traders, with a moment to think on it, are invoking Knuckman’s law — as suggested by our man in the Chicago options trading pits, Alan Knuckman. Basically, Alan says wait at least 48 hours before reacting to anything Trump says. Makes sense.

On the other hand, as we said off the top, we never did buy into the trade-deal-is-almost-done talk.

Conventional wisdom says the president needs a done deal that he can brag about on the campaign trail. Nonsense. The president has discovered he can score political points by bashing China. Hell, it wouldn’t surprise us if he did get a deal done this spring… and then turn around next year and accuse Beijing of not following through, if that’s what he thought would secure victory in a swing state like Michigan or Wisconsin.

And if the stock market tanks as a result? Well, he can return to the line he trotted out a year ago during a speech in suburban Detroit: “The stock market could have been up 60%, but I have to do things. I can’t let other countries take advantage of us. The country is doing much better than the stock market.”

Oil traders are yawning at the news Washington has dispatched an aircraft carrier to the Persian Gulf. A barrel of West Texas Intermediate is down a 24 cents, to $61.70.

Usually crude prices react big to any sort of “geopolitical tension.” National Security Adviser John Bolton said yesterday the deployment of the USS Abraham Lincoln aims to send a “clear and unmistakable message” to Iran after what he called “a number of troubling and escalatory indications and warnings” — none of which he would specify for us rubes.

Hmmm… The president Bolton chose to serve campaigned on a platform of no more stupid overseas wars. This administration has yet to undertake a PR campaign warming up the American people for a stupid overseas war. There’s been no effort painting an Iranian leader as “the next Hitler” comparable to the PR campaign against Saddam Hussein in 2002, an effort Bolton had a hand in.

Then again, such a campaign wouldn’t be necessary in the event of a bogus Gulf of Tonkin-type provocation…

Among the market moves that make zero sense today — Kraft Heinz, up half a percent after promising to “restate financial reports for over a two-year period to fix errors that resulted from lapses in procurement practices by some of its employees,” according to the Reuters newswire. Say what?

We got some hint of this over the weekend during Berkshire Hathaway’s annual meeting in Omaha. Berkshire is KHC’s biggest investor. Warren Buffett told his crowd of admirers that an auditor hasn’t approved KHC’s financials. Or as he put it delicately, “There’s something going on.”

Another lowlight from this year’s Berkshire shindig: “Between bites of peanut brittle,” according to a Bloomberg account, Buffett’s right-hand man Charlie Munger “said the company made a big mistake not investing in Google.”

Remarkably, BRK’s performance has trailed that of an S&P 500 index fund during the market’s epic decade-long rally. Then again, Buffett said years ago that BRK has become so huge it can no longer take stakes in tiny up-and-coming companies and stay under the radar — which is one of the ways Berkshire got so big in the first place.

Our daily quest for financial “quirk” is coming up dry today… although we see Las Vegas city fathers have approved “marijuana social-use lounges,” according to the Las Vegas Sun.

The funniest take comes from the person who submitted the story at Fark.com: “For the first time, Las Vegas approves marijuana lounges, finally finding the perfect setting where Keno actually seems like it’s moving along at a quick pace.”

“What’s going on with gold?” writes one of our regulars, as the Midas metal stagnates at $1,280 an ounce today.

“Just a working hypothesis — please don’t hold me to this, as there is no supporting evidence — but it continues to be anathema to the fiat currencies that are being foisted upon us by central banksters.

“It’s funny how it works. Whenever the dollar price of gold threatens to break through an important level of technical resistance, it seems to get smacked down by some shady action in the paper/futures market. In other words, it’s a week like any other week.”

The 5: We might have more to say about precious metals manipulation in the coming week.

We also heard over the weekend from a reader who says he’s versed in technical analysis, wasn’t surprised by the latest pullback and is waiting for a “double bottom” — that is, another visit to the $1,050 level, as happened at the end of 2015. At that point he’ll be all in: “Gold will be hated and that’s the true sign we look for, right?”

The long-term macro trends are still in place. Here’s Johns Hopkins economist Steve Hanke — the fellow we cite from time to time with his Troubled Currencies Project — seeing the same things we’ve been seeing for a while… 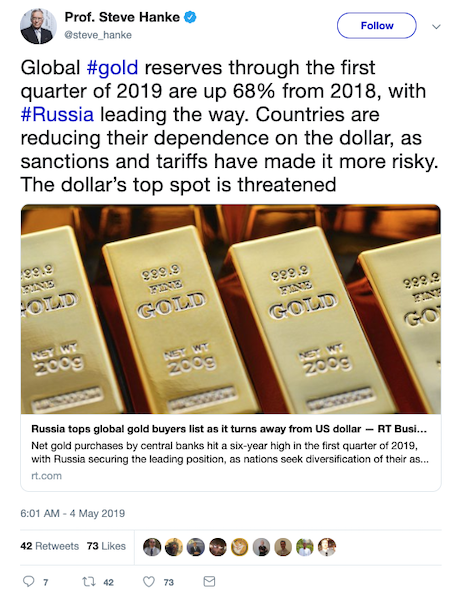 Heh… He linked to a story from the website of RT, the Russian state-owned TV channel. Which got us thinking…

Back in 2014, when ISIS had taken over large swaths of Iraq and Syria and resembled a functioning nation-state… there were reports that ISIS wanted to introduce gold and silver coins based on the specifications of those used during the first Islamic caliphate in the year 634. “What better way,” we groused, ”for Western authorities to discredit gold. ‘Terrorist coinage!’”

Given Russia’s relentless gold accumulation of recent years… and its wholesale dumping of U.S. Treasuries… and the unremitting hostility toward Russia of the national security establishment in this country… we’re half-expecting, sometime, a demonization of gold as something only traitors would possess. Just sayin’…

“Ham is ham!” a reader writes after our latest chronicle of food-label regulatory folly.

“I hope they are going to ban hamburgers made of beef! They should only be made of ham.

“By the way, will the new regulations make it illegal to say ‘Contains no meat’ on the label, if they can’t use the word ‘meat’?”

P.S. Speaking of the aforementioned Alan Knuckman… For a limited time he’s offering one free year of access to his top-performing research.

This offer is open only until midnight tonight — and it might close sooner if the available spots are filled up.