Those damn millennial snowflakes — they’re not doing their part to keep the economy growing.

Or so we’d conclude after reading an essay by one Samuel Staley, whose title is “director of the DeVoe L. Moore Center, College of Social Sciences and Public Policy”…

[Your editor pauses to take a breath.]

Every couple of years we get a kick out of starting an intergenerational food fight among The 5’s readership. That’s not really our objective today, but we figured it was the best way to draw your attention to a crucial topic that rarely gets mainstream attention.

“America seems to be losing its entrepreneurial verve, and millennials may be at least partly to blame,” professor Staley writes.

The country needs a constant influx of new businesses to keep its economic vitality and generate new jobs. From time to time we point out research from the Kauffman Foundation that concludes, “Without startups, net job creation for the American economy would be negative in all but a handful of years” since 1980.

Unfortunately, the number of new businesses has been declining steadily the whole time. 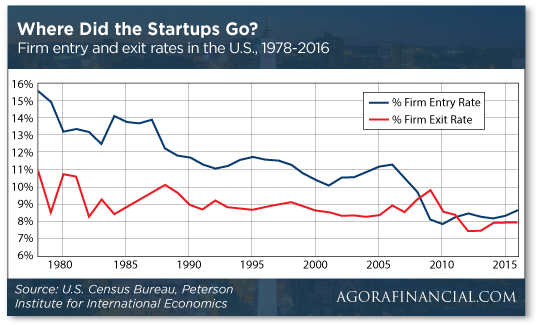 For a while during the “Great Recession,” more firms were going defunct than coming into existence. And while that’s no longer the case, the gap between the two lines on that chart is still alarmingly small…

So how do the millennials figure into this decline?

Back to professor Staley, writing for Fox Business’ website: “Using data from the U.S. Census, Kauffman Foundation research reveals that 20–34-year-olds start businesses at lower rates than older cohorts did in 1996 and haven’t appeared to catch the entrepreneurial bug as other generations did. In fact, their startup rates have declined.

OK, so why aren’t millennials pulling their entrepreneurial weight relative to the generations that came before?

One answer is probably obvious to you, and Staley affirms your suspicion: “Millennials face major financial constraints. According to the Institute for College Access and Success, two-thirds graduate with college debt averaging nearly $30,000 per year. Not surprisingly, their need for a steady income outweighs the risk of starting up a new venture, whatever the satisfaction.”

That’s big of him to admit, given he makes his living in academia — heh…

Professor Staley is right as far as he goes… but he doesn’t go nearly far enough.

In the first place, launching a new business in the United States is wicked hard compared with dozens of other countries around the world.

Each fall, the World Bank puts out its Ease of Doing Business survey. We pay close attention to the part of the survey about how easy it is to start a business in each of the world’s 195 countries.

In the most recent survey, the United States doesn’t even crack the top 50. Herewith, the top 10 along with some other noteworthy nations that rank higher than the “land of the free”… 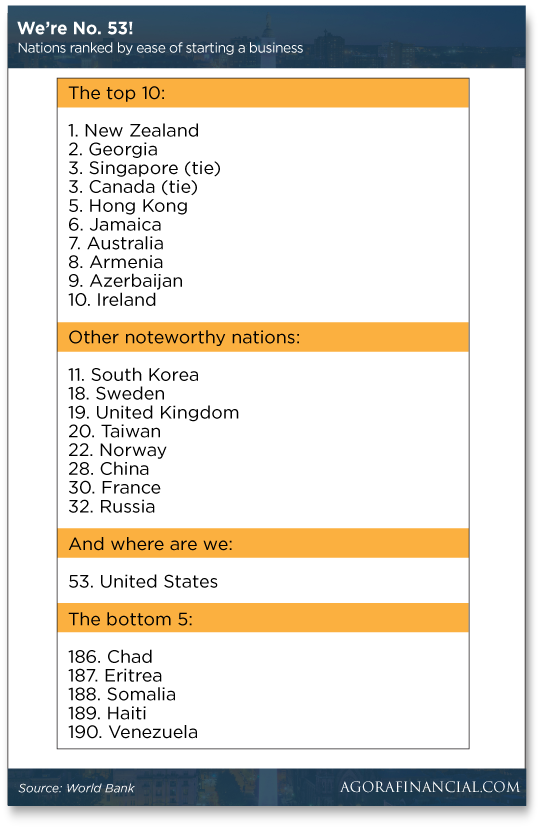 Man, that’s depressing. Three former Soviet republics are in the top 10. France — France! — ranks higher than America. Even China and Russia are more hospitable places to launch a business.

We identified them in this space three years ago — health insurance and the self-employment tax.

Sure, millennials can stay on their parents’ health plan till age 26 under Obamacare, but then what?

Even before Obamacare, buying health insurance was an expensive nightmare if you weren’t a W2 employee. And while we found a study from Brookings that claimed Obamacare lowered the average premium in the individual market when the “exchanges” came online in 2014… even that study conceded that by 2016, premiums were already back to pre-2014 levels.

The self-employment tax, meanwhile, rose relentlessly during the 1980s. Since 1990, it’s been 15.3% — and an obvious drag on entrepreneurship. Anyone who’s working for the man and wants to strike out on their own is suddenly responsible for the 7.65% “employer portion” of Social Security and Medicare… and has to generate another 7.65% of income the first year just to stay even! (Yeah, it’s deductible from your income taxes. Big whoop.)

So we won’t be too hard on the millennials if they’re taking a pass on launching their own businesses. Under the circumstances, can you really blame them?

We’ll restate our position from 2016. If you solve the twin problems of sky-high health insurance and self-employment taxes… you solve the problem of innovation, startups and new jobs. You open the way to an era of unprecedented wealth creation and improved standards of living.

Yes, the tax cuts and deregulation under Trump have undoubtedly helped. But that’s tinkering at the margins if the end goal is a thriving ecosystem of new businesses and the new jobs that come with them.

No, we’re not holding out much hope that Washington will address either problem. We’re stuck with legions of overeducated millennials stuck driving Ubers, just trying to scrape by.

Hey, at least they’ve moved out of Mom’s basement. Well, until the next recession rolls around.

To the markets — which, judging by this screengrab from CNBC’s website, are in deep, deep trouble… 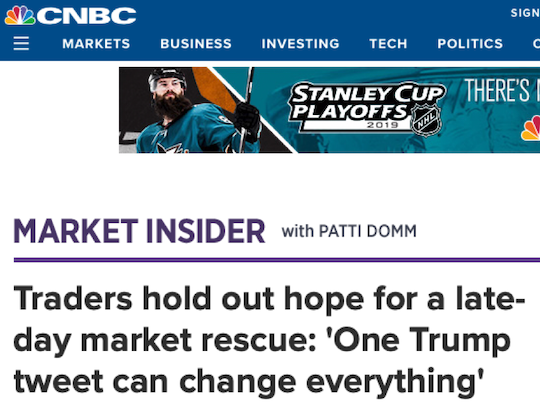 … well, we’re not really sure what he accused them of: “They broke the deal. They can’t do that, so they’ll be paying.”

Whatever. Absent a deal, existing 10% tariffs on Chinese goods jump to 25% tomorrow.

Meanwhile, for all the sturm and drang, the Dow and the S&P 500 are only about 2.5% below their most recent highs a few days ago (a record, in the case of the S&P).

➢ Emendation: We misspoke when we characterized the Iranian government’s plans to stockpile enriched uranium as a “breach” of the Iran nuclear deal. Turns out Tehran is allowed to do that if any party to the deal withdraws — which Washington did a year ago.

Speaking of uranium, let’s circle back as promised to an unexpectedly hot topic among our readership — America’s uranium imports.

We step back from the “should and shouldn’t” of government policy now and turn to an expert uniquely qualified to address the topic — our own Byron King. He’s our resident geologist, so he knows a thing or two about mining the stuff. He also was a Navy flight officer, serving aboard nuclear-powered aircraft carriers.

Reminder: The United States relies on uranium for about 20% of its electricity. And the Navy relies on uranium to fuel all of its carriers and submarines. Meanwhile, all but 1% of U.S. uranium supply is imported.

That’s not a new thing, either, Byron points out. “In the early days of the Cold War, from the 1940s through the 1970s, the U.S. was self-sufficient in uranium. The former Atomic Energy Commission actually set a rather high price for uranium, which made it economic to explore for the substance and then mine and process it.

“By the early 1980s, many U.S.-based uranium operations shut down as the geological resources played out and also as U.S. environmental laws from the 1970s kicked in.”

Today, about 55% of U.S. uranium supply comes from Canada and Australia. Another 35% comes from Russia and other former Soviet states.

Meanwhile, “the U.S. uranium exploration and mining industry is a wreck,” says Byron. “The domestic industry is truly a ghost of its former being.”

The number of people engaged in domestic uranium exploration and mining could fit into a movie theater. 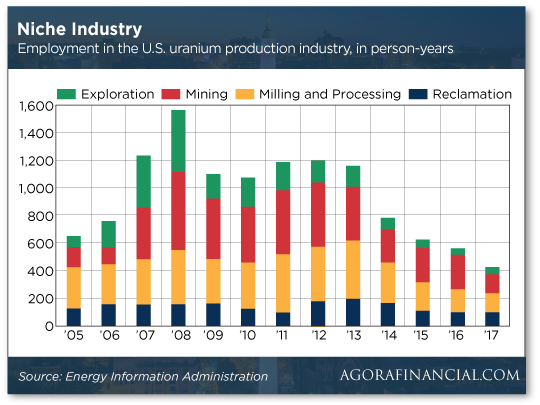 Many of those people are getting on in years, and few people are coming up to replace them.

Some — uhhh — questionable government policy helped to bring this situation about.

“In 2010,” says Byron, “when Hillary Clinton was U.S. secretary of state, her office signed off on the sale of a company called Uranium One (U-1) to Russia’s state-owned Rosatom. U-1 owned — and still owns — the Willow Creek uranium deposit in Wyoming. It’s a major play, under current circumstances for U.S. uranium mining.

“This is where we get the oft-repeated political allegation that ‘Hillary sold 20% of America’s uranium to Russia.’

And, go figure, U-1 shut down uranium output at Willow Creek.

Back to the investment outlook for uranium. The economics of uranium mining are terrible right now.

Uranium fetches about $25 a pound. Meanwhile our old friend Rick Rule from Sprott Resource Holdings says the cost of bringing a new mine online is about $75 a pound.

“The exact menu of recommendations is confidential,” says Byron, “but the idea is for Trump to ‘do something’ to increase U.S. domestic uranium output. I’ve heard one industry insider mention getting U.S. domestic supply up to 25% (from the current 1%), which would be quite ambitious.”

A decision is due by mid-July. “If we see U.S. tariffs on imported uranium,” Byron concludes, “watch for several U.S.-centered development and production companies to do quite well, in terms of being in the right place at the right time.” We’ll keep you posted…

From our “great moments in fiat currency” file… 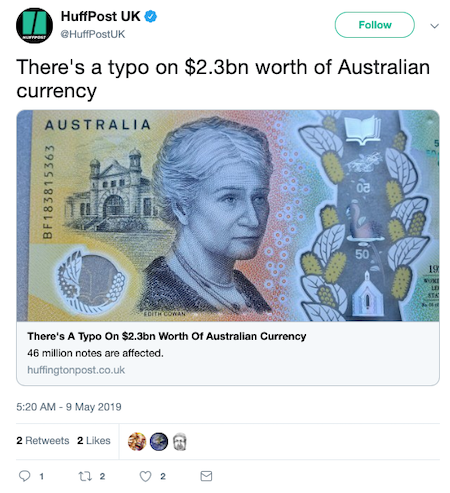 On Australia’s newly designed $50 note is the image of Edith Cowan, the first woman member of a legislative body Down Under. She was elected to the state of Western Australia’s Parliament in 1921.

In the background of the banknote is tiny text of her first speech after taking office: “It is a great responsibility to be the only woman here, and I want to emphasize the necessity which exists for other women being here.”

It took a keen-eyed Instagrammer to catch the flub… 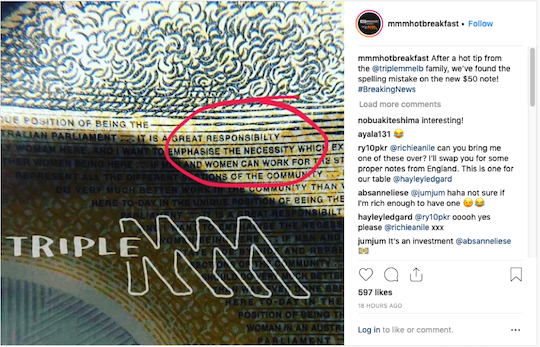 The last “I” in “responsibility” is missing.

Forty-six million of the new notes are in circulation. Yes, they’re still valid for transactions. No, they’re not being recalled.

We think the Aussies are onto something here. The U.S. Treasury could start putting deliberate flubs on its paper currency, hold “spot the mistake” contests and offer a prize of…

Oh, whom are we kidding? The Treasury’s already in hock to the tune of $22 trillion.

More than that, actually, but the debt ceiling kicked in again on March 1. Which means we have another debt-ceiling showdown to look forward to in maybe August or September. Fun times!

P.S. As we get closer to virtual press time, the major U.S. stock indexes have pared their losses.

It wasn’t a Trump tweet, but rather his remarks to reporters at the White House that a trade deal could still get done. “It’s possible to do it; they’re all here,” he said. “The vice premier, one of the most respected men, one of the highest officials in China, is coming.” More tomorrow…