When Tariffs Become a Hammer…

U.S. stocks are getting their footing this morning after the latest shock from Washington Friday.

At last check the Dow and the S&P 500 are slightly in the green. The S&P is holding the line on 2,750. The Nasdaq, however, is sinking further into the red — more about that later.

As indicated here Friday, the president sent markets into a tizzy when he discovered a novel use of tariffs — as a hammer over Mexico to achieve his aims on immigration.

Of course it’s old news that this tariff-humping president has a 16th-century mercantilist mindset. But using trade barriers to meet objectives that have nothing to do with trade? That’s new.

By some accounts, even his own hard-line trade representative Robert Lighthizer thought it was a bridge too far. He worries it could blow up the new-NAFTA-but-don’t-call-it-NAFTA trade deal with Mexico and Canada. Gee, ya think?

With this precedent set, it’s not hard to imagine what might come next…

Oh, wait… that last one actually happened on Friday. It just got lost in the shuffle of all the other headlines.

Back on the China trade front, “regime uncertainty” is setting in.

As we mentioned last month, regime uncertainty is a phenomenon that basically means, “Business owners have no idea what damn fool thing the government will do next” — and thus they pull in their horns, scotching plans for expansion and so on.

According to this morning’s Financial Times, the suits at several multinational tech companies are “poring through their list of suppliers to work out what they might do if a key business was hit by sanctions either from the U.S. or China.”

Most of those executives didn’t want to be cited by name — lest they become the target of presidential ire, no doubt.

Meanwhile, Beijing is preparing its own “unreliable entities list” of U.S. foreign companies after Washington put the telecom giant Huawei on a blacklist last month.

Until fairly recently, China’s state-run English-language news channel CGTN played the trade war more or less down the middle. This morning, amid our usual real-time monitoring of global news sources, we see that changing. Get a load of the over-the-shoulder graphic… 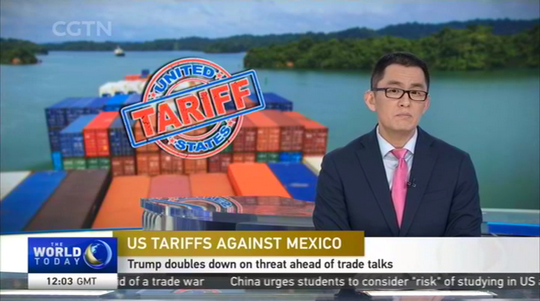 Gee, the scenario we spun last year about Beijing up and deciding one day to kick Apple and General Motors out of China is looking less far-fetched now…

“At the end of the day, prices will go up on things,” says Costco’s chief financial officer Richard Galanti. “What’s interesting is that it’s hard to predict what the impact is.”

Costco delivered its quarterly earnings numbers after the close on Thursday. They were fine. But the real action came during the conference call with analysts. Executives are unsure exactly what the impact of tariffs will be… but they are sure consumers will have to eat some of the cost.

All else being equal, Costco’s customer base is more well-heeled than average. The suits are calculating those customers are willing to pay more and won’t take their business elsewhere. Then again, Walmart is making the same calculation with its own working-class customer base.

Can you say, “consumer price inflation”? And at the very moment the Fed’s preferred inflation measure is ticking up for the first time this year.

It’s as if the politicians and central bankers are conspiring to make our contrarian conjecture last week about “no imminent recession or bear market” look as foolish as possible. Heh…

Which makes us wonder what Kevin Hassett knows that we don’t.

Hassett is chairman of the president’s Council of Economic Advisers. Well, he will be for another month or so; the president announced Hassett’s pending resignation yesterday.

Hassett was a driving force behind the GOP tax legislation. The council under his leadership predicted the corporate tax cuts would lead to major increases in business investment — powering economic growth for years to come.

Hassett’s legacy will be judged by how well that prediction pans out, according to Brian Riedl from the conservative-leaning Manhattan Institute. “At this point, it is too early to tell.”

Or is it? The Congressional Research Service is out with a new paper analyzing the impact of the tax law.

Here’s a chart showing business investment before and after the law was enacted at the end of 2017: 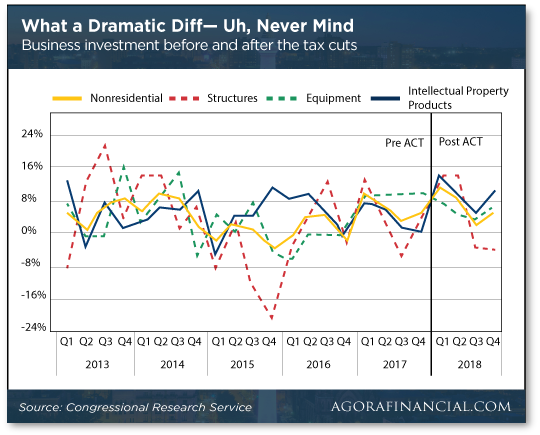 As we suspected all along, the savings from the corporate tax cuts went into dividends and share buybacks — not into investing for future growth. Maybe because corporate America knows we’re late in the boom phase of the boom-bust cycle?

Anyway, no word what Hassett plans to do next; somehow we doubt he’ll be working on a sequel to this book… 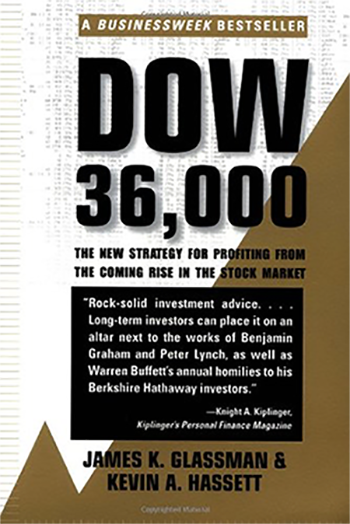 As the day wears on, the Dow is inching higher at 24,845. Another 2,000 points to reach the record is looking like a steep climb right now.

The Nasdaq is adding to Friday’s losses. After the close on Friday The Wall Street Journal reported the Justice Department had opened an antitrust investigation into Google. GOOG is down nearly 6% as we write this morning and that’s a drag on the other FANG stocks and the Nasdaq as a whole.

Treasuries and gold, which rallied hard amid the “safety trade” on Friday, are powering still higher today.

The major economic number of the day is a disappointment.

The ISM manufacturing index for May clocks in at 52.1 — less than expected and the lowest since October 2016.

A reminder that numbers above 50 indicate the factory sector is still growing, so that’s a good thing. But of the 18 sectors tracked in the survey, six are now below 50 and thus contracting. That includes apparel, primary metals and fabricated metals. Survey respondents said they’re jittery about — you guessed it — tariffs.

Traders in cannabis stocks are weighing conflicting headlines from the weekend… and opting to sell for the moment.

On Friday the FDA held a day-long hearing into CBD — the substance in cannabis that makes you calm, but not high. After 100 speakers were heard from, it became evident the agency plans to exercise its authority over CBD with a heavy hand and it was a mistake for Congress to give the FDA this authority in the legislation that legalized hemp last year.

The sector as a whole is selling off today, the MJ ETF down about 2.2%. That said, GW Pharmaceuticals (GWPH) is up 2% because it has the only FDA-approved cannabis-based drug on the market so far.

On the plus side of the ledger, the sixth-largest state by population is on the way toward legalization of recreational weed.

Illinois state lawmakers passed a bill Friday — though not before one holdout, a Democrat from the south suburbs, actually pulled out an egg and a frying pan to recreate that campy old public service announcement from 1987. You can sorta make it out from a distance… 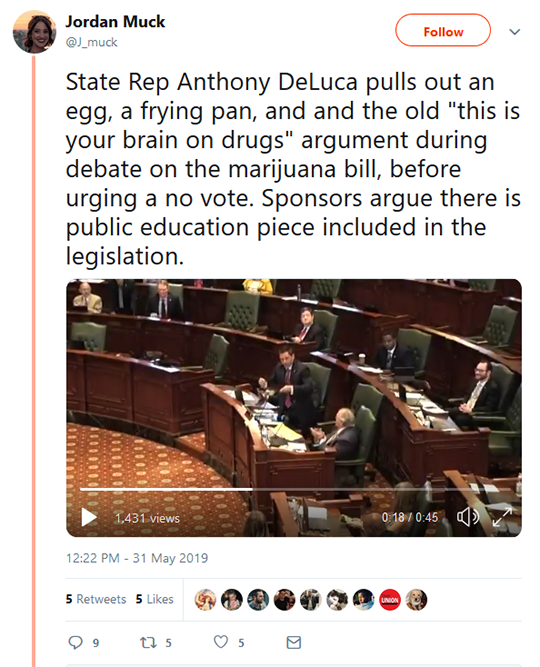 Gov. J.B. Pritzker promises to sign the bill. Illinois becomes the first state to legalize the sale of pot via legislation.

What about Vermont, you ask? The use of cannabis is legal in Vermont, but not the retail sale. That might change next year.

It’s Vermont’s incremental approach that’s getting a second look in New York state now, as a legalization push has hit a speed bump with only three weeks remaining in this year’s legislative session. State Sen. Liz Krueger (D-Manhattan) is the sponsor of a full-on legalization bill and right now she concedes she doesn’t have the votes…

With summer upon us, young people in Colorado are assured they can pursue lemonade entrepreneurship free of interference from the authorities.

Somehow in our years-long chronicle of lemonade-state law enforcement, we overlooked the case last year of the Knowles children in Denver — who set up shop across the street from their house. 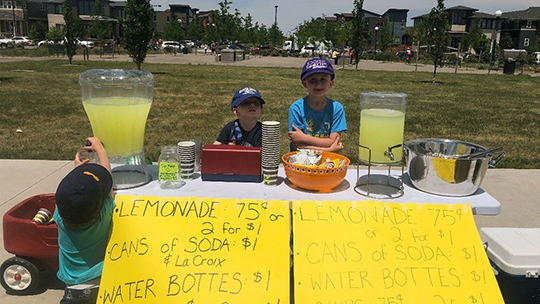 Old-school lemonade, and LaCroix for the hipsters — the Knowleses offered something for everyone (Jennifer Knowles photo)

Denver police showed up and dutifully informed the kids they needed three licenses to operate. So they shut it down.

The hue and cry was enormous, not least because the Knowleses were raising money for needy children overseas.

Hey, it took a lot less time to pass a bill than it did in Texas. As we mentioned in March, similar legislation there took nearly four years to become reality.

On the subject of Big Oil knuckling under to the climate change crowd, a reader writes…

“I sold BP out of my retirement account a month or two ago after reading that their management was planning to knuckle under to the AGW (aka ‘climate change’) fanatics. I didn’t want to leave my money with a business run by fools or con artists.

“I’m a climate change ‘denier’ for the same reason I’m an atheist: The advocates have not proved their cases (although I’ve run across a Jehovah’s Witness or two who can make a better case for the existence of God than the AGW can for their claims). I suppose the Church of England would beg to differ.”

After we posed the question “Where’s the bubble?” we got this sensible response…

“Won’t the final bubble… the financial reset bubble… probably the next bubble… be sovereign bonds? Isn’t that bubble well underway? Didn’t that start inflating in 2009?

“And closely associated with that, aren’t you watching the eurozone bubble, or, related to that, Turkey? Turkey could declare the West predatory, turn to Russia and China and default on its fiat debts. Deutsche Bank should like that.

“And even without a Turkish default, the populist/nationalist movements in Europe are gaining momentum fast and have the potential to dissolve the European Union. Is that not a bubble bursting?

“Perhaps China will come in and buy up their distressed… everything… which will then make China’s debt the bubble of last resort. But however it happens, hopefully before China has to implode, we are approaching the end of fiat ‘money’ and its replacement with some form of an asset-based transaction system on a blockchain.”

The 5: Despite the outcome of the European parliamentary elections, we don’t see any imminent breakup of the euro project or the EU. The most powerful and vocal euroskeptic right now is Italy’s Deputy Prime Minister Matteo Salvini… and he’s been adamant that he wants to reform the system to his liking rather than break up the system.

That said… For a while now, Jim Rickards has seen Turkey slowly peeling off from its Western-NATO orientation and moving in the direction of an “axis of gold” along with China, Russia and Iran.

P.S. If you plan to collect Social Security, you should give this 90-second video clip your full attention.

In that time you’ll discover an income strategy that could help you earn 3.8 times more money than the average Social Security check. We’re talking about a chance to lock in more than $5,092 month after month.

Please note: This video comes down tonight at midnight, so we urge you to check it out right away.