Fed Tees up “Deals of the Decade”

“Traders are now placing more than an 80% probability that the Fed will cut its target interest rate before the end of the year,” says our buyout expert Zach Scheidt.

It’s no secret: Investors are on edge about trade war tensions ramping up between the U.S. and China — *nudge* and now the U.S. and Mexico — and how the tangled deal-or-no-deal will shake the U.S. economy.

And guess who’s swooping in to save the day?

This just in: That 80% probability is now 98.8% — thanks to a woeful jobs number from the Bureau of Labor Statistics this morning (more on that to follow).

In fact, CME Group’s FedWatch Tool now points to an 80% probability by the July 31 Fed meeting!

On Monday, the markets looked like a giant Slip’N Slide… particularly the FANG-heavy Nasdaq, which slid right into correction territory.

Then on Tuesday, we noted this line from an article at CNBC: “Federal Reserve Chairman Jerome Powell signaled the central bank was open to easing monetary policy to save the economy.”

Interesting word choice: “save the economy”… calling to mind an interest rate-fighting superhero. 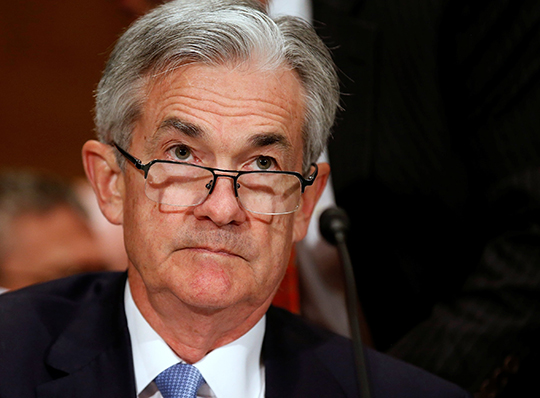 FedMan: No one will recognize me with my glasses on… Now, where’s a phone booth?

“[Rate cuts] could be great news for the buyout market,” Zach says, “leading to many new deals being announced.”

Last year, we saw a bumper crop of done deals in the M&A space, and Zach expects the momentum to keep on rolling.

The 2019 BDO Technology Outlook Survey, for example, finds: “Riding on last year’s robust M&A activity, tech CFOs continue to have hopeful expectations for 2019: 55% expect M&A activity to increase — out of which 16% expect it to increase significantly.”

The reasons Silicon Valley (along with other U.S. tech valleys) gives for M&A activity this year? 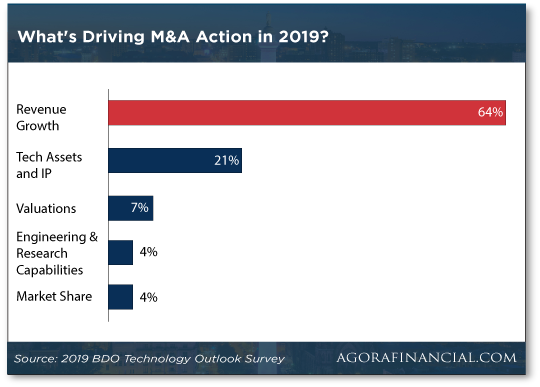 The No. 1 reason — revenue growth — makes abundant sense, especially when earnings are everything (for better or worse).

And, Zach reminds, “In the world of buyout deals, cash is still king.

“Today, it’s becoming cheaper for… buyout deals to be funded with cash,” he continues, “giving buyers even more leverage when entering a buyout deal.”

True, companies can strike a buyout bargain without the outlay of cash; rather than spending precious dollars, deals are sometimes made with shares of stock.

But on the chance of a bidding war, “companies will ‘sweeten’ a deal by agreeing to pay more in cash instead of shares,” says Zach.

“With interest rates falling, buyout companies can more easily borrow capital to sweeten their deals and then pay off their debt over time once the deal is complete.

“That’s just another reason why I’m so excited about the buyout market today,” Zach says.

An added bonus? Market volatility. “Uncertainty in the market gives smaller firms more incentive to align with a larger buyout company that can provide stability.

[Ed. note: Zach signed a multimillion-dollar contract earlier this year with one of the world’s leading M&A experts.

An agreement that gave him access to the world’s most powerful predictive device for massive Wall Street buyouts.

And the only tool of its kind with the power to spot buyout deals before they’re announced.

For you to take advantage of this predictive power? It couldn’t be easier.

Place one simple type of trade…

And the math doesn’t lie: One of Zach’s portfolio picks popped yesterday for a quick 116% gain! That’s the second winner this week… The first? Even better: 125%!

Don’t wait another minute to put Buyout Millionaires Club to work for you!]

About the jobs report: The wonks at the BLS conjured only 75,000 new jobs, versus the consensus forecast of 180,000. More than a little worrying considering 75,000 is only half the jobs needed… just to keep pace with population growth.

Wage growth, too, was weaker than expected — no “inflationary pressures” to make the Fed think twice about cutting rates now (see above).

Regardless of the eye-popping jobs report — apparently bad news is good news — we just saw an alert the Dow’s up more than 300 points (mo’ easy money!) and inching above 26,000.

Looking at commodities, oil’s added $1.02 to its price at $53.61 for a barrel of West Texas Intermediate.

“Now it’s Friday and the gold breakout is confirmed,” he says. For proof, Mike takes a look at year-to-date price data for gold to find “very important support… established at $1,270.

“Additionally, gold’s posted highs were dropping lower and lower from mid-February through the end of May,” he says.

“At the beginning of June we were looking at two… scenarios. If gold broke down below $1,270, any hopes for a rally would be crushed,” Mike continues. “The other scenario would be that $1,270 proved to be a bottom… and a surge was bound to occur.

“Considering how powerfully gold has gapped up off its bottom, there’s strong reason to believe the rally is only getting started.”

Bottom line: “If you don’t own a stake in gold,” says Mike, “now’s the time to get some before prices rocket even higher.”

We’re continuing with income specialist Mike Burnick, who says: “Four times a year public companies report their sales and profit results to the world.” In between? “Wall Street… play[s] the game of managing expectations.

“They raise or lower estimates (mostly lower) for… companies in the months and weeks leading up to earnings reports,” Mike says, “trying to get close to the mark.”

Here’s how the game’s played: “Typically, earnings estimates drift down heading into reporting season and then companies beat estimates by a few cents per share.” 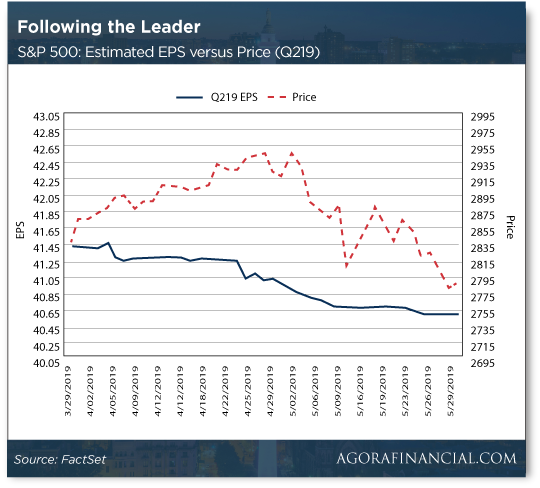 As you can see from the chart, “earnings estimates (solid line) have dropped by about 2% over the past two months,” Mike notes. “And since the end of April, stock prices have followed estimates lower.

“But the question is: How bad is a 2% drop in earnings expectations?” Mike says. “The answer? Not very.”

To wit, Mike takes a look at the past 15 years of earnings data: “The average decline in S&P profit estimates during the first two months of a quarter has been 3.1%.”

He says that despite trade war drama and ramping up tariffs, earnings estimates are actually better than average.

What’s that mean for investors? “You want your money [in] ahead of Q2 earnings,” Mike says, taking a page from “The Great One,” Wayne Gretzky, whose father told him to skate to where the puck is going to be, not where it has been.

“Industrial stocks fell by 6.9% over the past two months. That makes sense considering fears of a deepening trade slump.

“But if actual earnings for Q2 come in better than these dismal expectations,” he says, “these two sectors could enjoy quite a bounce.”

Another sector that’s even more enticing: S&P 500 Energy stocks. “The stocks have cratered 13.5% since late April,” says Mike, “yet earnings estimates have risen 7.7% over the past two months.

“If you want to skate to where the profits are going ahead of the next round of earnings reports,” Mike says, “consider parking some funds in Basic Materials, Industrials or Energy.”

“The FDA is looking into CBD and other cannabinoids,” says Ray, as they have become popular additives to numerous products consumers swear by.

“But the new acting commissioner of the FDA, Ned Sharpless, has made some concern noises regarding cannabinoids, remarking that there’s scant evidence regarding safety….”

Ray says: “That sort of talk spooks cannabis stocks, of course, but in the long run it might actually be beneficial for the cannabis industry.

“When it comes to cannabusiness,” says Ray, “regulation could actually be a good thing.”

Since it’s still early days for the marijuana industry in the U.S., “players need to know where and how they can operate legally,” Ray says.

The fact the FDA’s willing to think through CBD regulations means the industry is developing and being taken seriously.

In the long term: “Sharpless’ comments on safety could spark new studies that can help verify some of the health benefits CBD users attribute to the compound,” Ray concludes.

I scream, you scream, we all scream for… “Operation Meltdown”?! Well, if you’re a NYC functionary, you do…

“New York City has launched what it’s calling ‘Operation Meltdown’ in an attempt to crack down on rampant financial gamesmanship among the ice cream truck vendors that roam the city and avoid paying millions of dollars in parking tickets,” says an article at Slate. 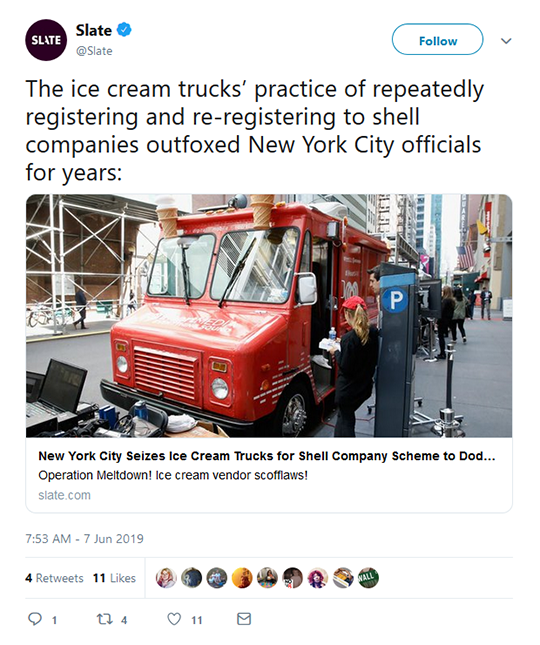 Seems the Good Humor Man’s been playing fast and loose with city parking ordinances by registering — and reregistering — ice cream trucks in the name of shell companies to bypass parking tickets and fines. All in an effort to stay ahead of the competition for the most profitable street corners.

Since 2009, officials estimate the scheme’s bamboozled the city out of $4.5 million… that’s a lotta soft serve!

At any rate, just try explaining that — including scofflaw? — to the kids of NYC… *sad clowns*

A reader submits a three-word reaction to our item yesterday about Starbucks setting up shop only steps away from the Brigham Young University campus in Provo, Utah.

P.S. Over the last two years, 42 significant buyouts have taken place. And Zach’s brand-new tool successfully predicted 40 of them over the course of our testing.

Now for the first time ever, Zach reveals all the details in this invitation.

Including how you could claim your own “One Day Bonus” without ever working a single day on Wall Street.

There’s no time to waste…