“I thought I was in the clear,” says a resident of Reno, Nevada. “From everything that I had heard, CBD oil wasn’t supposed to show up on drug tests.”

A recent article at Consumer Reports follows the story of “J.C.,” a 26-year-old video producer who failed his company’s drug test.

“He hadn’t used marijuana,” the article says, “Instead… [he] had taken CBD, or cannabidiol, from hemp to help with sleep and anxiety.

“And unlike THC, a related compound in cannabis plants, CBD can’t get you high.”

As CBD goes mainstream — with related products on shelves at some chain drug stores — there are important things to know… before putting your livelihood on the line.

While Congress made hemp-derived CBD legal at the federal level last year and — as of January 2019 — 64 million Americans said they’d tried it in the last 24 months, CBD might have been a case of cart before the horse.

There’s no regulation for labeling CBD products; in fact, the safest bet for consumers so far is a Certificate of Analysis (COA) manufacturers voluntarily provide for their products. A COA lists the THC level along with other fillers. (Quick note: Indiana and Utah are the only states that legally require a COA… good on them.)

For now, skip on products that don’t provide a COA because…

A 2017 JAMA study, for example, found 18 of 84 CBD-infused products purchased online contained enough THC to cause “intoxication or impairment.”

Certainly enough to show up on a drug test… 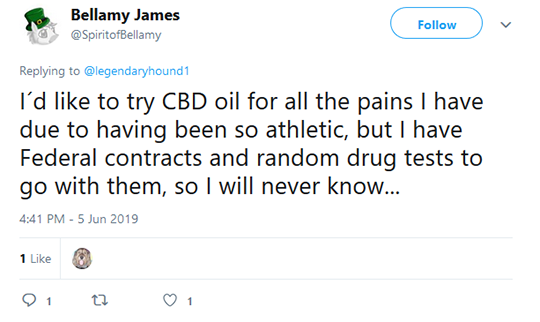 Our guest “tweeter” might get his chance after all… keep reading.

To make matters worse, states aren’t all on the same page when it comes to how they test hemp for THC content. While the aim is for no more than 0.3%, nonstandardized testing can yield different results.

As for failed drug tests because of CBD products, you better believe there’s a class action lawsuit in progress.

But — fear not, CBD (and paycheck) enthusiasts — we reported last week, the FDA’s acting director Ned Sharpless is calling on the agency to take a closer look at CBD. Regulation’s a-comin’…

And our pot stock authority Ray Blanco believes that’s a very good thing for cannabusiness as a whole. “Players need to know where and how they can operate legally.”

Meanwhile, last week was a tough one for pot stocks… but Ray believes: “Pot stocks are about to snapback and rally.”

“Looking at the past three years of performance using our proprietary Penny Pot Index you can clearly see how dips (like the one we’re experiencing now) resolve themselves.” he says.

They surge and set new highs: 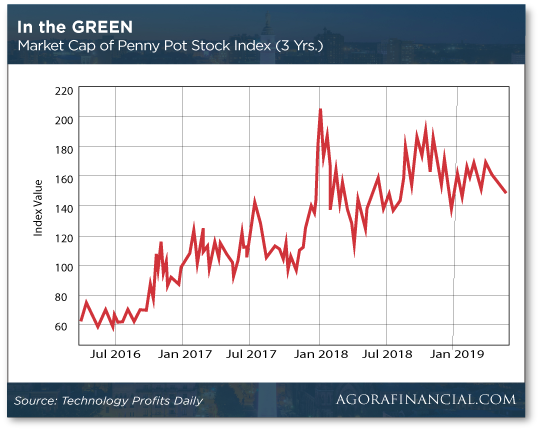 “For starters,” Ray says, “since last November’s midterms we’ve seen a swath of states legalize adult-use marijuana in some form or another.”

The 5’s already reported on the nail-biter that went down in Illinois as state lawmakers passed recreational marijuana just before the end of session. Next session? New York and New Jersey will probably pass state marijuana laws.

“We also are making headway on the federal level,” Ray says. “Trump’s Farm Bill legalized hemp and CBD federally, and now new cannabis banking legislation is under review in Congress.”

Ray says: “Looking at the raw industry data is what gets me truly excited about our opportunities this year and for many [years] after….”

According to a new 2019 industry report from Marijuana Business Daily: “Retail sales of medical and recreational cannabis in the United States are on pace to eclipse $12 billion by the end of 2019 — an increase of roughly 35% over 2018 — and could rise as high as $30 billion by 2023.” 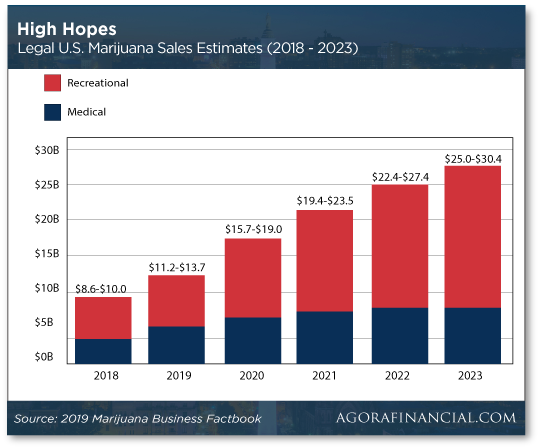 “The projections are so good even dyed-in-the-wool pot prohibitionists are jumping in for a chance to strike it rich in pot,” Ray says.

“If you’re not parking some funds in pot stocks for the long term,” he says, “you’re missing out on some amazing opportunities to build your wealth.”

[Ed. note: Ray Blanco has decided to take a group of 100 readers behind the scenes…

And show them how to retire rich with as little as $100 before the end of the year.

That means he thought you’d be a great fit to be a part of this small cohort!

Just click here for the details… with a time-sensitive invitation.]

The NFIB’s Small Business Optimism Index blew away expectations at 105.0 for May, up from April’s 103.5… a decent recovery after growing pessimism late last year into early 2019. 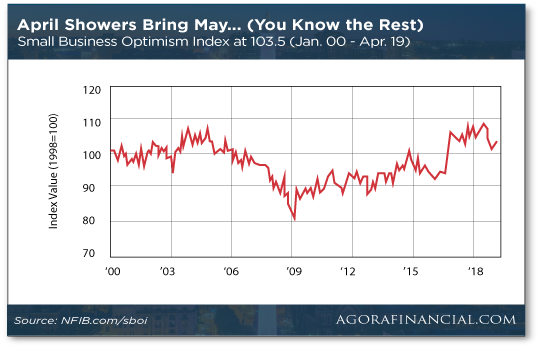 “Small business owners are demonstrating a continued confidence in the strength of the economy and are betting capital spending dollars on it,” says NFIB Chief Economist William Dunkelberg. “This solid investment performance is supporting ongoing improvements in productivity and real wages.”

Still, good help really is hard to find. “Quality of labor” being the No. 1 problem for 25% of survey respondents — the highest in the survey’s 10-year history. (Taxes being a secondary concern at 16%.)

In short, if there is an economic slowdown, it’s not showing up on Main Street…

This just in: “Electric cars won’t save us,” says website TreeHugger. “British scientists do the math and find that we come up short for cobalt, lithium and copper…

“They calculate that, even with the most efficient batteries available, full electrification of the auto fleet by 2035 would need a lot more mining.”

A letter from professor Richard Herrington, head of Earth Sciences at London’s Natural History Museum, along with colleagues says:

The worldwide impact: If this analysis is extrapolated to the currently projected estimate of 2 billion cars worldwide, based on 2018 figures, annual production would have to increase for neodymium and dysprosium by 70%, copper output would need to more than double and cobalt output would need to increase at least three and a half times for the entire period from now until 2050 to satisfy the demand.

(Did you catch the mention of rare earth elements neodymium and dysprosium? A story The 5 followed— most recently — last week.)

The letter goes on to add up the energy needed to make enough electric cars to replace existing internal combustion engine (ICE) vehicles.

Believe us… it’s a crap-ton, making the proverbial cure worse than the disease.

The article at TreeHugger concludes: “We have to stop talking about how electric cars will save us; it takes too much stuff to make them all, puts out too much upfront carbon, and nobody is going to make enough of them fast enough.”

Walgreens sent a letter in September to employees who retired early. The gist? “Enjoy early retirement! (Er, we’re yanking your health coverage.) Good luck till you qualify for Medicare at age 65!”

According to an article at CNBC: “Some 550 retirees receive the subsidies from Walgreens before they turn 65 and are eligible for Medicare.

“Under the age restrictions laid out in the September letter, they won’t receive the payments, which vary in amount based on employees’ years of service.”

Derek Guyton, partner at benefits business Mercer says: “Pre-65, I do think it’s unusual to take people who already have a subsidy right now and eliminate that subsidy.

“What’s more common is you tell people way ahead of time you’re not going to have this subsidy when you get to 55…” he says.

Yeah… “way ahead of time” does make sense, Derek.

CNBC says: “Walgreens told retirees it would share more details sometime this year. Retirees say they have yet to hear from the company. Until then, they’re trying to figure out what to do about their previous spending plans.”

Walgreens is just a straw in the wind…

“The 52-year-old… created his company Tyson Holistic in 2016 and sells an array of marijuana merchandise as well as premium marijuana strains, extracts and edibles,” says the Daily Mail. 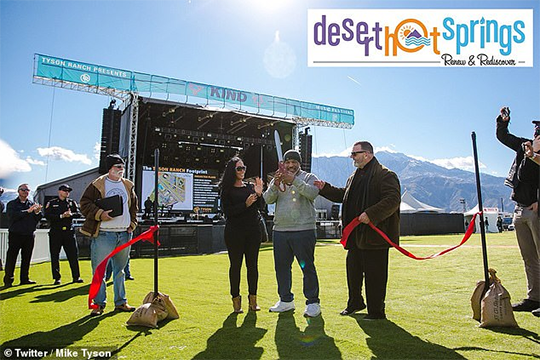 As for a music festival venue, if only the Fyre Festival had done things right, it could have been the Fyre Up Festival (we better trademark that).

Instead, the Tyson Ranch hosted the Kind Festival in February where some off-brand rappers performed (sorry)… and a whole lotta concert-goers got buzzed.

During the concert, a DJ reportedly hollered: “Mike Tyson’s building a whole ranch out here, y’all! It’s gonna have the world’s longest lazy river! This s**t is serious!”

Here we thought Tyson would have gotten into the tattoo-removal biz. Just sayin’.

[While we’re on the subject, Dave’s promised to tell readers at The 5 about the time he met a young Mike Tyson… Stay tuned.]

As for NBA playoff giveaways, a sharp-eyed reader says: “I doubt if the damage being wrought in Toronto even approaches what McDonald’s lost in their 1984 Olympic Games promotion…

“They gave away a Big Mac for every gold medal scored by Team USA, with fries and drinks the prizes for second and third.

“If the USA swept the medals, you got all three prizes for the same card.

“Typically the U.S. was winning around 35 gold medals per Olympics in those days, but the Soviet bloc decided to repay our 1980 Moscow boycott by no-showing the 1984 games in Los Angeles.

“With literally no competition left, the U.S. won 83 gold medals and the country stuffed itself on free Big Macs for a month.

“I guess it’s true what they say: Those who fail to study history are doomed to giving away a whole lot of free food.”

P.S. You have one new friend request from Ray Blanco…

Just a few days ago, he started the most elite group our company has ever seen…

And now he’s looking for 100 of our best readers to join.

And if you’re reading this…

That means he’s sent YOU an invitation!