When he had the floor, the mostly middle-of-the-road candidate took a moment to pat himself on the back about his progressive track record on marijuana legalization.

“You don’t need big government to do big things,” Hickenlooper said. “I know that because I’m the one person up here who’s actually done the big progressive things everyone else is talking about.”

Hickenlooper must have selective amnesia… because he flip-flopped on legalization so many times it was vertigo-inducing.

In September 2012, he went public with his opposition to Amendment 64 — Colorado’s legalization measure — saying: “Colorado is known for many great things — marijuana should not be one of them.” Hickenlooper further questioned the deleterious effects of legalization on the Centennial State’s children. 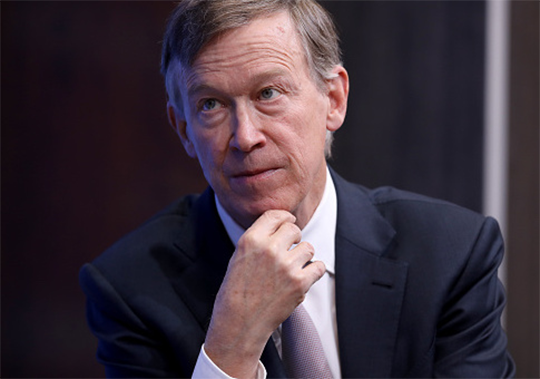 By 2014, long after Amendment 64 passed by a margin of 55% of voters, Hickenlooper called the measure “reckless” but conceded the same people who were using marijuana before legalization — eh — were probably the same ones using after.

And Hickenlooper without a doubt came around to the idea of regulation and juicy state revenue. C’mon… the guy is a politician. Which led to Hickenlooper backtracking on the “reckless” claim in favor of the more moderate word risky.

By 2017, Hickenlooper’s position on legalization had changed so radically he stood up to then-U.S. attorney general — and dyed-in-the-wool marijuana hater — Jeff Sessions.

In a letter to the AG, he said: “Colorado’s system has become a model for other states and nations.

“We are confident that if we work together, we can maintain a responsible regulatory and enforcement model that protects public safety, public health and other law enforcement interests.”

And the Land of Lincoln’s trying to do just that…

“Illinois made the decision to legalize the possession and purchase of recreational marijuana,” says our pot stock authority Ray Blanco.

Making Illinois the 11th state to do so; now “over one-fifth of all U.S. states have now legalized marijuana for recreational use!”

Adult residents of the state — 21 and over — can buy and possess 30 grams of marijuana, five grams of marijuana concentrate and infused products that contain no more than 500 milligrams of THC. Rules are different for nonresidents, who will be able to purchase half of the above amounts when visiting the state.

Also, if you have an Illinois medical marijuana card (and a green thumb), you can grow up to five marijuana plants at home.

Ray says: “What’s even more amazing is that [the state] is going back through cases of possession up to 500 grams and allowing individuals and state attorneys to petition these cases.”

Lobbyists in the Empire State are planning a six-month blitz to legalize the sale and use of cannabis within state lines.

Recently, “legislation passed stating that the possession of up to two ounces [would] incur a $200 fine and possession of one ounce or less would be a $50 fine,” says Ray.

Misdemeanors, to be sure, but advocates at the Drug Policy Alliance say it’s not enough, particularly considering “this measure will not do anything for those incarcerated for possession like the legalization in Illinois does…

“But the message is clear,” Ray says. “States are fighting back against the war on drugs.” To that end…

“Last week, the U.S. House of Representatives approved a bipartisan amendment that stops the U.S. Department of Justice from meddling with state-legal cannabis programs.

“The vote to approve this amendment was won by historic measure,” Ray says. “It was a vote of 267-165 (including 41 Republicans).

“Legalization supporters consider this a huge win and an indication that the tides are turning in Congress.”

“The historic nature of this vote cannot be overstated,” says Cannabis Trade Federation CEO Neal Levine. “For the first time, a chamber of Congress has declared that the federal government should defer to state cannabis laws.”

As a pot stock expert, Ray’s takeaway: “This is an exciting time to be a marijuana investor… and it is just getting started,” he says.

[Ed. note: Ray Blanco’s decided to take a small group of 100 readers behind the scenes of the blossoming marijuana industry…

And show them how to retire rich with as little as $100 before the end of the year.

That means he thought you’d be a great fit to be a part of this small group of folks!

It’s not the U.S.-China trade war that’s making headlines this morning; instead, we learn the U.S. plans to slap retaliatory tariffs on $21 billion worth of EU products.

At issue, a long-standing subsidy dispute between Boeing Co. and Airbus SE. “The Office of the U.S. Trade Representative estimates the EU subsidies to Airbus cause approximately $11 billion in economic harm to the U.S. annually,” Bloomberg reports.

And the World Trade Organization agrees, finding “EU subsidies violate international trade rules,” says Bloomberg. “[The WTO is] expected to decide this summer on the amount of countermeasures the U.S. can impose.”

And in a case of tit for tat, the EU has appealed to the WTO, claiming U.S. subsidies to Boeing hurt the Union’s own bottom line; the EU wants to smack $12 billion worth of tariffs on U.S. products.

As for commodities, oil’s down (just in time for that Independence Day road trip?) to $57.21 for a barrel of West Texas crude.

“Bitcoin is our crypto most affected by global events this month,” says early crypto adopter James Altucher, “but there’s a larger trend happening.

“Large holders (otherwise known as whales) have been accumulating bitcoin,” he says. One crypto exchange in London even got a buy order for “25% of all BTC.”

“That’s insane,” says James, “but that’s the… demand there is for bitcoin.” As for that massive order, it was “impossible to fill since there isn’t that much bitcoin available on open markets to buy.”

And this is sorta shocking: Roughly 24% of mined bitcoin is lost or frozen because of lost/forgotten passwords. *Palm slap*

James says: “Only about 5 million BTC circulate freely” because, ultimately, people are buying, not selling.

“Now, people have been saying institutional investors are coming,” James says, “but they’re already here. Out of all of the funds in Coinbase Pro, 60% are institutional.

“On top of this,” James continues, “more traditional hedge funds are looking to allocate a small percentage of their portfolio to crypto.

“And then there are sovereign wealth funds with close to a trillion in assets who are looking into crypto,” says James. “The ones I’ve heard about are looking specifically at crypto hedge funds and bitcoin.

“For that reason alone, bitcoin has to be the foundation of any sound crypto portfolio. Its value is only going to continue to increase.”

“One of my favorite ‘canary in the coal mine’ indicators is the Cass Freight Index, which measures the volume and dollar amount of freight that is delivered in North America.”

Over the past two years, Mike notes, with a strong and expanding economy, the amount of goods shipped across the continent increased. Makes sense…

“Conversely, when the economy contracts, the volume of freight slows down,” Mike says. “And that… is exactly what the latest Cass Freight Index is showing.” 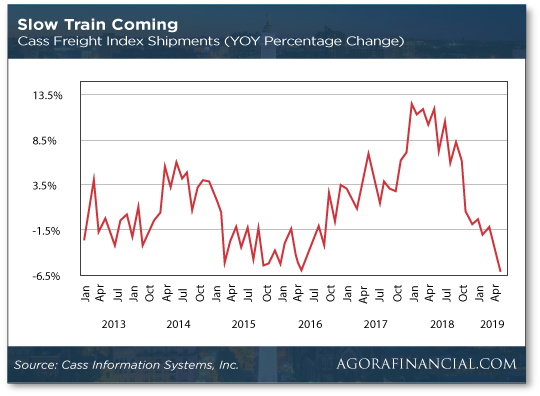 You can see from the chart, the Cass index slumped 6% in May. “After showing positive growth for the previous 24 months in a row, the index has dropped for the last six straight months,” says Mike.

Analyst Donald Broughton of Cass says the data have gone from “warning of a potential slowdown” to “signaling an economic contraction.”

Broughton’s conclusion: “While we are still not ready to turn completely negative in our outlook, we do think it is prudent to become more alert to each additional incoming data point on freight flow volume.”

Mike agrees… and while he’s still reasonably optimistic about the stock market, he says: “I believe it is important to at least have a well-articulated, defensive strategy to protect yourself when the bull market finally does run out of steam.”

More on “a Florida man” (and this time it’s a twofer): Burglars in Florida thought they’d hit the mother lode by opening an ATM with a blowtorch.

One suspect — armed with a crowbar — appeared to be the lookout, while the other would-be burglar attempted to open an ATM with a blowtorch. (This guy’s seen waay too many Tom Cruise movies.) 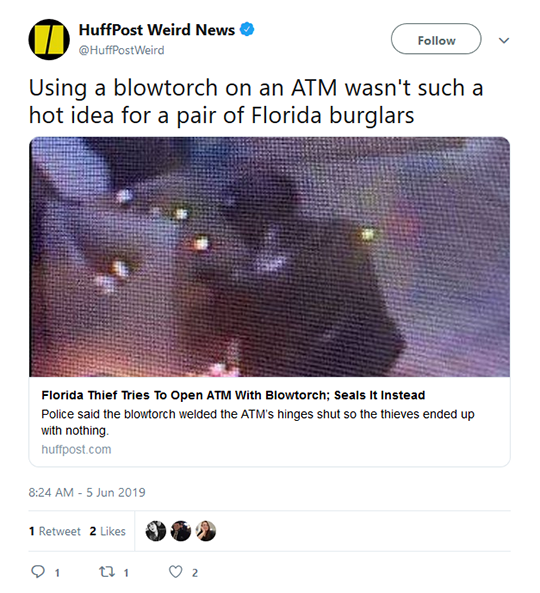 Not hard to figure out what happened next. Let’s just say the $10,000 or so cached in the ATM was safer after the burglar got to it than before… because the genius welded the machine’s hinges shut.

To which we say — in honor of The Godfather — “leave the blowtorch, take the crowbar.”

P.S. You Have One (1) New Invitation From Ray Blanco!

Just a short while ago, he started the most elite group our company has ever seen…

And now he’s looking for 100 of our best readers to join.

And if you’re reading this…

That means he’s sent YOU an invitation!