The Truth About the Trump-Kim Summit

Much as it pains us, we have some unfinished business from last weekend. 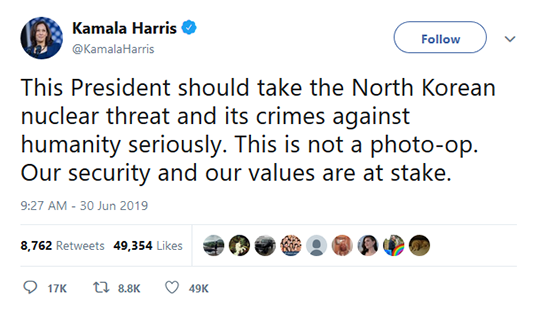 Oh, but it wasn’t just Democrats running for president who ran with the “photo op” narrative about the Trump-Kim meeting at the DMZ. It was the uniform spin from Establishment media in the United States. 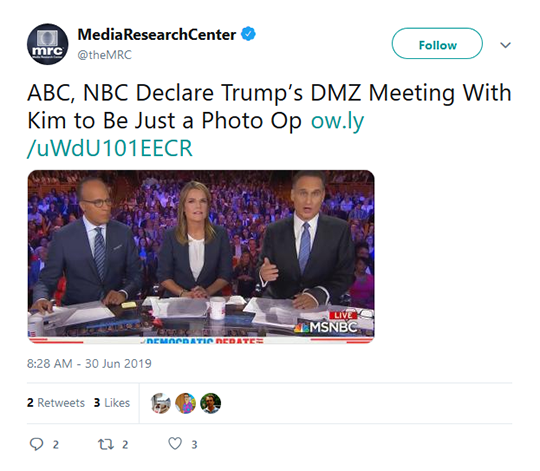 Ever since Trump’s first meeting with Kim just over a year ago, the media malfeasance on this crucial matter — ending a state of war that’s still officially in effect after six decades — is nothing short of epic. And I say that with the authority of someone who worked in the TV news racket for two decades.

As we’ve pointed out more than once, Donald Trump isn’t driving the bus when it comes to peace on the Korean Peninsula.

It’s South Korean President Moon Jae-in. And he’s doing so with support from a large majority of South Koreans. He was elected on a platform of rapprochement with the North. He helped bring about the most recent meeting this weekend. Polling data out this morning find 63% of South Koreans feel good about the outcome of Sunday’s talks.

But for a Trump-obsessed U.S. media, it’s as if the South Koreans don’t even exist. Hey, they only live there, right?

No, it’s all about Donald Trump “legitimizing a dictator” during a “meaningless photo op” that “accomplishes nothing of substance.”

Except it appears something of substance was accomplished.

Trump’s top North Korea negotiator Stephen Biegun says there was movement toward some sort of first-step deal — Washington would lift some of the sanctions on Pyongyang in exchange for a freeze on the North’s nuclear weapons development.

No, it’s not complete “denuclearization,” but it’s progress.

Really, it seems the key to progress toward peace on the Korean Peninsula is to keep National Security Adviser John Bolton as faraway as possible from any talks on the subject.

By most accounts, it was Bolton who sabotaged the second Trump-Kim meeting in Hanoi earlier this year. This time around, however, Bolton was sent on a mission to Mongolia. Literally… 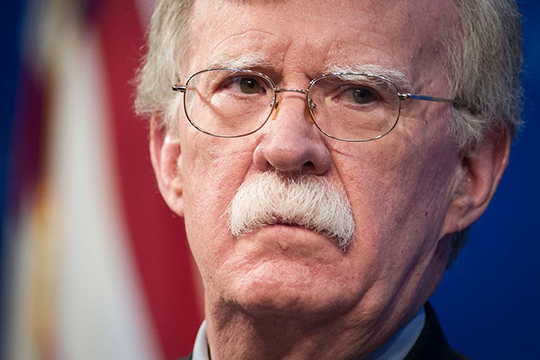 So much for the Establishment narrative.

As I’ve related before, my disillusionment with Big Media began with the war fever leading up to the 2003 invasion of Iraq — when I was still in the business and saw firsthand how skeptical and dissenting voices were squelched.

My disgust was renewed this spring with the release of the Mueller report — which dumped an ocean of cold water on the “Russian collusion” narrative after two years of nonstop hysteria.

If you too are fed up, you’ll want to keep an eye on your inbox this Friday — when I start pulling back the curtain on a project the likes of which I’ve never done before. I see it as your chance to stick it to the media… and collect some impressive gains at the same time. Stay tuned…

The markets closed early today in advance of the holiday tomorrow… and the major U.S. stock indexes all notched records.

The big economic number of the day is the trade deficit — $55.5 billion for May, more than expected and the biggest in five months. Exports grew, but imports grew more.

Gold has recovered nearly all of its dramatic losses Sunday night and Monday… and no, it’s not about the president’s picks for the Federal Reserve.

With electronic trading still underway as we write, the bid is $1,417.

Contrary to what a certain financial website would have you believe — ahem, it rhymes with “aero edge” — the jump has nothing to do with economist Judy Shelton’s nomination to the Fed Board of Governors. Gold started taking off from the $1,390 level around 11:00 a.m. EDT yesterday. The president didn’t tweet the announcement about Shelton until dinnertime on the East Coast.

Shelton is noteworthy because she’s gotten some press as an advocate of the gold standard — albeit an odd form of gold standard that has little to do with the classical gold standard. (We won’t take you into the policy weeds. You’re welcome.)

But Trump didn’t choose Shelton because of any fealty she has to the gold standard. He chose her because — as she put it to The Washington Post last month, “I would lower rates as fast, as efficiently, as expeditiously as possible.”

Yep. As Pace University economist Joe Salerno quips, Shelton’s position appears to be, “I favor sound money — and plenty of it!”

Trump also nominated economist Christopher Waller to fill the other Fed vacancy. He too would seem to be on board with the president’s easy-money jihad. According to The Wall Street Journal, “In a 2015 paper, Mr. Waller found that injecting more money into the economy can help revive an economy when central banks have already brought rates down to zero.”

Whelp, this president needs every edge he can get going into the 2020 election if he hopes to keep inflating the “big, fat ugly bubble” he warned about during the 2016 debates…

Meanwhile, a convicted criminal is in line to run the European Central Bank.

Maybe you saw the news: Christine Lagarde, head of the International Monetary Fund, has been chosen to succeed Mario Draghi as chief of the ECB. 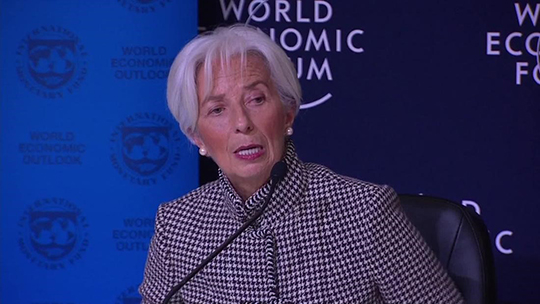 Is it just us, or did half the stories we saw from U.S media describe her as “stylish”?

The news reminded us of a time when the long knives were out for Lagarde in late 2015: She’d been ordered to stand trial back home in France for “negligence by a person in a position of public authority.”

It was an odd case dating way back to 2007, when she was French finance minister. She’d authorized a $438 billion bailout of sorts for a businessman named Bernard Tapie. Tapie had sold off one of his companies and he claimed the bank that handled the sale — which was partly state-owned — defrauded him by deliberately undervaluing the firm.

Cronyism? Absolutely. But criminal? “Someone wants her gone,” we said.

But Lagarde is nothing if not a survivor. A year later, in December 2016, she was convicted… but spared the fine and the year of jail time that came with the conviction.

Back at the IMF, “First Deputy Managing Director” David Lipton will take over as acting director from Lagarde.

He won’t get the permanent gig; tradition reserves it for a European. But as our Jim Rickards explained here years ago, Lipton exercises more power than the director “because the United States has a veto over all important actions by the IMF.”

That matters if Jim’s right and the IMF turns out to be the last line of defense during the next global financial crisis, whenever it comes.

Small (but important) victory: Congress and the White House have just reined in one of the IRS’ most outrageous abuses.

In 2013, we told you about the Dehko family — owners of a grocery store in the Detroit suburb of Fraser. The IRS seized their bank account — more than $35,000 — on grounds the Dehkos were engaged in “structuring.” It was a civil forfeiture — which means the IRS could grab the money with no criminal charges, much less a conviction.

As you might be aware, federal law requires banks to report all cash transactions over $10,000. It is illegal to “structure” cash deposits to get around this requirement. That’s a problem for retailers who have lots of cash-paying customers — not least because many small-business insurance policies limit coverage for theft or other loss of cash to $10,000.

Nor were the Dehkos alone. There was a dairy farmer in Maryland, a restaurant owner in Iowa, a convenience store owner in North Carolina…

In time, the publicity was such that the IRS abandoned the practice. Yesterday, the president signed a bill forbidding the IRS from ever resuming it — you know, in case the bureaucrats get any ideas.

“Innocent entrepreneurs will no longer have to fear forfeiting their cash to the IRS, simply over how they handled their money,” says Darpana Sheth from the Institute for Justice — the nonprofit that’s done yeoman’s work defending the victims of these abuses in court. “Seizing for structuring was one of the most abusive forms of civil forfeiture, and we’re glad to see it go.”

To the mailbag: “So lobbyists in the People’s Republic of New York are planning a blitz to legalize the sale and use of cannabis?” writes one of our regulars. “Go figure.

“This is the state where the unholy trinity of Cuomo, Gillibrand and Schumer are, shall we say, open for business. If they can regulate (read: tax) it — and line their corrupt war chests in the process — their positions will ‘evolve’ accordingly.

“As if we aren’t overtaxed enough already. But they’re still just getting warmed up.

“I was born and raised in upstate New York, but I want out of this progressive use case so badly…

The 5: Yeah, Cuomo’s turnabout was even more dramatic than that of former Colorado Gov. John Hickenlooper, which Emily cited here yesterday.

As recently as 2017, Cuomo was denouncing weed as a “gateway drug” — as if it were still 1973 and Nelson Rockefeller were still governor!

But you’re right, he can’t resist that other kind of green — in the form of revenue.

“Your conclusion is valid,” a reader writes about the barriers to self-employment in America — which is something of a hobby horse for your editor.

“However, it is totally illusory to expect that special relief of payroll tax and health insurance premiums could ever be enacted.

“The stuff you cited from Altucher is realistic. Individual catastrophic health plans with health savings accounts can likely be obtained cheaper than your employer paid for you, depending on your health and age.

The 5: Yes, but those policies are covering less and less as time goes on.

And we have no illusions that Congress will act to lift the burdens we lament.

But the health care situation will eventually resolve itself — painfully so.

If we may mount another hobby horse to close out today’s episode of The 5, the health care system in this country is doomed. As in it will fail catastrophically no later than the early 2030s, for reasons we laid out most recently here. On its current trajectory, health care spending will take up half the federal budget by that time. It’s not sustainable.

Exactly what that collapse will look like we can’t say. But unless you’re really getting up there in age, most of us will still be around to witness it.

P.S. U.S. markets are closed tomorrow for Independence Day, but we’ll be back with a best-of episode of The 5 — one that we suspect will make you think hard about the meaning of the holiday.