It hasn’t happened in a decade — until now: “Stocks are yielding more than U.S. government Treasury bonds,” says our Zach Scheidt, back today to carry on our theme about the war on savers.

“It’s just the latest example of markets working the opposite way of how they’re supposed to.

“The craziness has inspired one of the most successful hedge funds I follow to change its strategy. It’s been moving out of high-yield stocks to focus on a sector it thinks will be even hotter.”

And Zach says you’d be wise to follow its lead. We’ll show you how in a moment.

But first, a few words about how we got here. Three words, to be exact — negative interest rates.

“Ordinarily when you buy a bond, you are guaranteed two interest payments a year, plus the bond’s face value when it matures,” Zach explains.

“But governments throughout Europe and in Japan are issuing bonds that pay little to no interest. Then they’re selling the bonds for more than their face values.

“In other words, people are buying government bonds knowing they will lose money on the deal.”

Barely two weeks ago, the amount of government debt worldwide carrying a negative yield totaled $15 trillion. That number has now swelled to $17 trillion.

“You’re seeing it pretty much throughout the world,” former Federal Reserve Chairman Alan Greenspan told CNBC yesterday. “It’s only a matter of time before it’s more in the United States.”

With so much government debt around the globe guaranteed to lose investors money, investors are flooding into U.S. Treasuries, where the return is still positive for now. That pushes Treasury prices up… and Treasury yields down. At or near record lows, in fact. The benchmark 10-year note yields 1.58% this morning — up a bit the last couple days, but still near the all-time low in the summer of 2016. 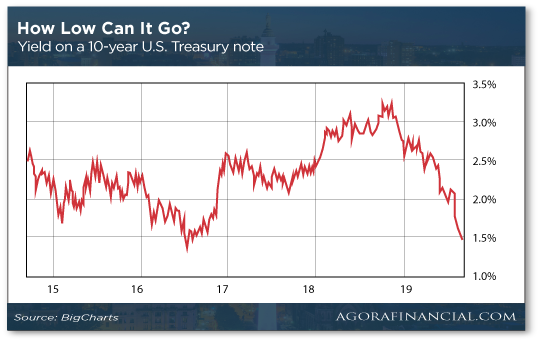 At least it’s a good time to take out a mortgage. A 30-year fixed goes for an average 3.49% this week, the lowest in nearly three years.

The drop in rates has been so steep that the typical S&P 500 stock delivers a higher yield than a 30-year Treasury bond.

As we indicated yesterday, this isn’t how it’s supposed to be. “Most people buy stocks for price appreciation,” Zach reminds us. “Sure, dividends are nice, but they’re usually treated as an afterthought. If people want yield, they gravitate toward bonds.”

Now the dividend is the main attraction.

This is problematic because “all the attention high-yield stocks are getting may make it harder to find good bargains,” says Zach. That is, quality dividend payers are being bid higher — diminishing the potential for that juicy price appreciation in the future.

“One of the most successful hedge funds I know is already running into that problem,” Zach points out.

“So it’s shifting money into what it thinks will be the next big growth area.

“Orbis Global Equity Fund has been in business since 1990. Over those nearly 30 years, its investments have done twice as well as the global stock market.

“In short, these guys know what they’re doing.

“Their strategy for success is pretty simple — identify market sectors that are about to take off and then ride them until they run out of steam.

“Up until recently, it had been very bullish on high-yield stocks… correctly anticipating that investors would be desperate for income. But now that cash is flooding into these stocks, Orbis thinks the field is getting crowded. So it’s moving into what it thinks will be the next hot sector: cyclicals.”

If that word trips you up, Zach has a quick explanation.

“When times are tough, you don’t stop buying gasoline or food. But you will put off taking a vacation or buying a new car until things improve.

“The companies that sell these optional products and services are known as cyclicals. Their profits and losses are directly tied to how the economy is doing.

“Orbis believes these stocks now offer a tremendous amount of upside, so it’s loading up on them.”

It’s an intriguing thesis… not least because depending on the day, the media are aflutter with stories that the next recession is just around the corner, if it’s not already here. But Orbis is clearly betting otherwise.

If you want to follow Orbis’ lead, you could look at the Fidelity MSCI Consumer Discretionary ETF — ticker symbol FDIS. It’s loaded with companies that benefit the most when consumers are feeling flush. The top five holdings are Amazon, Home Depot, McDonald’s, Starbucks and Nike. And it has a rock-bottom expense ratio for this kind of ETF — 0.084%.

To the markets today, where it’s “risk on” for no good reason.

Overnight brought word that U.S.-China trade talks will resume next month. Suddenly the buzz is that a “deal” is once again “at hand.”

We don’t buy it any more than we bought it earlier this year. The trade war will last for years, maybe decades, and it will extend to realms far beyond trade.

But Wall Street’s preferred narratives die hard, and that shows up in the headline reaction…

Also fueling the rally is the day’s big economic number.

As you might recall, on Tuesday the ISM manufacturing index turned in a miserable reading of 49.1 — a sub-50 number that suggests the factory sector is shrinking, not growing. It was the poorest showing since January 2016.

As manufacturing has weakened all this year, the worry has been whether that weakness would spill over into the services sector. Today’s ISM nonmanufacturing index says “not yet.” The number came in way better than expected at 56.4. The index has turned in over-50 readings consistently since early 2009.

Maybe those Orbis folks are onto something…

The rally is so strong, not even the latest Fed chatter can derail it.

This morning’s Wall Street Journal had one of the Federal Reserve’s carefully planted stories aimed at adjusting market expectations. (See our main item from Aug. 23 about “The Fed’s Frankenstein Monster.”)

The WSJ’s Fed reporter Nick Timiraos cited “interviews with officials and their public speeches” in assessing the Fed will cut the fed funds rate only a quarter percentage point this month — not a half.

Looking at the action in fed funds futures this morning, traders are pricing in a 96% probability of a quarter-percent cut — and an outside chance the Fed will leave the rate where it is now at 2.25%.

Your government in action: After more than three weeks, the TSA has determined that novelty Coke bottles shaped like bombs from the Star Wars movies do not pose a threat to the traveling public. 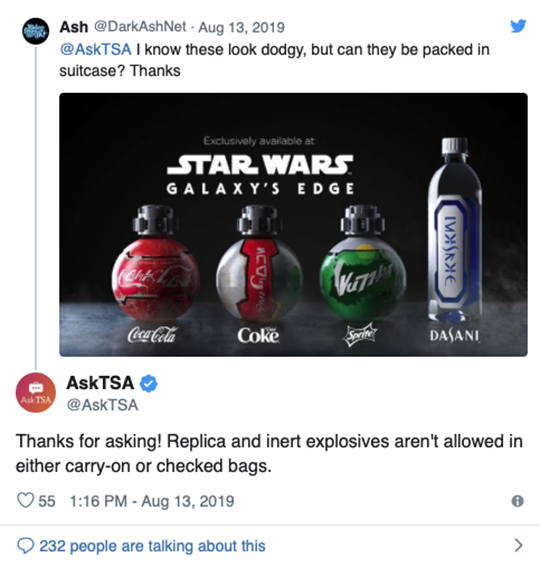 The directive affected a lot of people, seeing as the bottles are sold in Disney theme parks.

It also touched off a tsunami of “Are you serious?” chatter on social media.

For a while, the TSA doubled down, insisting “those items could reasonably be seen by some as replica hand grenades.” (The old “some say” dodge.)

Bureaucrats don’t mind if you hate them… but they do mind if large numbers of people mock them, because that serves to undermine their authority.

So after going through the charade of investigating the matter, the TSA issued a statement yesterday: "We have completed our review and instructed our officers to treat these as an oversized liquid.”

Which still means you have to put it in checked baggage because of the nonsensical 3.4-ounce rule. But that’s a story for another day…

We got a surprising amount of pushback to our characterization of ultralow interest rates as “the $1 trillion swindle.”

“Why does that amount to a swindle?” writes one reader. “What do you think interest rates are made of? Banks pay interest commensurate with what they can charge borrowers. No stealing involved.

“Socialists ought to welcome the ability for workers to acquire the means of production [and] become part owners of the businesses they labor in.”

And another: “Remember that the federal government, as well as the state governments, the counties, the cities and all the overleveraged businesses, would all quickly go bankrupt if the interest rates on their trillions of debt were much over 1%.

“And the federal government debt ($22.5 trillion) was accumulated by taxpayers wanting bigger and bigger Social Security and Medicare payouts (around 40% of the federal budget). The older folks lose on bank interest, but they made up for it in government spending on their demographic group.”

The 5: Ah, but don’t forget the flip side — lower returns on government pension funds.

CalPERS, the giant plan for state workers in California, is only about 70% funded. And a good chunk of that shortfall can be chalked up to poor returns on its fixed-income investments.

Rest assured taxpayers will be expected to make up some of that difference, eventually. (You can see how well or poorly your state is faring in our July 25 episode of The 5.)

But there’s a much larger point: Interest rates are the most important prices in a market economy. Why should a small coterie of people in Washington, D.C., have the authority to fix those prices?

“Not paranoid enough!” seems to be the consensus after our musings at the end of yesterday’s episode about hackers or governments hijacking the app that controls the locks to “high-tech” cars like Teslas.

“I'm all for the internet of things,” writes one reader, “but not in cars. I use a key to unlock my car. No appetite for vehicles controlled by apps. Or driverless cars — I'd rather be pulled by a horse-drawn wagon than ride in one of those.”

“Imagine it’s Election Day,” says another. “A particular national race is very close and AI-enhanced pollsters have identified several hundred precincts that could make the difference in key states to dictate the election.

“Rather than manufacture a Russian collusion fable, wouldn’t it be easier to simply cross-reference party affiliation with car registration, then deactivate the cars of voters in these key precincts who are likely to vote for the opposition?

“Of course, when Google implements its ‘social credit score’ here in the U.S., then voting becomes irrelevant. By then all candidates will have met Google’s minimum approved score, or else they couldn’t even open a campaign bank account, campaign website or PO box.”

The 5: A PO box?! Isn’t it just privacy-obsessed paranoiacs who use those anymore?

P.S. America’s No. 1 retirement research specialist is doing the almost-impossible.

Case Study No. 245: A couple from Georgia is getting an extra $286,320 (calculated for 20 years of retirement) in lifetime benefits.