Might we suggest the film franchise that revels in the bad-luck day — the one with hockey mask-wearing psychopath Jason Voorhees?

[Full disclosure: While I love movies, I have no time for the horror genre. I watched a couple Nightmare on Elm Street iterations at a sleepover when I was in fifth grade. That was plenty.

Why not turn on the lights?

Why go down to the basement to check out that suspicious noise?

And why — just why — venture into the woods alone? At night?]

If you, unlike me, actually enjoy spine-tingling slashers, the Friday the 13th franchise has 12 movies to keep you in jumpscares all weekend.

And if you watch, think about this offbeat theory about the horror films…

“Outside of super-slashy Jason Voorhees, the second-most-prominent presence in the Friday the 13th films would be marijuana,” says an article at The Fresh Toast.

In fact: “A fun trend to watch throughout the numerous films is noticing how characters refer to marijuana.” 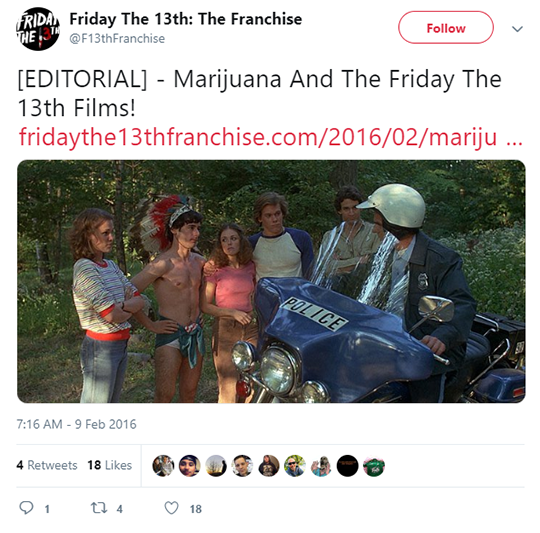 Did that kid escape from the Village People? And, yes, that’s a young Kevin Bacon.

… with the insinuation that anti-hero Jason Voorhees is a guerilla pot farmer?! And all he really wants is for meddlesome kids to: Leave. His crop. Alone!

The article theorizes: “Did Jason Voorhees anticipate the Green Rush and preemptively started growing….?” Something to think about.

“I want to invest in cannabis,” says a reader named Lucy. “Can you guide me through how to do it, please?”

Although there’s been much buzz around the marijuana industry (inexcusable, I know), it still seems like uncharted territory for most Main Street investors.

So perhaps you share Lucy’s sentiment when it comes to the fledgling marijuana industry; after all, the North American Marijuana Index — that tracks major cannabis companies operating in Canada and the U.S. — has only been around since early 2017.

So for Lucy — and others like her — our pot stock authority Ray Blanco says: “With some easy-to-follow steps you’ll be armed with all you need to know to start on your own path to marijuana-fueled riches.”

First, because of their volatility, Ray says under no circumstances should you bet the farm on cannabis stocks. Instead, if you have a little money set aside to take a flyer, by all means, give pot stocks a shot.

Furthermore, Ray says: “You should keep your positions small — no more than 2% of the money you have set aside for trading should be used on any one trade.”

Two absolute musts when it comes to buying pot stocks?:

Tracking Pot Stocks: “There are plenty of easy ways you can track pot stocks,” Ray says.

If you’re a complete newbie to trading and don’t have a broker, you can go to YahooFinance.com and create a free account. “Once you’ve created your account,” says Ray, “you can create a watchlist to track all the stocks you want.”

Or “if you have a broker,” says Ray, “you will have an option to build a watchlist of stocks you’ve purchased or are interested in purchasing right on the brokerage website.”

Exploring Pot Stocks: As you create your watchlist, what should you be looking for in cannabis companies?

“There are plenty of [cannabis] stocks out there,” says Ray. “But only a small handful are developing innovative products and services that could take their brand (and their stock) to the next level.

“These companies must boast a portfolio of unique offerings that have a superior chance of disrupting industries and gaining market share.

“The business must also be easy to understand,” Ray says. “If investors can’t grasp what a company is doing to make money, how enthusiastic will they be to buy shares?”

Timing Your Sells: To maximize gains and minimize losses, Ray says, you must “time… exits as perfectly as possible.”

Keep in mind: “The stock market is not a rational beast…. That’s especially true when it comes to smaller, more volatile stocks.

“That’s why you need to have a predetermined sell price figured out ahead of time when you make a buy.”

Ray says: “A good rule of thumb for stocks is to take gains until you earn your initial stake back.

Typically a 100% gain. Then sell half your position and let the house money ride.

“For pot stocks, considering the fast action, pulling in a 25–50% gain before selling half is advisable if you want to be more defensive.”

Ray concludes: “Here’s the simple truth: If you don’t know where and how to buy pot stocks, you can’t make money off them.”

So it doesn’t hurt to have some next-level guidance from an expert. Click here to get started today.

Back in July, Greg noted Walmart’s CEO Doug McMillon gave a tip-of-the-cap to Amazon’s ingenuity and customer-centric focus… but that didn’t mean Walmart was throwing in the towel.

Walmart’s subscription service — Delivery Unlimited — includes limitless grocery deliveries with availability in about half the U.S. by the end of the year.

“The old-school brick-and-mortar chain is even beating Amazon in some areas,” Greg says. Particularly at the market in 2019… 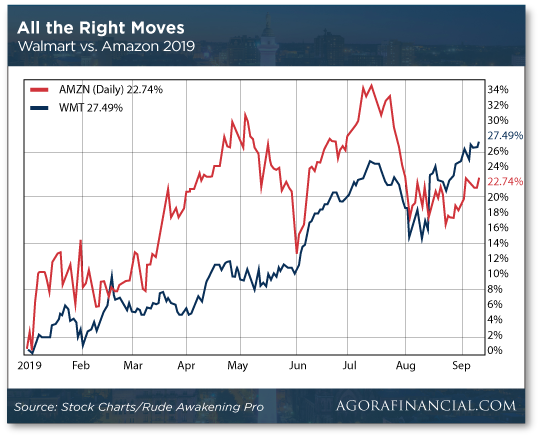 Not that we should minimize the “evil space-lord” — as Greg refers to Jeff Bezos — or the largest online retailer in the world, Amazon. “Just ask every retail store attached to a mall,” Greg concludes.

Which leads to the next item on the agenda: retail sales. The Commerce Department reports a seasonally adjusted increase of 0.4% in August. A retail “beat” taking into account analysts’ expected a 0.1% increase.

Did we mention auto sales? Because without car sales factored in, sales at traditional stores and restaurants were in decline.

At showrooms across the country, auto sales jumped 1.8% in August — the largest increase in five months.

In its best effort to allay fears of an impending bust, MarketWatch says: “The relatively robust level of car sales suggests consumers are still confident in the economy.

“Purchases of big-ticket items usually wane when the economy slows or Americans become worried about their jobs.”

Connecting those dots… but are they the right dots to connect? (Just throwin’ it out there.)

Following up on Hong Kong’s bid to buy the London Stock Exchange for $37 billion, the institution founded in 1571 said a very cool — albeit unerringly polite — “No, thank you.”

Two J.P. Morgan metal-trading bros have been placed on administrative leave amidst a criminal investigation.

“Michael Nowak and Gregg Smith are on leave,” says Reuters, “making them the third and fourth J.P. Morgan employees to be connected to the criminal investigation that has resulted in guilty pleas from two former J.P. Morgan metals traders.”

While Mr. Smith is pretty unremarkable, “Nowak is a managing director and global head of base and precious metals trading in New York for the bank,” Reuters says. In other words, he probably has a key to the C-suite restroom…

J.P. Morgan says it’s cooperating with authorities — yada, yada — including the DOJ, as they look into suspicious metals trading practices.

One such practice is “spoofing,” whereby traders place buy and sell bids with the intention of cancelling them before the bids are executed. The result? Creating the pretense of demand and, in turn, pumping up the prices of metals.

A December 2018 class action claims Nowak and others “made hundreds of spoof orders or more as ‘part of a conspiracy’ with the bank.”

Of course, readers of The 5 are already awake to dodgy practices at Dimon’s mega bank… and the ensuing fall guys.

“The move is scheduled for March 31,” according to Bloomberg, “and employees [of Icahn Enterprises] who don’t do so won’t have a job…” Alrighty then.

[Allegedly, a memo was sent around to employees letting them know — if they don’t make the move to Florida — the hedge fund won’t contest their unemployment claims.

Isn’t that just another way of saying: “Don’t let the door hit ya on the way out”?]

The reason Uncle Carl — who sounds like an absolute sweetheart — is making the move to Miami is for the tax advantages.

“Florida is one of seven states without a personal income tax,” Bloomberg notes, “while New York’s top rate is 8.82%. Florida’s corporate tax rate is 5.5%, compared with 6.5% in New York.

“The difference could mean dramatic savings for Icahn, who is the world’s 47th richest person, with a personal wealth of $20.4 billion, according to the Bloomberg Billionaires Index.”

Just what we were all hoping for: “dramatic savings” for billionaires.

“I live an hour and a half drive from Toronto (assuming the traffic stars align) in a town of roughly 150,000,” says a reader in Ontario regarding the sky-high cost of real estate.

“Our tiny little house has seen its market value increase at least 60% in nine years. I haven't calculated recently, but I know our property taxes have outpaced inflation by an equally disturbing rate.

“And now the federal government is helping first-time homebuyers by taking an equity stake in the house… Talk about ripple effect and bad ideas.”

More on the case for P.O. Boxes: “We live and operate (and have for decades) in Colorado, Wyoming, Kansas, Nebraska and South Dakota.

“Virtually ALL the areas we live in, including towns of 500–1,000 people, have NEVER had door-to-door mail delivery. A post office box (now costing $100 or more per year, rent paid to the USPS) is essential: Very few post offices have ‘general delivery’ allowed at all.

“And even though some rural and frontier areas DO have delivery to mailboxes (which are sometimes five–10 miles away from the actual ranch headquarters or farmstead (or mine or plant), there are other problems: theft and vandalism.”

The 5: You mean crime isn’t just a big-city problem?

We recently put together a full, step-by-step guide to making money with pot stocks…

And now we’d like to send it to you for FREE.

Click here for details on how to claim it.