After a few days’ respite, stocks are once again selling off.

As always, the financial media seek easy explanations for moves like these. “Trade tensions” appear to be the go-to answer today: “Chinese officials signaled they’re increasingly reluctant to agree to a broad trade deal with the U.S. ahead of negotiations this week,” says Bloomberg.

As always, the reality is more complex — and more interesting.

But first, we’ll pose the question: Is it time to panic? After all, the S&P 500 is down more than 4% from its record close — which is now more than two months in the rearview.

Not according to a powerful indicator of market sentiment used by our resident chart hound Greg Guenthner.

By the same token, it’s not screaming “buy,” either. “Sentiment has flatlined,” Greg says, “following a couple of tumultuous trading months.

“The major averages aren’t showing their cards despite remaining just below all-time highs. Investors might be getting weary of the political and economic drama, as evidenced by two recent sharp pullbacks.”

What follows is a two-part chart going back to 2017. We’ll first direct your attention to the top part and the two pullbacks in SPY — the big S&P 500 ETF — since the start of the summer. 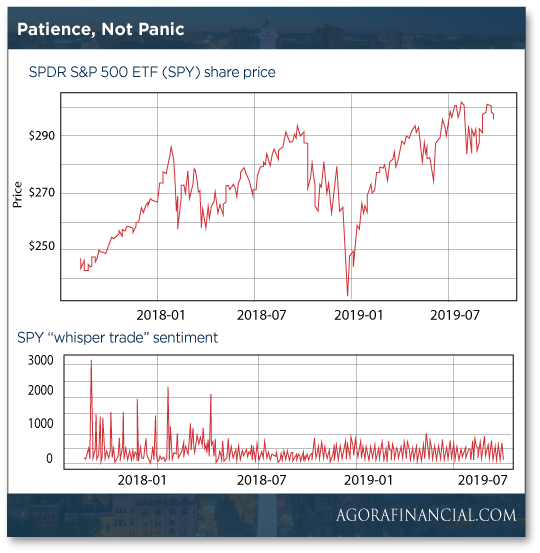 It’s the second part of the chart with the truly revealing information.

It’s a one-of-a-kind tool that uncovers market sentiment well beneath the surface — “whisper trades,” you might call them. (You can see a demo here, courtesy of Greg’s publisher.)

Alas, there’s nothing showing up like that now. “We haven’t seen anything resembling the bullish spikes of 2017 and early 2018,” Greg says.

“But don’t throw in the towel on this market just yet. I still think this lack of enthusiasm might turn into a good thing. Despite the sharp pullbacks we’ve experienced, no major trends have fallen apart. If stocks continue to rebound, we could see a big push into stocks (and a series of fresh bullish sentiment spikes) before the holiday season.”

That said, the indicator is lighting up on several individual stocks. Previous spikes have delivered staggering gains like 933% on Progressive Corp.… 1,097% on Micron Technology… and 1,166% on Intel. And all of those “whisper trades” played out in less than three months — in the case of Intel, less than two weeks!

You can put these “whisper trades” to work in your own portfolio — but you’d better get cracking. Greg’s publisher has an extraordinary offer to make… but for reasons you’ll see when you click here, the offer comes off the table at midnight tonight.

OK, back to the trade war. Forget about handicapping the talks: The big story, it seems to us, is the U.S. government blacklisting 28 Chinese companies and government agencies.

They’ve been added to the so-called “Entity List” — which means they can no longer buy goods and services from U.S. firms without Washington’s approval. Among the U.S. firms most affected — Intel (down 1.2% as we write) and Nvidia (down a solid 3.75%).

The Trump administration claims the 28 “entities” are involved in Beijing’s oppression of China’s ethnic Uighurs — a Muslim population concentrated in the northwestern province of Xinjiang. By some accounts, as many as 1 million Uighurs have been sent to detention camps that Beijing describes as “vocational training centers.”

We have no doubt nasty things are going down in Xinjiang. But the bad faith by the China-bashers in the United States is brazen: These are people who ordinarily don’t give a fig about the plight of Muslim peoples anywhere in the world — unless their plight can be used as a cudgel against one of Washington’s official enemies. (The Chechen Muslims of Russia are used just as cynically.)

Even one of the president’s staunchest supporters says tariff uncertainty is a drag on global economic growth.

David Malpass was an economic adviser to the 2016 Trump campaign and worked at the Treasury Department after the election. Earlier this year, Trump named him president of the World Bank (a position that traditionally goes to an American, while a European gets to run the International Monetary Fund).

Meanwhile, the trade war is weighing on small business.

The National Federation of Independent Business is out this morning with its monthly Optimism Index. The headline number is still strong by historical standards at 101.8, and few survey respondents are worried about an imminent recession.

But 30% of respondents report negative effects of tariffs — significant because the NFIB is (at the risk of generalizing) a Republican-leaning organization.

Another factor weighing on the stock market — the big economic number of the day went “clank.”

Wholesale prices tumbled 0.3% in September, an outcome literally no one expected among dozens of economists polled by Econoday. (The average guess was a 0.1% increase.)

It’s another sign the Federal Reserve just can’t generate the level of inflation it wants. Tomorrow we get the consumer price index; if it delivers a similar surprise, chances of another Fed interest rate cut at the end of the month will leap even higher than they are now. Trade this morning in fed funds futures points to an 82% probability of a cut at the next Fed meeting on Oct. 30.

Now to the economic-warfare aspect of the latest Middle East mess.

When we left you yesterday, the Trump administration had said it wouldn’t put U.S. troops in the way of Turkey’s plans to send troops into northern Syria to crush the ethnic Kurds there.

The bipartisan foreign-policy consensus in Washington promptly freaked out because God forbid American troops not be involved in every conflict, all over the world, at all times. Senate Majority Leader Mitch McConnell (R-Kentucky) and Rep. Ilhan Omar (D-Minnesota) sang from the same choirbook about how the move would benefit ISIS, Iran and Russia.

We have yet to see anyone offer a cogent explanation for how Iran and Russia benefit. As for ISIS, Pat Buchanan rightly asks in his latest column: “Al-Qaida and ISIS are in many more places today than they were [before] we intervened in the Middle East. Must we fight forever over there — to be secure over here? Why cannot Syria, Iraq, Iran, Turkey, Saudi Arabia and the Gulf States deal with ISIS and al-Qaida in their own backyard?”

As the day wore on, the president lost his nerve. 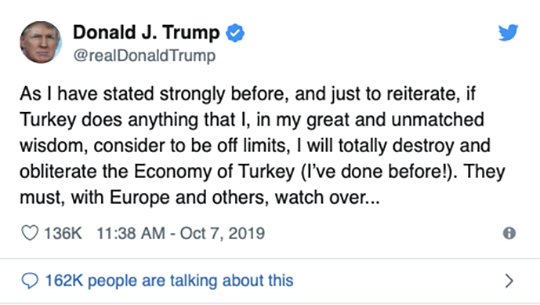 What exactly is “off limits”? Evidently, it’s up to Turkey’s leaders to guess… and hope they don’t do anything to bring down the hammer of U.S. sanctions.

Once again, Washington wields its might as “the economic policeman of the planet” — to use the words of the French finance minister. That was 18 months ago, when he was complaining about how the dollar’s dominance in global transactions effectively dragged Europe into enforcing U.S. sanctions against Iran.

Here’s the problem: For some time now, Turkey has been looking to get out from under the dollar’s thumb — just like Iran, Russia and China. Our own Jim Rickards lumps all four countries into an “axis of gold.”

We doubt the president has any grasp on this. We know Mitch McConnell and Ilhan Omar don’t. If you’re not fully up to speed, here’s our write-up from the spring of 2018.

Stupid litigation tricks: A class-action lawsuit is citing an obscure Civil War-era law to squeeze money out of a major liquor producer.

It turns out Florida law forbids the addition of “grains of paradise” to any form of liquor “used or intended for drink.”

“Grains of paradise” is a spice closely related to cardamom. It’s included in Bombay Sapphire gin. A Miami lawyer is suing Bacardi, which makes the gin… and Winn-Dixie supermarkets, which sells it.

The law dates back to a time when all manner of poisonous substances like turpentine were being added to cheap gin. Why grains of paradise was included in the law has been lost to history. But the lawsuit cites the defendants as engaging in “deceptive and unfair trade practices.”

“The lawyer acknowledges there are no studies that he’s found that show a negative health effect of grains of paradise,” reports the Miami Herald, which had a long story about the suit last week. “But he says there needs to be more research done. For now, he advocates warning labels be put on bottles of Bombay.”

Either that, or Bacardi strokes him a nice big check to make it all go away, right?

To the mailbag, where politics rears its ugly head yet again.

“Every time you voice support and/or ignore the transgressions of that amoral, orange buffoon in the White House, you make me question why I take anything that you say seriously.”

We have no idea what brought this on. The email came in last week after we addressed the matter of how impeachment might affect the markets. (Not much, was our very down-the-middle assessment.)

We are revolted by politics and we do not take sides. And so when we must address politics in the course of addressing the economy and the markets, we get mail from both the “orange man bad” crowd as well as the faction that demands that we “get on board with your president.”

We encourage both sides to get a life.

That means there were 121,337,000 voting-age Americans — 48.5% of the total — who either 1) stayed home on Election Day, 2) voted third party or independent for president or 3) cast a ballot on Election Day but left the presidential part of the ballot blank.

At the time we documented how in California alone, nearly 700,000 people fell into either category 2 or 3. That’s the number of people who voted one way or the other on legalizing recreational cannabis and did not vote for either Trump or Clinton.

Subsequent figures analyzed by The Washington Post revealed 1.7 million people in 33 states and the District of Columbia fell into category 3. They showed up to vote… but couldn’t bring themselves to cast a vote for president.

So the next time you get wrapped up in some conflict or other over something this president did or said, just remember 48.5% of your fellow adult Americans don’t have a dog in the fight.

Go for a walk. Have a drink. Breathe. Whatever it takes to center yourself. You and your fellow citizens will both be better off.

P.S. A huge bombshell about our business recently surfaced online.

And because you actively follow our work, we figured you should hear about it from us — straight from the source.