As noted here yesterday, JPM kicked off earnings season on a high note with its quarterly numbers. But on the conference call that followed, Dimon warned about the ongoing risk of the trade war.

“Of course there’s a recession ahead,” he said, before unhelpfully adding, “What we don’t know is if it’s going to happen soon.” Thanks a lot, pal.

The Post story was accompanied by some bizarro artwork depicting Dimon as a fortune teller. Whatever their art department is smoking, we want some… 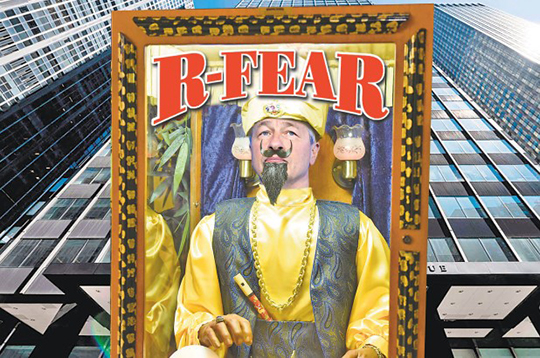 Anyway, Dimon went on to say, “It does look like geopolitics, particularly around China and trade, are reducing business confidence and business capital expenditure.” In contrast, “the consumer is not under strain. The consumer is doing fine.”

Or is the consumer doing fine? The Commerce Department stunk up the joint this morning with the September retail sales figures.

The number dropped 0.3%. Literally no one among dozens of economists polled by Econoday expected that outcome; the most pessimistic guess was a 0.1% increase.

It was the first monthly drop since February, and the numbers didn’t get any better after factoring out volatile auto sales and falling gasoline prices.

Still, one month never tells the whole story — especially since the August figure was revised up to a 0.6% jump.

Assuming a recession hasn’t started already — the wonks at the National Bureau of Economic Research never tell us until well after the fact — the current economic expansion is now 10 years and 3 months old.

In May, we posed the question, aren’t we just due? Aren’t all the signs there?

For one thing, there’s no accelerating inflation that marks the end of a boom and the start of a bust.

It’s not for lack of trying by the Federal Reserve. The Fed has conjured an abundance of new money into existence since the Panic of 2008. But most of that money has found its way into financial assets — especially stocks and real estate.

In contrast, consumer price inflation is (relatively) muted — and no matter how you measure it, the rate is lower now than it was six months ago.

That’s not how it usually works at an economic peak and the start of a recession.

Think back to late 2007–early 2008. Your cost of living was rising relentlessly — so much so that the Fed and other pillars of the Establishment tried to steer public focus onto the “core” inflation rate, a figure that excluded food and energy prices and just happened to be lower than the regular inflation rate. Here in The 5 we would periodically mock the core rate as inflation for people who don’t eat or commute.

Speaking of energy prices… nearly every recession is preceded or accompanied by a huge jump in oil. That’s not happening, either.

Now? Oil began rising steadily from $26 in February 2016. We fretted much of last year… all the way to the peak at $76 in October. But we haven’t come close since. Heck, for four years of this economic expansion, oil stayed above $80 — and we averted recession the whole time… 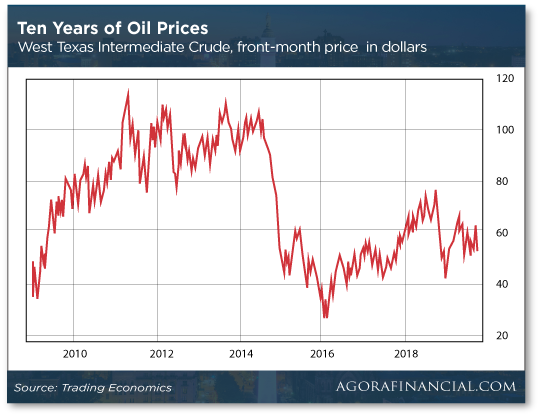 This morning a barrel of West Texas Intermediate fetches $53.49 — on the low end of a trading range that’s been in place all year.

And another thing: Where’s the bubble?

The end stage of an economic boom is usually accompanied by a glaring bubble, a euphoric mania, in a single asset class where the masses convince themselves trees grow to the sky. Think housing in 2004–06 or dot-com stocks in 1999–2000. Before the 1990–91 recession it was commercial real estate financed by the savings and loans.

But where’s that bubble now? We’ve had a handful of mini-manias in recent years — shale energy in 2014, cryptocurrencies in 2017 — but nothing that’s really stoked mass consciousness.

Cannabis stocks? True, they’re going through a shakeout, as we’ve discussed from time to time this year, but the sector is way too small to have a ripple effect on the rest of the economy.

A few analysts claim the existence of an “everything bubble,” but that’s just lazy. Whether it’s tulips in Holland in the 1630s or railroads in England in the 1840s, it’s always something specific that’s got everybody talking.

Besides, a large number of mom and pop investors are still sitting out the stock market, more than 10 years after it hit bottom.

At the peak of dot-com mania in early 2000, the Gallup pollsters determined 61% of American households had money in the stock market. Going into the 2007–09 “Great Recession,” the figure was 63%.

Heck, many of the mom and pops who did tiptoe into the market during recent years bailed during the summer.

Data from Morningstar find investors pulling $60 billion out of stock funds in the third quarter — an outflow last seen in 2009.

And yet this morning, the Dow trades only 1.3% below its record close in July.

“The negative news cycle that held the market hostage for the better part of the past two months is easing. Investors are through with trade wars, impeachment and Brexit for now. The focus is squarely on earnings and the push back toward new highs.”

And that’s despite the prospect of a “substantial phase one” trade deal between Washington and Beijing falling apart. Go figure…

The Federal Reserve conjured $87.7 billion into existence yesterday alone as it tries to shore up the “repo” market.

As a quick refresher, repos are short for “repurchase agreements” — overnight loans the big banks and hedge funds take out to fund their trading, putting up U.S. Treasuries as collateral. They’re lubricant for the financial system.

The repo market seized up a month ago and the Fed rushed to the rescue. Yesterday’s sizeable sum was a combination of the ongoing “liquidity injections” and the start of a new $60-billion-a-month program.

We’re still getting zip in the way of transparency: “The Fed is in some stage of panic over something that is not entirely clear,” says Chicago-area broker Bill King in his daily King Report, much followed in high-end financial circles.

Nor is the Fed disclosing which firms are benefiting from this newly created cash.

Once again — especially in light of everything else we’ve said today — we’ll emphasize that if a market panic ensues, that doesn’t guarantee a recession. Panics struck the markets in 1987, 1994 and 1998… and no recession followed.

With one arm of the federal government lowering the sanctions hammer on Turkey, another arm is getting nervous about the U.S. nukes there.

The giant Incirlik Air Base in Turkey is home to about 50 B61 gravity bombs.

“The presence of nuclear weapons at Incirlik, though never publicly confirmed or denied by the U.S. government, has long been essentially an open secret,” explains the Air Force Times.

“In an interview this summer with Air Force Times on the future of Incirlik amid rising tensions with Turkey, former Air Force Secretary Deborah Lee James would not confirm or deny the presence of nuclear weapons there. But hypothetically speaking, she said that if nuclear weapons did have to be removed from that base, it would be a complicated operation.

“It would require negotiations with the nation that would become the weapons’ new host, James said. And it would require a great deal of logistical and security work.”

If The New York Times is to be believed (a stretch, but play along with us here), the State and Energy Departments are now both reviewing plans to evacuate those nuclear weapons.

As one of those always-anonymous officials put it to the paper, the weapons “were now essentially [Turkish President Recep] Erdogan’s hostages.”

It’s not every day a business has to destroy $65 million of its inventory just to, well, stay in business. But that’s cannabis in Canada for you.

In July we told you how a former employee at CannTrust accused the company of having five unlicensed grow rooms, with false walls hiding thousands of cannabis plants. Inspectors swooped in and found exactly that.

The reaction was swift: The CEO was fired soon thereafter, and the firm lost its licenses to produce and sell cannabis last month.

Exactly how the destruction is supposed to proceed, we’re not sure. Really, are they going to burn it? And how would they keep the fumes from spreading and making the residents of Pelham, Ontario, really mellow?

In any event, CannTrust says, “The destruction process will allow the company to free up much-needed capacity to both implement remediation measures and store material that has been grown and processed in accordance with the company’s license since April 5, 2019.”

Heh… For what it’s worth, our penny pot stock authority Ray Blanco steered well clear of CannTrust ever since it began trading…

(Well, first, because it’s been a few days, here’s the picture again from 2008. Saves you the trouble of clicking to the back issue and scrolling down…) 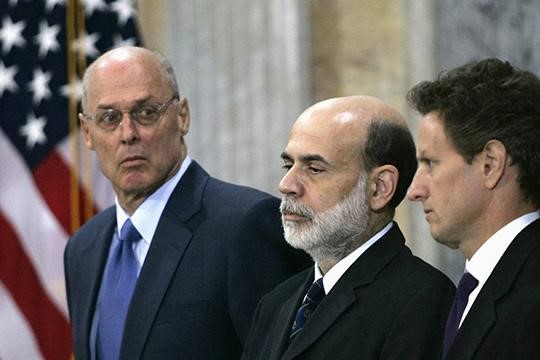 “How about Huey, Dewey and Louie?” a reader weighs in.

“Since I can never tell the difference between them, you can pick the order. Admittedly, the Three Stooges can create havoc, but the three nephews of Donald Duck are utterly clueless. Besides, that leaves open the question of the identity of Scrooge McDuck. I’d vote for Robert Rubin.”

Scrooge, in the very first issue of the Carl Barks comic from 1952, described how he attained his fortune: “I made it by being tougher than the toughies, and smarter than the smarties! And I made it square!”

Tune in at 7:00 p.m. EDT and you’ll learn, among other things, how a new dot-com boom is set to start next year. He’ll also reveal (absolutely FREE) the name and ticker symbol of his favorite “cryptocosm” stock.

Just add this event to your calendar now and you’ll be all set: Here’s the Google calendar link and here’s the iCal/Outlook link.