“Mark my words: The trade war is over,” said the email from Alan Knuckman — our eyes and ears in the Chicago options trading pits.

We were caught off-guard. Alan’s mostly a chart guy. He doesn’t make big predictions in the realm of politics and policy.

What’s more, only yesterday the stock market tanked on a report that Chinese leaders are worried about Donald Trump’s “impulsive” nature… and that he might back out of signing an early-stage trade deal this month.

But… “Last week a huge anomaly hit the market,” says Alan. “And our indicator caught it.”

Now that caught my attention… because I’ve become mighty familiar with this indicator in recent months.

But I’m getting ahead of myself….

According to this indicator, well-connected insiders are piling into a trade that will pay off big once there’s a done deal between Washington and Beijing later this month.

“Wall Street is still holding its breath waiting for any substantial news,” says Alan. “But those familiar with the matter know how close we are to inking a deal… And you better believe they’re going to make money off it if they can.

“These insiders are tricky, though; they don’t want to risk tipping off the rest of the market. Especially when it comes to huge matters like a U.S.-China trade deal.

“So instead of buying up stock that can be easily spotted, they’re operating in the options market,” Alan explains.

“That’s because while regulators can easily spot individuals trading a large block of stock shares, they can easily miss the smaller amount of options needed to bank a massive gain.

“And the best news for us: My indicator tracks these moves in the options market, alerting me when there is any unusual buying activity concentrated on certain stock options.

“Their recent buys are a dead giveaway. Hundreds of thousands of call options. All in the past week alone,” Alan goes on.

“All concentrated in a handful of trades with the most to gain when a deal is finalized.”

As the name implies, this ETF focuses on emerging markets… and Chinese companies make up nearly one-third of its holdings. In fact, five of the top 10 holdings are Chinese firms.

While a trade deal would no doubt give U.S. stocks a lift, “the real winners will be Chinese stocks,” Alan explains. “The U.S. is China’s biggest trade partner, after all. Therefore, the best way to profit from a deal is to get into those Chinese stocks.

“ETFs track the moves of a collection of stocks and are more prone to gain from trends instead of individual company news.”

But here’s the key: “While an ETF might make a 5% move in a year, its options could triple that return in less than a month,” Alan says.

“So if you knew that a deal was coming, Chinese ETF options would be the best place to secretly set yourself up for major profits when a deal is announced.”

Which is exactly what’s happening with EEM. The top part of this chart shows EEM’s price going back to last spring. The bottom part is our proprietary indicator… 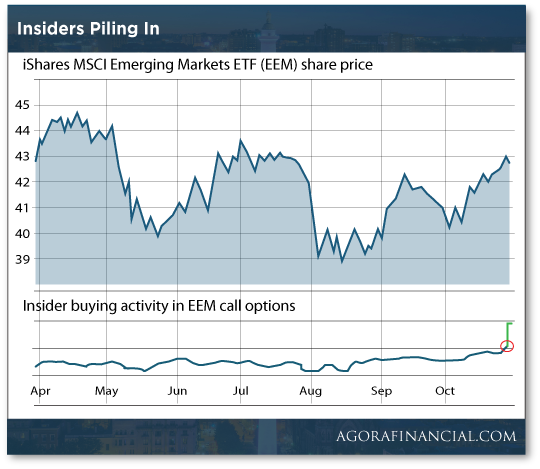 Let’s explain what’s so significant about that spike on the bottom section: “On Tuesday,” says Alan, “one trader — most likely someone with inside trade deal information — bought $1.5 million worth of EEM December 2019 $44 call options.

“This means somebody fully believes EEM will climb higher than $44 by next month… It’s the only way they can profit.

“In fact, they don’t just believe, they know. Because if they’re wrong, they lose it all when the call options expire next month. And you don’t just bet $1.5 million unless you know you’re going to win.”

What’s more, this wasn’t the only big purchase signaling an imminent trade deal.

Bottom line: “The smart money is betting big on China, confident a surge is imminent,” Alan concludes. “And now there’s no need to wait for the announcement later this month. In fact, that would be the worst thing to do.

“If you delay, you risk getting in after the pop and lowering your profit potential.

“So before that happens, consider checking out the ETFs with unusual activity — EEM, FXI, CHAU, KWEB or YINN.”

[Ed. note: About this indicator I mentioned — four months ago, Alan and I partnered up on a new trading service that puts this powerful tool to work for a select group of readers.

Our next trade recommendation will come out on Tuesday. If you want to learn more about how this indicator works — and how it could give your portfolio a major boost before 2019 is over — you’ll want to give this a look right away.]

Go figure: A mediocre jobs report is powering the S&P 500 into record territory.

Going into this morning’s release of the monthly job numbers, the “expert consensus” among dozens of economists polled by Econoday was for only 90,000 new jobs in October.

But it turns out the wonks at the Bureau of Labor Statistics conjured 128,000 new jobs. And the September and August numbers were revised up.

With the new-jobs number clearing that very low bar, traders have donned their rally caps.

Today’s rally comes in spite of the other big economic number of the day — which is a big disappointment.

The ISM manufacturing index for October clocks in at 48.3. It’s the third-straight sub-50 reading — which indicates a shrinking factory sector. It’s also lower than the so-called experts were counting on.

The only saving grace is that the number’s up from the month before… and export orders are growing.

If China is leapfrogging the United States in 5G wireless technology, blame it on America’s military-industrial complex.

For the moment, China is playing catch-up to America when it comes to the rollout of this new, speedier and more reliable mobile data technology. All four of the big U.S. providers have been up and running — at least in major city centers — for months now.

“But while American wireless carriers are leading in early deployment of the technology,” says The Wall Street Journal, “some telecom-industry leaders say Beijing is poised to vault ahead in coming months. While U.S. wireless carriers shuffle from city to city to introduce 5G, China plans to blanket urban areas with it by the end of next year and the rest of the country soon after.” 5G has been a huge priority for the Communist Party leadership.

China has opted to build out most of its 5G network in the midband spectrum. Key point: Its performance won’t be as good as the high-band, but it can be done on the cheap — using existing 4G infrastructure.

For the most part, American providers don’t have that option. Why? “The U.S. government owns very large portions of the sub-6 GHz spectrum,” George Gilder tells us — “and they’re very jealous of it, reserving it for defense and intelligence purposes… So right out of the gate, the U.S. has got one hand tied behind its back.

“Even though, from an ideal performance standpoint, sub-6 GHz 5G is demonstrably inferior to its high-band incarnation, it is likely to become the global standard — and with China firmly ensconced in the lead.”

Now you know. Still, George reminds us, “Wherever there are problems, there are opportunities.” He’s scouting around for tiny companies with moonshot potential to overcome these 5G challenges.

“I suggest you have a contest for the best solution to our national disunity problem — a solution that could circumvent a civil war,” a reader writes as the “taker states” issue flares up again in the mailbag.

“Let us keep in mind 1% casualties equals 3.27 million people. We could have that in six months if elderly people are deprived of their medications through distribution disruptions. If one begins to fathom the destruction of communications and infrastructure, it becomes very frightening.

“There has to be a better way. It is imperative we search for solutions now, even if it never gets this far.”

The 5: Reading how some people are trying to cope with the planned power outages in California this week has been a sobering experience… and a taste of what could happen in a worst-case scenario, no?

The Los Angeles Times reports from Lake County, “which shares a border with Napa County but lacks its wealth… Gas tanks were siphoned, generators ‘are like diamonds,’ said one resident. Cellphones are still sporadic; news remains mostly word of mouth.

“When deep darkness took over by 7 p.m. in the scattered towns around Clear Lake, the largest freshwater lake in the state, there was a ‘tension in the air,’ said resident Susan Blunt, a feeling that although a threat may not be imminent, sunset held a primal menace. The sheriff declared a state of emergency, citing ‘conditions of extreme peril.’”

“For me, it isn't just [due to] resentments against fellow Americans that I took the decision to be an expat,” writes our final correspondent.

“It's about the rampant cost of living (in spite of low inflation numbers by the government), the traffic nightmare that most have to traverse each day, the air/water pollution getting worse each day and finally the financial house of cards the U.S. created built on fiat money that's popped into existence by the Fed, all discussed here regularly.

“So after the 2000 recession, I opted out of the labor market and moved to Costa Rica, the land of ‘pura vida.’ Here politics are tranquil, the air and water are clean and clear, there's very little traffic, the people are friendly and taxes are low (outside of the Central Valley area where 70% of the population live).

“I still have my investments in the U.S. generating income, but don't have to be concerned about a revolution in my neighborhood.”

The 5: Don’t forget Costa Rica has had no standing army since 1948.

If memory serves, there were some old dudes around the time of the United States’ founding who warned that a professional military maintained in peacetime would become a source of trouble down the line…

P.S. A point of nuance: While our proprietary options-market indicator points to a signed U.S.-China trade deal later this month… we remain doubtful it will end the trade war for good.

It will be a temporary truce, not a lasting peace.

Still… as we’ve shown you today, developments like these can serve up lucrative trading opportunities.

In fact, there’s one that’s on our radar for early next week, and it’ll pay to act no later than Monday — as I’ll show you when you click here.