Compliments of the IRS, a new Form W-4 for 2020 will make calculating how much taxes to withhold from your paycheck that much more of a headache.

The form — hot off the presses last week — is longer and eliminates certain allowances. (In fact, the word “allowances” has been removed from the form altogether.) Plus, you’ll have to take a deeper dive into your 2019 taxes to complete it. 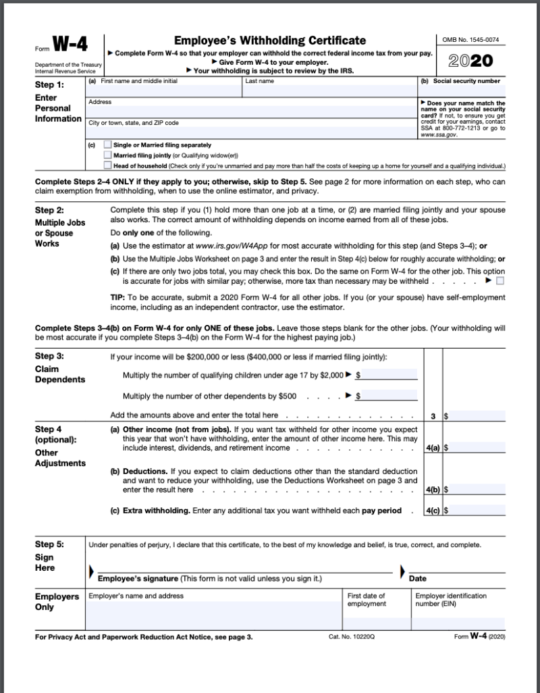 Those who won’t need to fill out a new W-4? Workers whose tax status didn’t budge in 2019. But if you’re new to a job or had a major life event this year (gotten married, had a child, etc.), you’ll need to submit a new form.

“It used to be a 30-second exercise,” says Pete Isberg, vice president at payroll company ADP. “I expect now many folks will have to dial home and ask someone to look up last year’s tax returns.” Fun!

According to Isberg, however, the new form should be “vastly easier” for working married couples, provided they follow the instructions.

“Gone is the messy and difficult nine-step worksheet to figure out how much each couple should withhold from their individual paychecks,” says Yahoo Finance.

“Now, married working couples only need to check a box to indicate that they both have jobs and the correct withholdings will be calculated for them.”

Easy-peasy? Not so fast…

The potential land mines come in Steps 3 and 4. “If a couple checks the working box, only the highest-earning spouse should fill out Steps 3 and 4, which asks for dependents, additional income, deductions and extra withholdings.” (Emphasis added.)

So here’s where things get tricky: If both working spouses fill out Step 4 — “extra income” — the government will take a bigger cut from your paychecks. And if both spouses fill out deductions or dependents, you’ll wind up owing the IRS.

Of course, you’ve got to nail your W-4 to hit the sweet spot: Not owing the IRS anything and not getting a refund check signed by Uncle Sam.

[Ed. note: As we approach the end of the year, it’s time to think about filing your income taxes. To get you started, Robert Kiyosaki and his team have gotten a jump with the Rich Dad 2020 Tax Guide… that’s loaded with tips and tricks to help you legally reduce your tax burden.

And it’s ready to download now. Sure, we understand you’re busy with holiday preparations, but if you take advantage of this offer today, you’ll have a leg up come tax-filing time. Take a minute to check it out now — there’s no long video to watch.]

According to WSJ, U.S. and Chinese trade negotiators are “laying the groundwork” to push back new tariffs set to go into effect Dec. 15. Riiight…

And the markets remain remarkably unruffled. (Someone must have gotten a clue that trade-war histrionics shouldn’t juke the market.)

Onto the big economic number today…

The National Federation of Independent Business is out with its monthly Optimism Index. It posted the biggest month-over-month gain since May 2018, jumping 2.3 points to 104.7 in November.

“This historic run may defy the expectations of many, but it comes as no surprise to small-business owners who understand what a supportive tax and regulatory environment can do for their companies,” NFIB chief economist William Dunkelberg says.

“As the two-year anniversary of the Tax Cuts and Jobs Act’s passage approaches this month, small businesses, the world’s third-largest economy, are using those savings to power the American economy,” Mr. Dunkelberg concludes.

Good help is still hard to find, however, with 26% of surveyed small-business owners citing this as their primary concern.

Since the Uber IPO’s lockup period expired on Nov. 6, Kalanick has sold about $1.8 billion worth of Uber shares.

Most recently, on a three-day selling streak — including Black Friday — the company founder sold roughly 3.2 million shares, according to an SEC filing. (We don’t think he understands how Black Friday works.)

The well’s not dry, however; Kalanick still owns more than 33 million Uber shares, or roughly 2% of Uber’s outstanding shares.

Good thing, too. More to invest in his next startup called CloudKitchens, “a firm that rents commercial space and renovates it into leasable kitchens for delivery-only restaurants,” says Business Insider.

From the land that gave us Ace of Base *nod to all you Gen-Xers* and socialism Scandy-style, we learn Sweden has one of the highest counts of billionaires in the world.

According to an article at The Economist: “Sweden has one billionaire for every 250,000 people, one of the highest rates in the world. It is also one of the world’s most unequal countries in terms of the distribution of wealth.” (Emphasis added.)

The Economist estimates the wealth of Sweden’s billionaires is equal to one-quarter of the country’s annual GDP. “Only in tax havens such as Cyprus or Monaco, or captured economies such as Russia or Georgia, are plutocrats more dominant,” the article says.

Ordinary Swedes are surprisingly complacent about wealth disparity; in fact, billionaires are celebrated alongside national treasures Abba and Bjorn Börg. (Abba’s iffy… but whatever floats your boat.)

And the thought of stringent wealth taxes is met with indifference in Sweden. Mostly, because they’ve been there, done that.

“Combined with heavy taxation of income, the effective tax rate on investment exceeded 100% in some cases,” The Economist says.

Despite levying burdensome taxes, it barely moved the needle for Sweden’s economy — raising the GDP 0.4%. And the upshot was billionaires pulled up stakes, taking their businesses elsewhere.

By 2007, with bipartisan support, Sweden abolished its wealth tax. With that, prodigal billionaires living in exile returned to be feted by their socialist fellow Swedes.

Hmm… We wonder if Bernie and Warren are cognizant of how the wealth tax played out in the socialist paradise?

Legal weed is a hot commodity in the Motor City and its environs: “In the first eight days of legal weed sales, $1.6 million of recreational marijuana was sold at the five retail shops open around the state,” the Detroit Free Press reports.

And three of the five stores almost sold out of wares after their doors opened Dec. 1.

“The sales come just over a year after Michigan voters approved a ballot measure that legalized marijuana use, possession, growing and sales by a 56-44% margin. Michigan became the 10th state in the nation to legalize weed for adult recreational use,” The Detroit Free Press says.

“The state began accepting applications for recreational marijuana business licenses on Nov. 1 and has since awarded 21 licenses and pre-qualified another 73 applications.”

Here’s the fly in the (CBD?) ointment: About 1,400 of the state’s 1,771 townships aren’t welcoming marijuana businesses in their city limits. A case of “not in my backyard.”

The article concludes: “Many cities are holding off while local leaders develop ordinances that will govern marijuana businesses and… deciding which businesses will be allowed in.”

California all over again? We’ll keep you posted…

Because authorities in North Carolina have solved all other problems, they’re turning their attention to… holiday-inspired beer cans?

The 5’s been covering the beer can beat for almost a year now. From an unintended consequence of the last government shutdown — no desk jockeys at the Alcohol and Tobacco Tax and Trade Bureau (TTB) approving new beer labels — to a trademark showdown in New Orleans between Huge Ass Beer and Giant Ass Beer. We thought we’d covered it all.

North Carolina-based Sycamore Brewery had to pull cans of seasonal beer from their shelves after a patron (er… narc?) complained to the North Carolina Alcohol Beverage Control Commission. 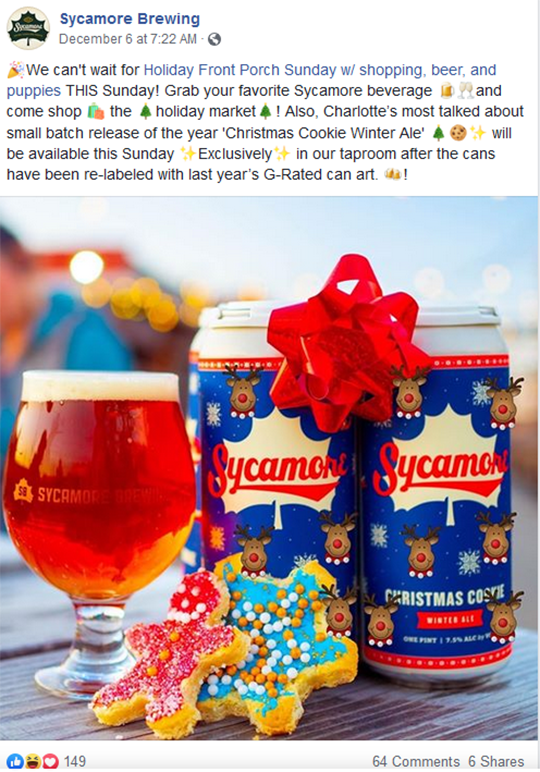 The upshot? All cans of the brew had to be re-labeled. Hmm…

You get the idea.

“Since the reindeer design wasn’t going to be sold in wide distribution, Sycamore Brewing believed that they could get away with the risqué holiday design,” Fox News says.

Not so. Cans had to be “G-rated,” you know, for all the kiddos who frequent breweries.

A longtime reader weighs in on Dave’s episode of The 5 yesterday: “For folks who have the option of relocating, one strategy is to move to a state that doesn’t impose income tax on its citizens. Hence, there is no capital gains tax (at least at the state level) on precious metals.

“Of course, it would be better still to live in a state that has adopted a ‘legal tender act’ where gold and silver are recognized as money. But there is none.

“That’s kind of peculiar considering Article I, Section 10 of the U.S. Constitution states, ‘No State shall… make any Thing but gold and silver Coin a Tender in Payment of Debts.’ Such is life in the perverse world of central banks and fiat currencies.

“A few states have considered legislation along these lines. Unfortunately, such bills only get so far and then stall. It’s almost like politicians fear the banksters’ wrath — or something like that.

“I’m dreaming of a day when every state returns to its constitutional duty and once again treats precious metal coins and bullion as money. Our masters at the Fed wouldn’t like it very much, which IMHO is all the more reason we must push for it.”

That’s why he’s written the Rich Dad Tax Guide — updated for 2020. Here’s a small sample of what’s inside:

Go here to learn how you can claim your copy today. Don’t even think about preparing your taxes until you read it.