A Broken “Theory of Victory”

“We underestimated Russia, and Putin has put them back on the scene.”

Shortly after letting slip the phrase “new world order,” President Joe Biden left the U.S. to pay homage to the old world order. He’s in Brussels to meet with other NATO muckities, discussing ways to deal with Putin.

Assuming, of course, their ban on transactions backed by Russian gold fails. (“The gold is physical, about 2,300 metric tons worth about $150 billion, and is stored inside Russia,” our Jim Rickards explains. “So it can’t actually be frozen or seized at all.”)

Back in 1949, NATO was specifically created to counter the threat of the Soviet Union. Since 1991, there hasn’t been much of a need for the organization. Yet our “ride or die” treaty with the bulk of Europe remains intact 31 years after the Warsaw Pact fell apart.

Just a decade ago, policymakers were questioning whether Russia should be considered a threat. Former Secretary of State Madeleine Albright, who died yesterday, dismissed the idea as absurd in 2012… before changing her mind a few years later.

No doubt Biden and his peers will spend some time congratulating themselves for keeping the band together all this time. Russia’s actions prove NATO has been necessary all this time, right? Hmmm…

Byron King, my guest for today’s Session, was on the staff of the U.S. Chief of Naval Operations around the time the Soviet Union fell apart. Since then he’s witnessed NATO redefine its raison d’etre time and again… eventually self-justifying its way into a bloated, unsustainable bureaucracy.

During his tenure, Byron sat in on meetings with the Navy’s Soviet counterparts. While the U.S. claimed victory in the Cold War, Byron says, “that’s not how the Russians think about it.” Instead, he says, “they view it as the communist system outlived itself. It was time to transition to something else.”

In fact, the West’s assumption of victory in the Cold War may have helped fuel disillusionment for the Russian people. They thought “Americans were going to come in and really show how to run an economy with your big, full grocery stores and your cars and your roads and all this kind of stuff.”

What they got was Big Macs and Gucci bags. The subsequent lack of prosperity created a gateway for Vladimir Putin and the oligarchs to manhandle the “commanding heights” of the economy. The means and methods for producing raw materials and exploiting the country’s natural resources. The oligarchs sold the people on the idea that the West was out to get them… and only strong hands could restore the nation to its former glory.

Of course, the folks in Brussels won’t spend a moment considering how to win over Russian hearts and minds. Instead, they will be discussing new ways to weaponize the dollar, enforce new sanctions and imagine plausible deniability for reciprocating Russian violence.

They’re convening an emergency summit because “the US has embarrassed itself,” Sean Ring writes in The Rude Awakening this morning. “The UK closed its financial center to everyone but ESG investors, and Switzerland has given up its neutrality.” Sean continues:

Poland is itching for a fight; why, I’ll never know. Oh, it’s because they think they can trigger Article 5 and end Russia once and for all. Sweden has just abandoned its political neutrality to send weapons to Ukraine. For what? Does Sweden really think NATO will come to its aid if Russia attacks its weapons convoys? The virtue signaling is staggering; ludacris even.

Now the group assembled in Brussels needs a new “theory of victory.”

“What’s the theory of victory, here?” Byron asks incredulously. “That’s what the question we used to ask at the Naval War Colleges,” he explains. How will your actions convince a rival to give up their ambitions?

“The theory of victory is,” says Byron, “that we’re going to take things away from you…. and your rich buddies, and you’re not going to like it and so you’re going to change your behavior.”

It’s a familiar strategy with a dismal record of success. Byron asks, “have we ever truly changed somebody’s behavior with sanctions, who didn’t want to change anyhow?”

On the contrary, Byron believes sanctioning Russian trade will speed up an existing trend and push them closer to China, India and Saudi Arabia — an Eastern bloc of autocratic nations and a bipolar world. Already, Putin has kicked the U.S. dollar to the curb. He’s asking the world to pay for natural gas, titanium and nickel in rubles.

You can hear Byron’s complete thoughts — on NATO, Ukraine, natural resources and more — in today’s Session. 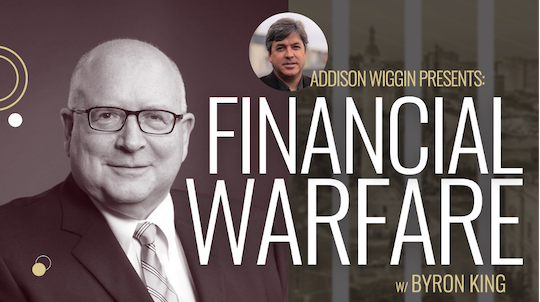 Get our full conversation with Byron King, here.

Just click on the pic above to view it.

P.S. “Hi Addison, first of all I’d just like to say I really like reading these Sessions,” writes Claudio C. “It and related newsletters have always been a breath of fresh air from the omnipresent idiocy I encounter, both from the media and in society in general.”

“Having said that,” uh ho, “I disagree from time to time and this is one of those times. This might be a bit long-winded so forgive me.”

We publish the remainder of Claudio’s long-winded response because he makes some good points contra Bitcoin in response to our Session with Dr. Saifedean Ammous. And because we want to encourage you to feel free to contribute whenever the spirit moves you. Take it away, sir:

I suppose I should start with the popular assumption that bitcoin is “the solution to everything”. While I may have agreed just a few years ago, after reading George Gilder’s excellent “Life after Google” (perhaps you’ve read it too?) a while ago, I no longer think that’s the case. As he says in the book, bitcoin is ultimately a deflationary currency due to its limited supply and thus cannot work in the long-term, even if the price stabilizes. I don’t know where Ammous got the bit about it growing at a 2% rate but it simply isn’t true. I don’t know the exact rate, but it used to grow much faster before the first halving, then as the term “halving” suggests, the supply of new bitcoin halved with each halving, and it’s halved three times so far. More than 90% of all bitcoin has already been mined so I think you can start to see the problem. One day, there simply won’t be enough bitcoin to support the huge world economy, even if we use a different currency based on bitcoin.

That’s the problem with using anything with a fixed supply as a standard, eventually you’ll run out of it and it needs to keep growing as long as the economy grows. Even gold isn’t totally fixed, it’s becoming harder to mine but there’s talk of mining new supply under the oceans or even on the moon and on asteroids. So I don’t think bitcoin or ether or any other crypto that currently exists can ultimately succeed as a currency. I think all the cryptos we have now are great for all the amazing DeFi innovation going on and are helping to popularize the idea, but it amazes me that after all this time, none of all the tech geeks working on DeFi seem to have a basic understanding of how currencies are supposed to work, much less someone like Ammous who obviously is very knowledgeable and understands economics.

The new “digital gold standard” simply doesn’t exist yet, but it might exist someday assuming someone actually bothers to create a stable crypto that keeps growing at around 2% like gold. Also, Gilder said it’s best not to use a currency that’s based on itself (like fiat money) so I’d like to build on that point and suggest something that I haven’t seen anyone else talk about as far as I know. Not only would you need to create a new crypto that keeps growing at a 2% rate, but I think you would also need to create another crypto that’s based on this new crypto at a fixed exchange rate like the gold standard. This second new crypto would act as the actual currency used in transactions based on this new crypto standard that would mimic gold, a true stablecoin and a new digital gold standard that can last.

And last but not least, Ammous’ remark that people can’t be easily controlled isn’t entirely true either, as history shows. Sure, a lot of people can’t but most can. Just look at the popularity of big govt and the increasing politicization of everything as the crazy woke ideology went mainstream. I’d also argue all the woke stuff is used as a “divide and conquer” tactic (and also a good distraction) by the elite but that’s a long story for another day.

Anyway, I hope all of this makes sense and keep up the good work!

Hmmn. We thought Dr. Ammous deftly explained the “halving” process and why Bitcoin is now growing at 2% per year at 38:10 in the video.

“The idea and intent of Bitcoin is great.” writes Irven H. a regular correspondent, also critical of the crypto-phenomenon. “But Bitcoin has a fatal flaw. It’s 100% dependent on the Internet and cannot exist outside of it. There hasn’t been an increasing call for Internet regulations and control for nothing. A CBDC won’t stand for competition very long. Cyber attacks, perhaps just the right cyber attack, at just the right time–whenever that is–would be just the trick to ‘regulate’ the Internet enough to render Bitcoin illegal.”

We share your concern. Again, Saif is convinced that since nobody controls Bitcoin, it cannot be rendered illegal either. He’s far more worried about the amount of control that would be exerted by a Central Bank Digital Currency (CBDC).