“The world breaks everyone and afterward many are strong at the broken places.”

“It’s perfectly obvious when you look around and see it,” James Howard Kunstler tells me. “And it is a gigantic epic, historic train wreck of economy, culture, politics, and expectations. And it’s kind of hard to take. I can take it because I’ve been thinking about it hard for about 30 years and I’ve been writing about it. And writing about it gives you the advantage of having to actually work these ideas out in some way that at least appears to be coherent. So I’m satisfied with my interpretation of what I’m seeing and the fact that an awful lot of people agree with me.”

Like I said, Jim is straight forward about the direction of our economy and culture. He’s not one to festoon the truth. He tells it the way he sees it. He is an author and social critic. Keep this in mind as you read his latest editorial that follows… — Enjoy, Addison.

“Clowns are the pegs on which the circus is hung”

Five-year-old children generally have no idea what adult sexuality is about….

America has an eating disorder — have you noticed? — and a touch of the old sexual dysphoria — am I a boy or a girl? — and has been caught in its room playing with razor blades. Ergo: America is a thirteen-year-old girl in need of some therapeutic assistance. Who will answer the call for help?

Here we are in the fat middle of Pride Month. Why is it, then, that the authorities have sent squadrons of drag queens out across the land like so many flying monkeys, flapping and shrieking from the candy-colored forests of Oz, to conduct “story hours” for children? Is America not sufficiently confused these days? Are drag queens really the best interlocutors for the doctrine of Diversity and Inclusion? Have we nothing better on offer to occupy childrens’ minds, say, learning to bake bread or build a bird-house? Practical skills they will need when the economy of Western Civ completes its disorienting descent out of Modern Times into the New Medieval?

Does anyone actually know what children think about a drag queen reading, say, My Princess Boy by Cheryl Kilodavis to a roomful of five-year-old boys and girls? I mean, apart from what the parents who take them there tell us their children think. (“They were enchanted!”) We know that the parents are pretending that this is a wholesome developmental exercise. And yet, let’s face it: is it not the whole point of being a drag queen to present a horrifying parody of an adult female human? Something like women-as-monsters?

Do any of the mommies who bring their children to the drag queen story hour present themselves in public as women the way the drag queens do? As, above all, sexually super-available? Would, say, the Palo Alto mommy of a five-year-old pause to twerk in the frozen food section of the supermarket on any given afternoon? In that context, what might be the reaction of other mommies shopping for hot pockets and Ben and Jerry’s Chubby Hubby?

Five-year-old children generally have no idea what adult sexuality is about. Should perhaps their first exposure to a realm so fraught and complex that many adults do not understand it be the presentation of women as monsters? And why are the mommies so avid for their children to be introduced to sexuality this way? Are some of the children perceptive and astute enough to suspect that drag queens on display are not really women? That, for instance, they might be… men? (A beard can be a give-away.) And might they take that thought a step or two further and ask themselves: why does this man want to pretend to be a monster-woman? Why doesn’t he want to be a daddy? Are mommies monsters? Can they turn into something like this when I’m not around? Are daddies who try to act like mommies monsters?

How exactly is a child supposed to process all of this? All on its own, without any inversions, distortions, and misconstructions, sex is difficult for some young humans to process. By the time they reach the threshold of puberty — say, age thirteen for girls — the onset of sexual development is so alarming that they attempt to starve their way out of it and cut themselves up.

Of course, we have not begun to probe what might animate a man to present himself to the world as a monstrous parody of a woman. Suffice it to say that such behavior suggests some complicated psychodynamics. And why, exactly, are they suddenly on-display so extravagantly now across the country, supposedly for the edification of children? I’ll tell you why: It’s not actually for the sake of the children. The children are just pawns in what is actually a national political psychodrama. Or rather, they are hostages.

What you’re seeing is the Party of Chaos sending a message to the rest of us — those who are not members of the Party of Chaos. The message is: we will take your children and destroy their minds, and pretend that it’s just another module of their education… and you will know, and we will know, and you will know that we know that this is just a malicious shuck-and-jive to humiliate you while we wreck the machinery of civilization, which we hate because it requires boundaries and norms to function.

And think of it: just days ago the FDA announced that it accepted Pfizer’s application for a Covid-19 vaccine for children between six months and five years old. That’s the same “safe and effective” vaccine they have been giving to the rest of you for over a year, which has produced adverse reactions and illnesses in rather striking numbers. Do you know why they did that? I’ll tell you why: to extend the emergency use authorization that shields Pfizer from legal liability for their mRNA vaccines. They are not content with wrecking civilization. They want to kill you and your children too.

P.S. If you haven’t watched my YouTube discussion with James (Jim) Howard Kunstler yet, I highly recommend this one. Just click below. 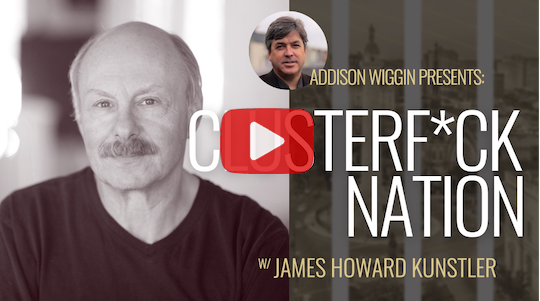