A Viennese Waltz Down Wall Street

“The stock market is more like a waltz, not a random walk,” according to Dr Mark Skousen, our guest this week on The Wiggin Sessions. (You can watch the full Episode 81: Forecasts, Strategies & FreedomFest 2023, here.) 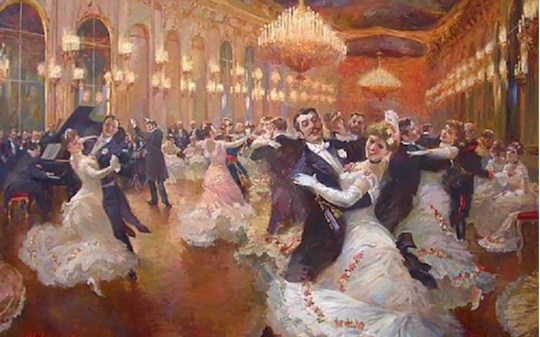 Mark has carried this metaphor throughout his long and prolific career in academia and on Wall Street. In 2013, we published his book titled “A Viennese Waltz Down Wall Street” under our imprint Laissez Faire Books.

Skousen’s thesis: The dance of profit and loss is one which all money earners and investors must learn to swing with grace.

The idea extends into Austrian economics and free market liberalism, both of which Dr Skousen is a strong proponent… and avid proselytizer. “The world economy has been at sea without rudder,” he muses. Skousen:

Free-market followers are convinced that the instability and crises existing in the world economy today are caused not by free enterprise, as the government interventionists would have us believe, but by government intervention itself, and that there are numerous benefits, both personal and national, that can come from adherence to hard-money principles.

Meanwhile, tremendous investment opportunities are created by these volatile government policies, opportunities from which intelligent investors can profit.

This approach is different from most Austrian economists, who spend most of their time fighting the powers-that-be and trying to change the markets at the institutional level. Rather, the waltz à la Skousen encapsulates the idiosyncrasies of a flawed market, accepts them, then turns a profit. Consilience, if you will.

Once you recognize the essential “booms and busts” of the stock market, the expansion and contraction of credit and debt, interpreting signals from the media and from the perspective of people around you becomes easier.

There’s a danger in not accepting that booms and busts exist: it’s the “fear of missing out” (FOMO) at the gala. FOMO has led a lot of “investors” into “hot” investments such as crypto, meme stocks and SPACs. Some are good investments. The plurality, not so much.

“It’s generally more prudent to ‘get rich slowly,’ since investments that offer huge growth potential also tend to carry more risk and therefore bigger odds of loss,” says Joseph Bert, No. 95 on the 2022 CNBC Financial Advisor 100 list. “But people try to hit the home run,” he continues, “which is like winning the lottery in investing.”

When the “primary trend”– as our friend Tom Dyson from Bonner Private Research calls it– is in your favor, the pickings are relatively easy. Stock market and crypto gains minted a million new “notional millionaires” during the Pandemic.

There were a number of sensational rallies, from Musk’s dogecoin skyrocketing 12,000% “to the moon!” in May to the “meme stocks” like Gamestop and AMC seeing their prices increase more than tenfold in February, led by the Reddit brigade online.

But this kind of talk should not whet your appetite for taking on risky investments this year. Another passage from Skousen’s book, which remains ever-prescient today:

Because of this sense of self-preservation, we are keenly interested in building our net worth, to protect ourselves in this age of economic uncertainty. But we are not just profit-seekers, out to make a killing in the marketplace at anyone’s expense. We do look for speculative opportunities from time to time, but more often than not, we are defensive investors, primarily concerned with protecting what we already have from the triple threats of inflation, taxes, and government regulation. As Dick Russell says, “The person who wins is the one who loses the least.”

Investing in stocks, bonds, real estate – heck, all asset classes – always carries some risk. Making smart investments is a matter of taking the right steps, and sometimes taking the lead. And it’s always a good idea to keep your eyes on the primary trend.

P.S. “Making money can be rewarding and of true value,” Dr Skousen moralizes a bit, “if it is used to preserve our quality of life. But it can also be sterile and useless if we do not use some of it to protect the foundations of our economic and political freedom.”

P.P.S. The winning Power Ball ticket for $2.04B was sold in California… wait, both my son and one of my newest and best writing associates are in California. If the Wiggin Sessions go dark suddenly, you’ll know why. Just sayin’.