“I contend that financial markets never reflect the underlying reality accurately; they always distort it in some way or another and the distortions find expression in market prices. Those distortions can, occasionally, find ways to affect the fundamentals that market prices are supposed to reflect.”

Since 1971, the gap between Wall Street and Main Street has widened into what our Wiggin Sessions guest this week, Nomi Prins, calls a ‘Permanent Distortion’ or ‘America’s Great Distortion.’

One simple chart explains everything from the rise of Trump populism… to the progressives led by Alexandra Ocasio – Cortez… to historic, runaway Inflation, food shortages… and supply chain disruption.

One look, and you’ll recognize what she’s talking about: 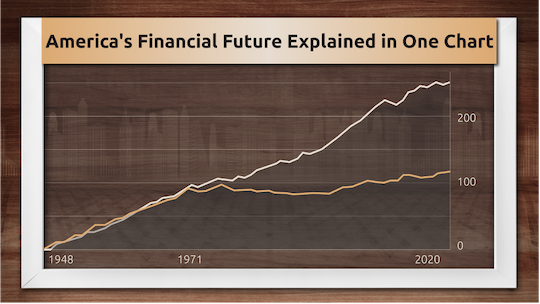 PhD Economist Nomi Prins warns: “Most Americans will be blindsided. But those who see it coming could earn a fortune.”

We were first introduced to Nomi by Jim Rickards nearly a decade ago. She’s a former Goldman Sachs Managing Director and best-selling author. Nomi has a PhD in economics and is a good person. Since we’ve known her, her analysis has been spot-on and jives with our world-view all-too-well.

In 1971, The Nixon Shock – the breakdown of the Bretton Woods gold peg to the U.S. dollar – was, to Nomi’s point of view, the catalyst that started the distortion of the American financial system..

The distortion became more pronounced in 2008 when the Federal Reserve turned on the printing presses and bailed out the banks.

And America’s Great Distortion became permanent when the Fed added trillions to their balance sheet as a response to the Pandemic crash and forced lockdown of the global economy.

The Fed’s reactions, along with inflation, shortages, and conflicts overseas have caused many in the mainstream media to sound the alarm on a stock market crash.

In her bestselling 2018 book, Collusion, Nomi Prins agreed, predicting an epic crash worse than the 2008 disaster. But since she made that prediction, she’s seen the Fed’s actions, leading her to change her mind about a crash and to make a new prediction.

“If you listen to the mainstream media in the days ahead, you’ll be left behind. We are about to see a crisis – but not the kind of crisis most people expect.

It has nothing to do with a market crash.

Instead, we’re on the brink of the greatest transfer of wealth in American history – worth $150 trillion.”

This transfer of wealth is being led by the U.S. Treasury Department (Janet Yellen), America’s biggest banks and corporations, and billionaires like Bezos and Musk.

The goal? A complete transformation of America using the financial system as a tool for change. Some call it the “great reset” but in this case we don’t need the Davos Crowd or a band of European globalists to make it happen.

If you haven’t, you can view our Wiggin Sessions interview with Nomi on YouTube.

P.S. Beyond our own media outfit, Nomi Prins has appeared on Fox News, CNBC, CSPAN, PBS, Bloomberg, and BBC to share her analysis of the “greatest wealth transfer in U.S. history. She’s leveraged her contacts on Wall Street and DC to find out why this distortion is happening, and to follow the money and find out where it’s going in the months and years ahead.

She has also identified the #1 stock to play “America’s Great Distortion” – a new energy play — along with two additional stocks on the cutting edge of new infrastructure spending and new money. Her analysis is nonpareil – unparalleled. To help understand the opportunity she sees, she’s prepared a special report identifying these stocks, which you can find for free, right here.