An Appetite For Disaster

“In my opinion, your value increases by the number of fools who call you a fool,” adds reader William H. Yesterday’s Session with Gale Pooley this week has proven to be divisive in a number of ways. Even challenging some of our own predilections, as you’ll see.

“Finally, a data driven concept!” writes Ray W. “… that refutes the ‘world will end when population hits 2 billion, 3, 4, 5, 7, 8, 10…’. I first saw the 2 billion prediction in the 60s, now it’s up to 10 billion for the last few years. In spite of being wrong for 60+ years, these predictions are the basis of world wide political, economic, and social policy. It permits true believers to do anything.”

We promised yesterday we would dive deeper into the economic principle of “time-price” which Pooley puts forth as a data-driven measurement of abundance.

To break it down simply: “Time-price is just the amount of time it takes to earn the money to buy that item.” It is another way of orienting ourselves towards work and money.

The classical economist Adam Smith touches on a similar theorem in The Wealth of Nations, written in 1776: “The real price of everything… is the toil and trouble of acquiring it. What is bought with money or with goods is purchased by labor.”

Taking this notion – time-price and the hard labor it actually takes to make money you can spend – and juxtaposing it with the nominal, American dollar price of goods and services presents a unique and altogether revealing trend.

Take a look at this chart below, provided by the researchers at Human Progress, a Cato Institute project: 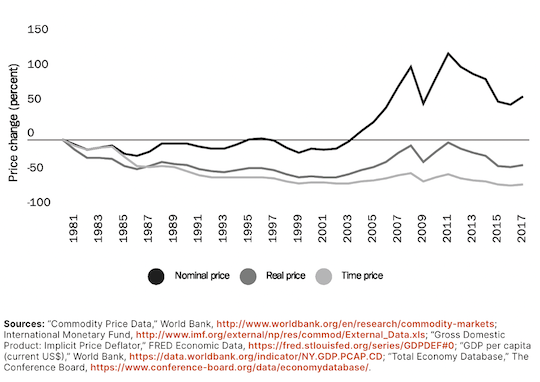 According to Pooley’s analysis, “The most recent update to our original study found that the average time price of 50 commodities fell by 72.34 percent between 1980 and 2018.” He continues:

Commodities that took 60 minutes of work to buy in 1980 took only 16.6 minutes of work to buy in 2018. Put differently, the time it took to earn enough money to buy one unit in that basket of commodities in 1980 bought 3.62 units in 2018. The compounded growth rate of abundance came to 3.44 percent per annum. That means that the affordability of our basket of commodities doubled every 20.49 years.

Now that’s just time-price mind you. If you look at the “nominal price” – or the dollar price – tracked in the chart in black, it rises, steadily, but for the financial crisis in 2008.

This means that despite a falling time-price and percentage cost of production for most goods and services, the number of dollars needed to acquire them increases.

Put another way, the dollar has steadily decreased in value. Even if, as we’ve been noting these past few months, the dollar index has gone way up. The dollar is worth an increasing amount when measured against other fiat currencies like the Euro, the British Pound, Japanese Yen, or just about any other currencies on this big blue ball. But when you go to actually buy something… not so much.

We just call it the Demise of the Dollar. 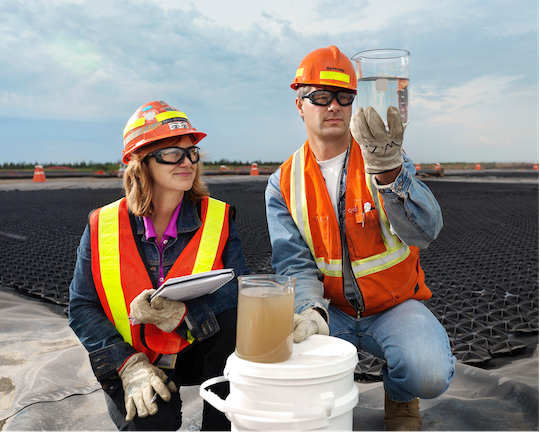 Are we running out of resources? (Source: Syncrude Canada LTD)

So, “are we running out of resources?” Pooley asks.

Many scholars, including Thomas Malthus and Paul Ehrlich, believed that population growth would result in the exhaustion of resources and a global catastrophe.

University of Maryland economist Julian Simon rejected their ideas. In his 1981 book The Ultimate Resource, Simon argued that humans were intelligent beings, capable of innovating their way out of shortages through greater efficiency, increased supply, and the development of substitutes.

In 1980, Simon and Ehrlich bet on the future price of $1,000 worth of five metals (copper, chromium, nickel, tin and tungsten). If the aggregate price of the five metals rose above $1,000, Simon would pay the inflation-adjusted difference to Ehrlich. If it fell below $1,000, Ehrlich would pay Simon. In spite of a population increase of 873 million over those 10 years, the five metals declined in price by an average of 57.6 percent. In 1990, Ehrlich mailed Simon a check for $576.07.

“Humanity’s impact on the planet is deep, but that does not mean that Earth’s future is hopeless,” Pooley concludes. That said, “humans have an appetite for disaster.”

Heh, you can say that again!

“The outcome of the Simon–Ehrlich bet…” write Pooley and coauthor Marin Tupy, “…and subsequent developments — instead of a global catastrophe, the world has become unambiguously more prosperous — did not diminish the world’s appetite for apocalyptic predictions. That should not come as a surprise….” The authors continue:

As Harvard University psychology professor Steven Pinker points out, humanity suffers from a negativity bias, or “vigilance for bad things around us.”

This bias may well be an innate trait, which came about as a result of natural selection. The Environment of Evolutionary Adeptness—a name that psychologists gave to a period of tens of thousands of years during which human brains developed—was much less hospitable to human beings than is the case today.

“Our modern skulls house a stone age mind,” as University of California, Santa Barbara, anthropology professor John Tooby and psychology professor Leda Cosmides put it. Consequently, there will always be a market for purveyors of bad news, be they doomsayers who claim that overpopulation will cause mass starvation or scaremongers who claim that we are running out of natural resources.

The Ultimate Resource, and Pooley’s idea of Superabundance belies a deep and resounding faith in human ingenuity. It was refreshing to speak with him, to say the least.

P.S. If you missed this week’s Session, you can find it here.

Next week, we’ll be talking to James Howard Kunstler on his “Long Emergency” thesis which begins with “Peak Oil.” Stay tuned… and let us know what you think: you can write to us right here.