Here’s the thing about a crisis. Once you’re aware… you begin to see it everywhere.

Yesterday, I asked Bill Bonner what he thought was the most pressing issue in the world right now while recording a Session for YouTube. He replied without hesitation: energy. Once abundant. Now, expensive… or non-existent.

“In Europe, today,” Bill said while speaking to us from his country house south of Paris, “electricity is priced as if oil was trading at $1,000 a barrel.”

Today, every news source is breaking the story of a European Energy Crisis.

This crisis has been toxic for months. If not bubbling for years. We talked about it with James West in April… and Mark Rossano in May… As always, Jim Rickards has proven prophetic.

With the ongoing Russian – Ukraine conflict and the cold months of a European winter in the forecast, the crisis is grabbing mainstream headlines.

“Germany’s predicament is an example of ‘bad decision-making, basically,’” Ganna Gladkykh, a researcher at the European Energy Research Alliance, told Wired Magazine in an article published this morning. Gladych continues:

The chill is coming for all European countries, and the idea that countries are all in this together may dissipate when the going gets tough. This crisis will stop the liberalization and integration process, and we’ll revert to each state looking at its own security of supply and energy markets.

The problem is what the European Union Institute For Security Studies calls “the energy trilemma.”

The goal is to balance energy security, affordability, and sustainability. With all the hubbub around the flagship European Green Deal and their net-zero emissions target… what they’ve actually produced is an imbalance in the trilemma. Sustainability has upended security and affordability.

Yesterday, French President Emmanual Macron proclaimed in a speech on the Champs Élysées the “end of abundance” and a “great upheaval” in the months to come. He’s talking about “sacrifices” the Free French will have to take to survive the coming winter. 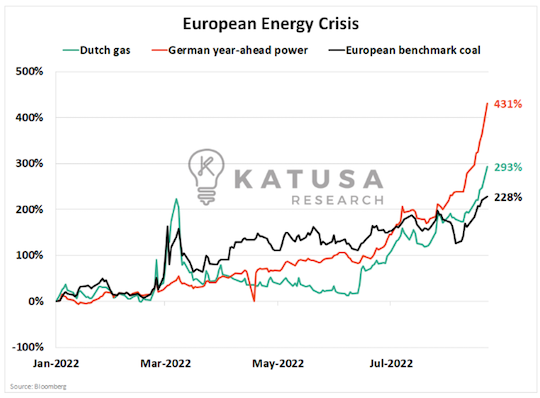 “With costs soaring,” Katusa writes, “this will put immense pressure on downstream users of power consumption. Power-heavy industries like manufacturing, refining, and petrochemicals all will face major cost surges. We are seeing the effect on productivity in real-time.”

Germany has, belatedly, passed a law to bring back oil-and-coal-fired power plants into the country’s energy mix in case of a critical gas supply situation.

But Europe may be the canary in the coal mine for what to expect in the U.S. According to Zero Hedge, one in six Americans are already behind on their electricity bills.

“Winter is coming,” as the popular saying goes. Americans, who are themselves fairly comfortable with abundance, may also find themselves the victims of bad-decision making, basically.