”As we’ve seen in technologies like solar and lithium batteries, any technology can change, with improvements in costs that are very impressive.”

The sun isn’t always shining… and the wind doesn’t always blow. So any grid built around renewable energy sources will need something to pick up the slack.

Nuclear reactors offer the greenest solution, as we’ve been exploring this week. But the current models are built to generate a consistent amount of energy. It’s hard to rev it higher when the solar panels quit, then slow the process down when it’s sunny again.

The excess is wasted, Justin Huhn says, because “we don’t have sufficient grid storage.” That’s why he’s very excited by “small modular reactors.”

While these smaller generators require uranium that is more refined than what’s commonly used, “they won’t need to be refueled for potentially 10 to 20 years, depending on the design,” Justin says.

They’re also built to store heat, which can “actually be brought back into the reactor core to cycle up and cycle down the output.” In other words, they’ll run a grid more efficiently even as other energy inputs surge and fade.

Best of all, “they are essentially meltdown proof.”

Here’s a look at how our entire conversation progressed.

We took some time off to observe Independence Day. Hopefully you enjoyed Bill Bonner’s timeless essay on what freedom means in America.

It’s been 10 years since a 9.1 magnitude earthquake struck off the coast of Japan, creating a 120-foot tsunami that washed across Honshu island. Today, though, few people think about the 16,000-some people it killed… or the roughly $360 billion in damages it left in its wake. No — ask just about anyone what they remember most about the tragedy, and you’re likely to hear how the massive wall of water led to multiple meltdowns at the Fukushima Daini Nuclear Power Plant. Prices for uranium, the most common fuel for nuclear reactors, fell off a cliff. Even now, they’ve barely recovered. But this presents you with an incredible opportunity, according to my guest this week…

The European Union is moving to prove it’s more “enlightened” than the rest of the world by enacting its own version of the “Green Deal.” Officially called the Climate Law, the legislation seeks to make Europe “carbon neutral” by 2050. It spells out new rules for entire industries and introduces new taxes. One provision also creates a special category of bonds for projects that are deemed environmentally friendly. Of course, no company or municipality is actually required to issue green bonds… no one is obligated to buy them… and there’s no guarantee they’ll be successful investments. What’s worse, Germany has petitioned for a major exclusion to the EU’s green deal…

The United States has spent billions of dollars trying to establish a permanent site for spent nuclear fuel and radioactive byproducts. The most promising project was Yucca Mountain in Nevada… until stiff political opposition killed it. So we’re currently without a way to deal with one of the biggest drawbacks to nuclear power. When I asked Justin Huhn to address the nuclear elephant in the room, he admitted it is a concern… though “less of a problem than most people think.”

It was the final day of our final investment symposium, and Rick Rule had the floor. The leader of Sprott U.S. Holdings was leading the crowd to demand that we continue holding our annual events. When we weren’t able to comply, he simply started hosting his own symposium… in the same place, around the same time of year. While Rick stepped down as CEO of Sprott earlier this year, he remains on its Board of Directors. And now Justin Huhn tells us that Sprott is poised to revolutionize the uranium investment markets — possibly paving the way to much higher prices ahead. 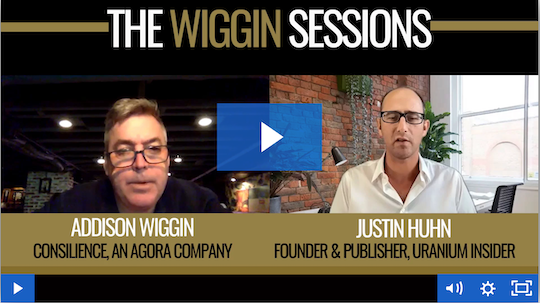 This was truly one of my favorite conversations — offering great insights into a topic few people know much about. If you’re inimical to the idea of nuclear power, Justin may change your mind.

Just click on the photo above to watch the whole thing.

P.S. Justin briefly touches on China’s nuclear power ambitions as well as an overblown story about a leak at one of its plants. The country also scared investors this week by placing restrictions on Chinese technology companies that trade on U.S. exchanges.

As you may recall, George Gilder has been bullish on China, so we were eager to get his take on things. While we couldn’t get our schedules to match, we have made arrangements to share what he’s telling his readers.