“Most countries have a powerful group of families ruling the countries by controlling the governments,” writes reader Bill M. He continues:

I believe that we have Keynesian Economics to facilitate the wealth transfer from the masses to this super-rich group of families. These controllers are the major owners of the equity in Corporate America. Our largest corporations are the cash cows providing the fiat currency to purchase influence wherever it’s needed.

Bill’s comment is one of the better descriptions I have gotten this week from asking our readers to think critically about who “They, the Elite” really are.

Families who in the Gilded Age of American decadence built up our cities à la Ayn Rand and created the funds that have supplied generational wealth for their families for decades to come. 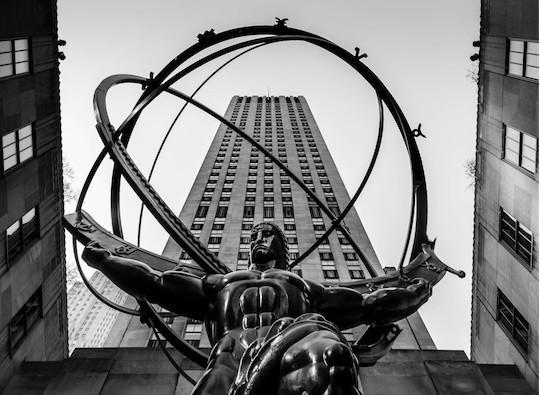 Who are the Rockefeller’s today? Write to me here. (Source: Siddhant Kumar)

The interesting idea I got from Ryan Daniel Moran this week: he believes the global elite are completely inept. Does that mean they are powerless though? Maybe they’re just wrong and still push their money around.

“I really would like to see someone in ‘authority’ take the bull by the horns and stop some of the negativism,” writes reader Sibbett S. “And start to look for changes which would be helpful to all sides of the argument! Does anyone really believe those in authority really understand basic economics?”

Whether you understand basic economics or not, one thing is clear: there is an obvious disconnect between how the Average American lives their life and how the so-called elite live their lives.

During the American Revolution, the lack of representation was rejected with violence. Today, the ideals of the republic have kept our bonds intact. For now. January 6, notwithstanding.

“Democracy is that form of political constitution which makes possible the adaptation of the government to the wishes of the governed without violent struggles,” writes the Austrian political economist Ludwig Von Mises in his tome, Human Action. He continues:

If in a democratic state the government is no longer being conducted as the majority of the population would have it, no civil war is necessary to put into office those who are willing to work to suit the majority. By means of elections and parliamentary arrangements, the change of government is executed smoothly and without friction, violence, or bloodshed.

Government by a handful of people depends on the consent of the governed, i.e., on their acceptance of the existing administration.

They may see it only as the lesser evil, or as an unavoidable evil, yet they must be of the opinion that a change in the existing situation would have no purpose. But once the majority of the governed becomes convinced that it is necessary and possible to change the form of government and to replace the old regime and the old personnel with a new regime and new personnel, the days of the former are numbered.

The insurrection of January 6th has been painted as a crime against democracy. But what if violence and revolution were actually written into the Constitution? “The tree of liberty,” Thomas Jefferson famously wrote, “must be refreshed from time to time with the blood of patriots and tyrants.”

Let me be direct: we’re not advocating or condoning any violence. Still, these are tough questions. Please write in and I will engage with your ideas here.

“A republic, if you can keep it,” replied Ben Franklin on being asked what form of government the Constitution created. Words well remembered as we wend our way into the holidays and the new year.

P.S. Is the economy on the brink of recession? What do you think based on the data below?