“There’s no such thing as free lunch.”

When we suggested on Monday that Mark Skousen was the closest thing we have to Milton Friedman on Monday, it was more of a comment about proximity.

Mark wrote back to us with a couple pictures. 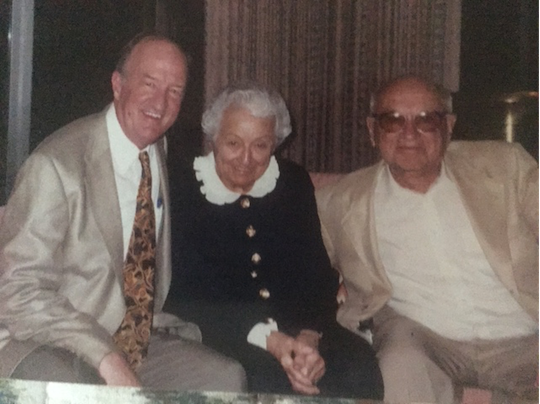 Mark, on the left, with Milton Friedman and his wife and fellow economist, Rose Friedman.(Source: markskousen.com)

Here he is, too, with Milton at dinner just before the great “monetarist” died on November 16, 2006 in San Francisco. Mark believes he may have been the last person to have dinner with Milton, at least out on the town. 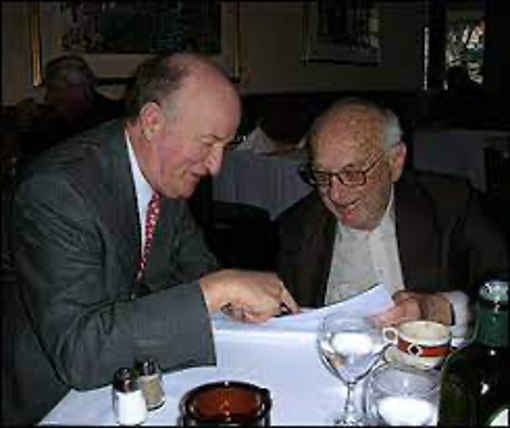 Today’s missive is a little self-serving, so bear with me if you will.

Milton sponsored Mark to a couple of meetings with the Mont Pelerin Society. The Mont Pellerin society is so named because when the economist Frederich von Hayek assembled the first one to promote free markets at the close of World War II. They held it in Mont Pelerin, Switzerland.

To join the club, so to speak, you have to be sponsored twice. Mark was sponsored by Milton Friedman twice in the 1980s and has been a member since.

The good doctor Skousen said during our Wiggin Session he’d be willing to sponsor me for the next two. The next meeting is in Bretton Woods, New Hampshire. (Ahem). The one after that is in New Delhi, India.

Granted, I’m not much of a joiner. But an august group of economists such as these guys who believe in free markets and limited government, well, that is a group I’d be willing to join.

Like I said, self-serving. But that’s not a bilious motive in my book.

P.S. Tomorrow we’ll introduce FreedomFest, an annual festival where “free minds meet to celebrate great books, great ideas, and great thinkers in an open-minded environment,” hosted by Dr Mark Skousen himself. Not to toot our own horn, but we’ve been featured twice in the Atlas Film Festival at FreedomFest 2008 and 2011.

Plus, we’ll introduce you to an exclusive new project we have in the works. Stay tuned.