“Every Four or Five Generations”

““The loss of public interest, however, did not mean the end of world order aspirations. Quite the opposite; the ‘big idea’ of world organization remained active within elite circles, largely operating beyond the knowledge or concern of the public.”

This week we looked at two global systems that are getting an overhaul, whether they like it or not.

The good doctor warned us about the frightening places where central bank digital currencies (CBDC) could take us… and explained why Bitcoin offers an escape hatch. In his view, Bitcoin represents the natural evolution of real money.

Next we talked to Byron King about what’s happening in Ukraine and the world’s tepid response. Part of that has been due to the degradation of NATO — an organization that has struggled for a reason to exist ever since the Soviet Union went kaput.

Here’s how we teed up these conversations.

Ever since Nixon uttered the words, “we’re all Keynesians now” upon signing the act that closed the “gold window” in 1971, Fed policymakers have been just that: economists of the Keynesian persuasion. Their first question is what “the government should do in order to make the economy better, in order to fix unemployment, in order to prevent inflation from being too bad.” (And now, what should the central bank do to avert climate change?!)

The Austrians, however, “look at individuals as the decision-making units, an approach based on reality as it is.” They see “economics as the product of human action,” not an outcome of political theory. Those different approaches are why the Fed’s policymakers are so obsessed with statistics. They’re looking for “scientific relationships that will hold across space and time for how these numbers will work with each other.” Dr. Saifedean Ammous calls it “physics envy”…

“All conspiracy theorists are owed a huge apology,” reads a retort on YouTube. “Unbelievable.” The writer is commenting what we can only think is President Biden going off-script during an address to the Business Roundtable.

“Now is a time when things are shifting,” Joe spaketh. “We’re going to — there’s going to be a new world order out there, and we’ve got to lead it.” Now, it’s not really a shocking statement, is it? Unless, it simply reveals the president himself is a conspiracy theorist. The way he said it, too, was odd, like it’s a foregone conclusion. You might think he’d be emphatic about a mission to lead the new order, but what came out was more of a mumble; like the prospect of a New World Order is, well, boring.

“We’re at an inflection point in the world economy,” the President prefaced the comment, “not just in the economy, in the world.” Then, channeling our Session with Mark Moss, “one that occurs every three or four generations.” Biden then references a “secure” meeting with one of the top military “people” during which he was reminded that “60 million people died between 1900 and 1946.” Ho, hum. 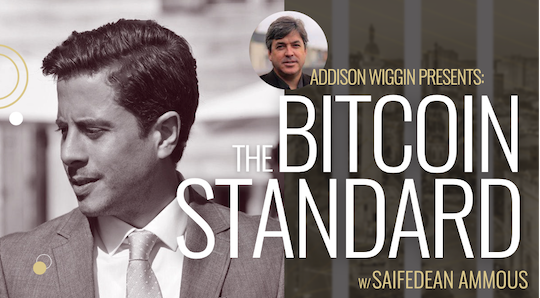 You can catch our full interview with Saifedean Ammous, right here.

A Broken “Theory of Victory”

Back in 1949, NATO was specifically created to counter the threat of the Soviet Union. Since 1991, there hasn’t been much of a need for the organization.Yet our “ride or die” treaty with the bulk of Europe remains intact 31 years after the Warsaw Pact fell apart. Just a decade ago, policymakers were questioning whether Russia should be considered a threat. Former Secretary of State Madeleine Albright, who died yesterday, dismissed the idea as absurd in 2012… before changing her mind a few years later.

No doubt Biden and his peers will spend some time congratulating themselves for keeping the band together all this time. Russia’s actions prove NATO has been necessary all this time, right? Hmmm… Byron King, my guest for today’s Session, was on the staff of the U.S. Chief of Naval Operations around the time the Soviet Union fell apart. Since then he’s witnessed NATO redefine its raison d’etre time and again… eventually, self-justifying its way into a bloated, unsustainable bureaucracy.

There’s a moral conundrum facing all of what Bill Bonner has been calling the Enlightened Elite Establishment (EEE).

On March 9, two weeks after the Kinzhals started raining down on Ukrainian military targets, and prices for gas, natural gas and oil all starting spooking the administration, Secretary of Energy Jennifer Granholm begged domestic companies to increase production. When pressed about the obvious, the secretary declared, “we can walk and chew gum at the same time” by pursuing both fossil fuel and renewable energy strategies.

Fuel for heating homes in Northern Europe this winter seems a tad more urgent than a stick of Wrigley’s while on the way to her next press conference. But what do we know? Although, you have to admit, the answer is a skosh better than suggesting that folks who are complaining about rising gas prices should just “go buy electric cars.” “All these sanctions that people are feeling really good about right now are going to come back and bite us on the hind end.” 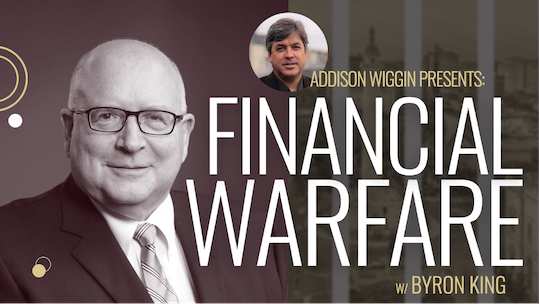 Get our full conversation with Byron King, here.

Behold: two entertaining and informative conversations with writers with unique perspectives. Just click on the pics above to be whisked off to our YouTube page.

P.S. Here’s an uplifting thought for the weekend from our friend and Wiggin Sessions alum George Gilder:

Time-prices are the only true prices. They’re a measure of economic progress, combining both the rise of incomes and the decreases in time required to buy market products. This is all due to the advance of innovation.

While the world population increased 73%, the prices of 50 key commodities of life, measured in the work hours to buy them, dropped 71%, and their abundance grew 518%. As the population grows, commodities grow yet more abundant per capita. The human population does not burden the planet; it proliferates its bounties. More people means more abundance.

Through war and government largesse, we endeavor to persevere.