During a recent stop off in Baltimore, our founder and my erstwhile writing partner, Bill Bonner, asked his closest friends – and the sharpest minds in the Agora universe – two simple questions:

What is the state of the world right now? And what are you doing with your own money?

This week we’ll give you the responses we think provide the most insight, so you can avoid rash decisions and forge a judicious, tempered strategy through what promises to be turbulent markets this fall.

“With all dips like this people get overly fearful,” Mayer comments. “If you look back over time, they just kind of fade away in the little dips on the long-term chart.” 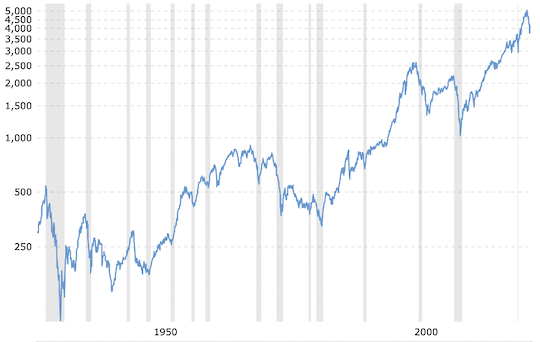 We’ve discussed stoicism before… maintaining a cool head amidst chaos and concern.

Let’s push back against Mayer a tad. Is it right to discount recessions entirely – highlighted in gray in the chart above – and still “buy the dips”?

To put it bluntly… aren’t we just drowning?

One of the things I’ve learned in my nearly thirty years of investing is that when you have times like this, buy the best stuff. I remember 2008 when the market was cut in half, and there were all kinds of stocks you could have bought for trading at cash, or very low multiples earnings.

The best investments were to go and buy the best companies and the companies that you always wanted to own but were too expensive. So, if you would’ve bought a MasterCard or Visa in 2008, held it, you’ve done phenomenally well.

These are the kinds of stocks I’m looking at.

Maybe not drowning… treading, and getting tired.

I admire Mayer’s sentiment, and think his outlook is apt for the moment. “Buy the business,” Buffet would say “not the price.” The idea is that a good company has a strong “internal engine” firing and firing through recession. Chugging along.

I know for a lot of people, it’s hard because they take their cues from stock prices. But if you really pay attention to what’s going on in the business, you’ll see that they just get more appealing as they come down in price. And people don’t realize how quickly valuations come in.

The markets opened down this week as last week’s rally waned.

Day by day the media heralds a rally. Then laments a recession. Then gasps at new inflation numbers. A rising tide. A receding wave. A riptide.

Meanwhile, we wait for volatility in the markets to subside, and take a page from Mayer’s book by holding on to or looking for new good companies.

One thing we can guarantee for this week, the media is going to be all lathered up by the Fed as central bankers descend on Jackson Hole, Wyoming for their annual confab.

Stay tuned for more from Bonner Private Research. Tomorrow, we’ll catch up with Jim Rickards, fresh back from his own briefing at Bretton Woods. For Jim’s next adventure, click here.