Inside the Financial Contagion 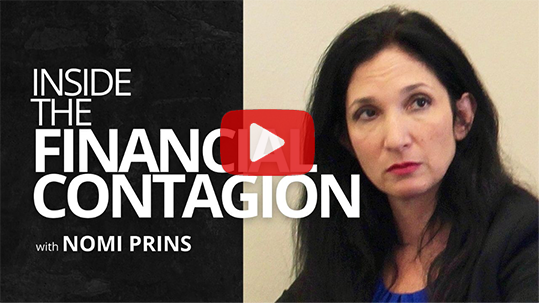 This week on TWS: “Central Banks are crushing the Real Economy” proclaims Nomi Prins, PhD in economics with an emphasis on central banks. She was the former managing director at Goldman Sachs.

Nomi’s concern right now is that we’re entering a crisis similar to the one which wiped out her mother’s retirement savings in the early 2000s.

Good news if you’re an American going to the pub in London today, though. That £2 pound pint used to set you back as much as $7 when sterling was approaching $2.50.

The pound tumbled to the lowest level since 1985, sliding 3.5% in the third-largest drop in 20 years. The move was partially in reaction to a new stimulus plan introduced by the UK government. The “growth” plan includes tax breaks and other stimulus similar to those Trump put into place during his presidency in the U.S.

Americans! Drink up to the new PM, Liz Truss!

The selloff in the pound is a symptom of what’s known as “cross-asset” trading the world-over. Money managers in big banks and hedge funds were selling riskier assets and buying up the American dollar. As a result, “the dollar soared to a two-decade high,” writes Lu Wang in Bloomberg, “tightening financial conditions for a slew of borrowers in the developed and emerging world, while causing Japan to intervene to support the yen for the first time since 1998.”

After last week’s rout, Intel, the semiconductor giant, is down 45% on the year – the Dow’s biggest loser. Tech stocks as a bloc are down over 30%. Each of the major indices – the Dow, S&P and Nasdaq – are all down 20%-ish… i.e. bear market territory.

“The financial markets are trading based on what they see the Fed doing,” we observed in this week’s Session with Nomi Prins, “but the impact on the ‘Real Economy’ is even more direct. It’s impacting real people trying to finance their own lives.”

While there’s no sign of panic in our everyday lives yet, the danger is that what Nomi calls “financial contagion” will set in.

My conversation with Nomi Prins is a good one. It avoids sensationalization while still maintaining a distinct sense of urgency. We’ve written our way through two financial crises – the Tech Wreck and the Panic of 2008. This one feels like it’s shaping up to be worse… Click here to watch the latest Wiggin Session.

P.S. Markets move in cycles. Sometimes they get out of hand. From my experience, no one wants to hear it until the crisis has already begun. Then “psychosis” hits. Sporadic selling begets uncertainty. Then widespread “cross-asset” selling and pandemonium.