“I have but one passion: to enlighten those who have been kept in the dark, in the name of humanity which has suffered so much and is entitled to happiness. My fiery protest is simply the cry of my very soul.”

“I have the honor of knowing the last living officer from the French Resistance,” a reader tells us.

“His name is Michel Mockers. At 99, he is still an intellectual powerhouse. I have taken the liberty (with permission) to include his most recent work which summarizes his view on the vaccine.”

We have no way of verifying any of our reader’s claims… though we did find that Amazon sells a book called Rene’s War: Memoirs of French Resistance in WWII, written by one Michel Mockers. Our reader attached several screenshots of a book, including a page bearing the following declaration:

Last, still alive, Officer of French Resistance which helped the Allies fighting in France, I accuse the actual governments to ridicule the sorrows of WWII, which smashed Hitlerian Fascism, to replace it by a new Hitlerian Fascism. “If you do not do this… You will not…” This is a total negation of “Freedom of Speech and Opinion” of the Constitution. It demonstrates the intellectual level of those who pretend to govern.

Another page says “Fight Back. Tell them you will never vote for any vaccine-pusher.” 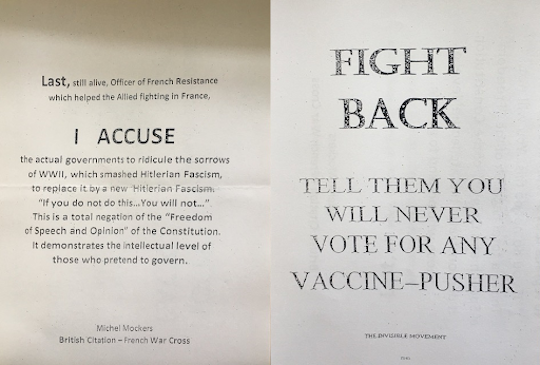 We’ve shared our thoughts about vaccine mandates, both at home and abroad. We’re vaccinated, but we view it as a choice.