“At that point I kept it really tight, short,” the leonine Dr Eifrig said in this week’s Session, talking about his beard. “But, I played college hockey.”

Like any good ice man he uses his beard as a way to gauge how good the season is going. “We got to 100 trades in a row without a loss,” he boasts, “and it was playoff season, Stanley Cup. And so I was like, you know what? Let’s let the beard grow.”

The streak is 140 plus trades now, so Doc’s looking ready for the Christmas season.

European markets start the week “muted” – meaning no up, no down– as investors continue to gauge the economic outlook of the coming months. That being said, some forecasters are pulling back on their earlier Eurozone growth projections.

‘’Recession in the eurozone is not likely to be as deep as had been feared,” said Susannah Streeter of Hargreaves Lansdown to the Financial Times. “The bloc is set to avoid a full-blown energy crisis this winter.” 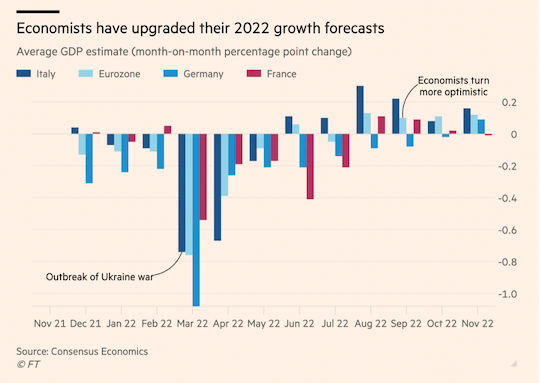 Over on this side of the pond in America, a similar tone. Stocks rise ahead of more “Fedspeak.” The world will once again tune into Fed-watching 101 to hear Cleveland Federal Reserve President Loretta Mester and St. Louis Fed President James Bullard for any potential hints on monetary policy moves in the coming months.

Most bets are on a 50 basis point increase as Powell and his posse have made no mention of a Bonner U-Turn, though the general consensus is that a rate hike slowdown is coming down the pipeline.

“Everything is pointing to disinflation in the US,” says Thierry Wizman, a strategist at Macquarie. “With that we will see a slowdown in the US economy in the first quarter of next year.”

Disinflation is slowing inflation, mind you. Not the end of inflation.

If you are haggard, tired, your beard may come in for different reasons than Dr Eifrig’s wins. What the heck, why not, winter is coming. As the frigid wind blows down Main Street and up through Wall Street, we all may feel rejuvenated for the year to come.

What do you think? Has your idea of things gotten better since the balmy news of disinflation sets in? You can write in here with your thoughts.

P.S. Markets are closed on Thursday and at 1pm on Friday, so we won’t be publishing any missives. Tomorrow, will be massive.