Hmn… let’s get this straight.

Today, one day into the emergency summit in Brussels, Joe Biden announced we’ve reached an agreement to help wean Europe off of Russian natural gas. So far, so good.

This is when the warm and fuzzies end.

Granted the president’s abacus probably has more zeros on it than ours, but when we slide the nuts around, we come up 140 billion cubic meters short.

Then there’s a matter of process. You need special facilities to liquify the gas and put it into cargo holds. The first LNG export facility in the United States, The Corpus Christi LNG export terminal in Texas, took six years to build at a cost of $15 billion.

Then it has to cross the ocean.

And once the LNG arrives at its destination, it must be “regasified,” which also requires purpose-built facilities. All that extra handling finds its way into the price… which the EU openly recognized.

“I know that eliminating Russian gas will have costs for Europe,” said EU Commission President Ursula von der Leyen. “But it’s not only the right thing to do from a moral standpoint, it’s going to put us on a much stronger strategic footing.”

And thus we come to the moral conundrum facing all of what Bill Bonner has been calling the Enlightened Elite Establishment (EEE).

On March 9, two weeks after the Kinzhals started raining down on Ukrainian military targets and prices for gas, natural gas and oil all starting spooking the administration, Secretary of Energy Jennifer Granholm begged for domestic companies to increase production. When pressed about the obvious, the secretary declared, “we can walk and chew gum at the same time” by pursuing both fossil fuel and renewable energy strategies.

Fuel for heating homes in Northern Europe this winter seems a tad more urgent than a stick of Wrigley’s while on the way to her next press conference. But what do we know? Although, you have to admit, the answer is a skosh better than suggesting that folks who are complaining about rising gas prices should just “go buy electric cars.”

Gas is also only the root of the concern. “Listen to what the farmers are saying about the price of fertilizer and price of herbicide and pesticide,” Byron King says in our latest Session, “all of which is made from natural gas, all of which will affect food prices.”

Basically, “all these sanctions that people are feeling really good about right now are going to come back and bite us on the hind end.”

Byron also gives an example of the administration refusing permits to build a road into a mine in Alaska that produces copper, nickel and lithium. All components needed to build electric cars.

It’s also a little surprising that Biden would be glib about sending oil and gas overseas, considering he has no interest in developing new domestic supplies.

“We don’t like automobiles that run on gasoline, so we’re not going to drill for oil,” Byron says.

Indeed, Biden and von der Leyen announced the creation of a joint Task Force For Energy Security. Its top goal, according to CNBC, will be to “diversify LNG supplies in alignment with climate objectives and reduce demand for natural gas.”

“News flash,” Byron says, “but the copper mining, the lithium mining, the nickel mining, the rare earth mining. It disturbs the environment somewhere. It’s all energy intensive somehow. And it’s not just mining, it’s production. Big bulldozers that move the rock or the explosives that blast the rock or the crushers and the processing and everything else that goes into it.”

Seriously, “what is their theory of victory?” Byron still wants to know.

“At some point,” Byron says, regarding the EEE’s moral superiority complex, “the adults are going to come back into the room and say to the woke mob ‘Knock it off… cut this crap out’.” He’s just hoping they do so before the economy is completely ruined and the middle class is wiped out.

If you haven’t listened to my full Session with Byron yet, you can find it here.

P.S. “We see with bemusement,” Vladimir Putin said in a speech on November 18th 2021,” the paralysis unfolding in countries that have grown accustomed to viewing themselves as the flagships of progress.” Credit where it’s due; we nicked this from Bill’s daily this morning. “Of course,” Putin continued, “it’s none of our business…

“…the social and cultural shocks that are happening in some Western countries… Some believe that aggressive blotting out of whole pages of your own history, affirmative action in the interest of minorities, and the requirement to renounce the traditional interpretation of such basic values as mother, father, family and the distinction between sexes are a milestone… a renewal of society.

“The recipes they come up with are nothing new… the Bolsheviks followed the dogmas of Marx and Engels. And they also declared that they would go in to change the traditional lifestyle, the political, the economic lifestyle, as well as the very notion of morality, the basic principles for a healthy society. They were trying to destroy age- and century-long values, revisiting the relationship between the people, they were encouraging informing on one’s own beloved, and families. It was hailed as the march of progress. And it was very popular across the world and it was supported by many. As we see, it is happening [again] right now…

“.. when great authors of the past such as Shakespeare are no longer taught in schools and universities because they [are considered] as backward classics that did not understand the importance of gender or race.”

P.P.S. As if the world didn’t have enough concerns about energy worries, there’s been an explosion at a Saudi Arabian oil depot — possibly the result of a missle attack. 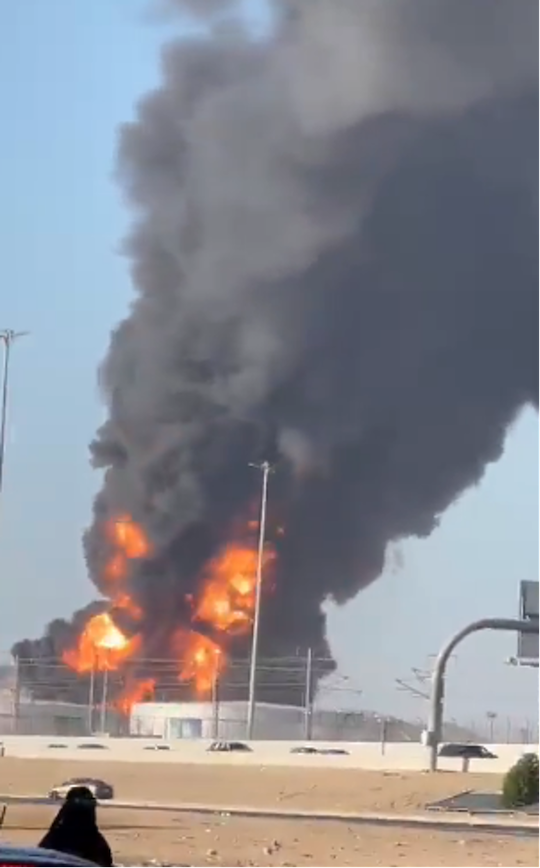 All that oil up in smoke. (Image source: Twitter.)

Saudi Arabia, which isn’t exactly a bastion of freedom and liberty, has been taking sides in Yemen’s civil war. They’ve sent in troops to bomb and hunt down Yemeni “rebels.” The Saudis are also in a marriage of convenience with the United States by the so-called petrodollars — the arrangement that prices the world’s oil in U.S. currency.

During our talk, Byron discusses why Saudi Arabia might decide to finally sever crude’s ties to greenbacks, including selling their oil to China in yuan.

“When you see a crack in a dam,” he warns, “don’t be downhill from that water.”