“Live free or die: Death is not the worst of evils.”

General John Stark, New Hampshire’s most decorated revolutionary war hero, was too weak to attend the anniversary of the Battle of Bennington in 1809, so he sent a toast by courier. It included the words “Live free or die: Death is not the worst of evils.”

The general had used an English translation of a phrase common in the French Revolution “Vivre Libre ou Mourir” which translates exactly.

The phrase became the New Hampshire state motto. And in 1971 was added by legislation to all non commercial license plates. “The motto is one of the 101 reasons cited by the Free State Project for the choice of New Hampshire as their destination,” a citation in Wikipedia tells us.

We tell you all this for several reasons. New Hampshire is my home state. My dad served for a time as the Sergeant at Arms of the New Hampshire state Senate. And when I spoke to this week’s guest, Jeffrey Tucker, he was attending and speaking at Porcfest, what he calls the “Hippie Gun Convention” in Lancaster, New Hampshire which he described as a “gathering of 3,000 gun-toting hippies.”

Tucker said it’s the only conference he doesn’t miss each year.

“One of the good things about this event is nobody knows entirely what it is,” Jeffrey, who is the founder of the Brownstone Institute, says “but 3,000 people are here, and so far everybody’s just hearing talks about random topics and buying from vendors and milling around… and starting a bonfire late at night. I guess they do it because they think it’s a way of being free.” 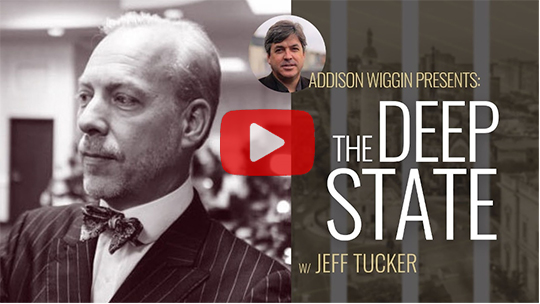 This week’s Wiggin Session:
Jeffrey Tucker on the development of the “administrative state” outside the purview of politicians and the judiciary… Click here.

We bring the New Hampshire state motto up, for this reason also. We were involved, inadvertently, in what might be construed as an historic moment yesterday.

We were helping move Henry, our son, out of his apartment near Washington Square in New York City. The square was the site of a fairly sizable protest following the Roe v. Wade decision on Friday.

Then, yesterday, the Pride parade was happening.

The Stonewall Inn – the site of the “Stonewall Riots” in 1969 – is considered the “beginning” of the LGBT rights movement.

The Inn is only a couple of blocks away from Washington Square. With Roe v. Wade getting overturned and the first in-person Pride parade in two years, you can imagine the energy in the neighborhood.

While we were building banker’s boxes and packing dishes, people were on the streets, living free.

P.S. Yesterday was hot in the city… 95 degrees. But the throng was peaceful. For the most part folks walking about looked happy. Not a lot of signs or jingoism.