We’ve got Empire on the brain.

“That bit about the Queen was good,” writes reader John M. “Short, and to the point.” We’ll have to apologize, then, if today’s missive reads a little longer.

“A study of history…” John M continues, “…and the witnessing of what your wife recorded today, tells us that this monarchy is ‘marching’ on.” He continues:

Remember, in the 60’s, Queen Elizabeth was the wealthiest human on the planet (forget what Wikipedia says). This was because of her vast monarchy, which slowly was “given away” to create sovereign nations.

Now, the monarchy has ritual significance that will always translate to “power”. Power to influence. Power to help us to continue to evolve in a “civilized” (morally structured) manner.

Long live the King, then.

We were reminded of Sir Halford Mackinder’s Heartland Theory by our friend Dan Denning over the weekend. You may recall, we first wrote about the polemic English geographer and academic when we interviewed Sean Ring of Rude Awakening back in April 2022.

Now, the idea is even more prescient. Today, Mackinder. Then, a twist.

Mackinder’s theory goes like this: The Heartland lies at the center of the World-Island, as pictured below, labeled “Pivot Area”: 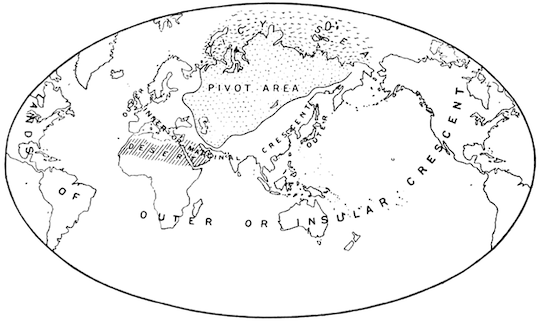 This map from 1919 looks more like a Flat Earth model than something that can be used to analyze the current state of global affairs. So why the heck would this Heartland Theory matter to us?

“I don’t want to overegg the pudding,” Sean Ring wrote in the Rude Awakening earlier this year when Vladimir Putin first demanded Russian oil and gas be paid for in rubles.

“Today will be remembered as the day power shifted irrevocably Eastward,” Mr. Ring continues. “Towards Mackinder’s Heartland and away from its periphery.”

In light of this week’s Session with James Poulos of The American Mind, I’d like to suggest another axis of power, outside of The Heartland, in the shadow of the American century.

“Technology and globalization seem to have trumped geography,” our friend Dan Denning writes in Bonner Private Research. “For the better part of the 20th century,” Mr. Denning continues:

…The Anglosphere—the English-speaking countries like the United Kingdom, Ireland, Canada, the United States, Australia, and New Zealand—were able to combine natural resources wealth with a rules-based global order (the US dollar as the reserve currency) and create an economic and financial system that raised standards of living and negated the ‘land power’ of the World Island.

Mackinder, however, surely did not anticipate what Poulos calls that other Wild West – the Internet! 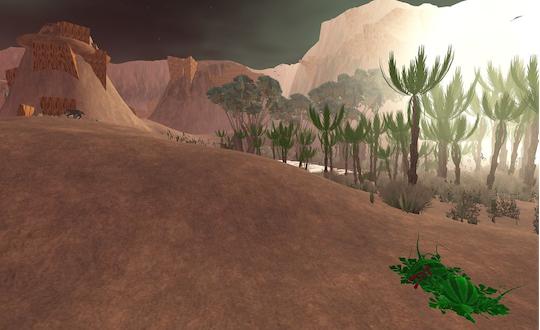 The new Wild West… online. Can you spot the difference? (source: Creative Commons)

To Poulos, the human animal is a species living between two worlds. But the line in the sand Poulos draws is more nuanced than Mackinder’s Heartland versus the Periphery.

The power that people find online – anonymous, amoral, pejorative, denouncing – shifts the balance away from the Heartland. Away from geography. Away even from real, tangible things.

With all the verdigris glint of swords and rifles this week at Windsor Castle, we wonder what the remnants of the British Crown will look like if we all have one foot in the metaverse?

Reader John M seems to think they’ll find a way to stick it out.

But maybe a better question is (since we are a financial newsletter): What actually matters to you more, investing in digital assets or the real kind?

You can write to me directly in response by clicking here. I’m curious to hear what you think.